Greenlight > Games > GromitJK's Workshop
Greenlight is being retired. For more information on how to submit games to steam, refer to this blog post.
This item has been removed from the community because it violates Steam Community & Content Guidelines. It is only visible to you. If you believe your item has been removed by mistake, please contact Steam Support.
This item is incompatible with Greenlight. Please see the instructions page for reasons why this item might not work within Greenlight.
Current visibility: Hidden
This item will only be visible to you, admins, and anyone marked as a creator.
Current visibility: Friends-only
This item will only be visible in searches to you, your friends, and admins.
Ludwig
Description Discussions1 Announcements4 Comments180 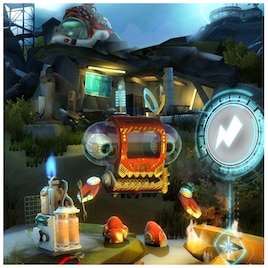 View Ludwig in the store

We´re happy to announce that we´re currently working on the chinese version of Ludwig! Ludwig is really excited about meeting new friends in China! Stay tuned - the chinese language version of the game will be released soon!

We also talked with Stephen from Greenlit Gaming about how we did Ludwig and some of our future plans. Check out the interview here.[greenlitgaming.com]

Valve has revolutionized the way in which independent developers can promote and distribute their games. Using Valve’s very own STEAM service, STEAM Greenlight connects PC gamers and independent developers together to provide developers with the opportunity to showcase the games that they are creating, while also allowing the STEAM community to vote and select which of these games they want to see released on STEAM. This collaborative system is mutually beneficial, as it is providing an avenue for developers to get their games out into the marketplace while providing PC gamers with the opportunity to have their voices heard regarding what games they want to play.

Greenlit Gaming is dedicated to covering the news surrounding STEAM Greenlight, and will strive to provide accurate and honest reviews of games that are released through Greenlight, while at the same time sharing with the community hidden gems that we believe deserve your votes and recognition. We are striving to promote STEAM Greenlight, it’s developers, and their games, so that we as PC gamers can enjoy these fantastic games that we may have otherwise never had a chance to play. Together, we can support those making the games we want to play.

Read More
Description
Release date: already available for PC (yet not on Steam)
Ludwig is a physics adventure on renewable energy for adventurers aged 11+.
FREE DEMOVERSION on https://www.playludwig.com/en

OVERVIEW
2098. Mankind has left the Earth and is now living in space colonies. Ludwig, a research robot from a faraway civilisation and his spaceship are looking for forms of new energy. Unfortunately, mankind´s new space colonies are not listed on his interstellar maps, which results in a fatefull crash with the physis, the biggest station with a billion inhabitants. The crash does not only tear a huge hole into the physis´ protective cover, but also damages Ludwig´s spaceship badly enough for him to lose control of it and crashland on planet Earth. Now it´s a race against time.

Will Ludwig succeed and get his spaceship going in time to save the physis?

WHAT THE GAME IS ABOUT

WELL KEPT SECRET
Psst. It´s a physics learning game on renewable energy.
But does it look like one? Judge for yourself.
Still interested? Watch the TEDx talk to see why we spent all our passion in creating a serious game which is fun to play. Thank you for voting!
Popular Discussions View All (1)

sergioreynel Nov 19, 2013 @ 4:55pm
Hi if your looking for a site to download all pc related things go here: www.pcgameiso.com/ if you create an account if you could please put my username inside the referrer box: my user name is sergioreynel

Ludwig has been Greenlit and is now listed in the Steam store. For the latest information, purchase options, and discussions for Ludwig, please see it on the Steam Store or in the Steam Community.
Visit Store Page
For more details Visit Community Hub
For latest discussions
If you really, really want to, you can continue to the Greenlight page. Information on this page may be out of date, since all the action has moved to the areas noted above.