Store Page
Overgrowth > Guides > kavika's Guides
This item has been removed from the community because it violates Steam Community & Content Guidelines. It is only visible to you. If you believe your item has been removed by mistake, please contact Steam Support.
This item is incompatible with Overgrowth. Please see the instructions page for reasons why this item might not work within Overgrowth.
Current visibility: Hidden
This item will only be visible to you, admins, and anyone marked as a creator.
Current visibility: Friends-only
This item will only be visible in searches to you, your friends, and admins.

Hardware specs you need to run the game

Setting up your system for games

Revert the game install back to "bare metal"

Settings to try if you are desperate

Comments
Hardware specs you need to run the game
To run this game well, you do need a fairly okay gaming computer. Just because your computer has Windows 10 doesn't mean the game will run.

The bare minimum specs for Overgrowth are those that are listed on the store page:
- Passmark 500 GPU ("video card"), with OpenGL 3.2 capability
- Passmark 1000 CPU ("processor")

These are the absolute minimum to run the game. You'll probably have to turn off every setting, and even then the game probably won't run at a high frame rate, or with high visual quality.

The specs needed to run most games comfortably these days is at least 5x these Passmark ratings, and that is also true for Overgrowth. You can consider Passmark GPU of ~2000 and CPU of ~5000 as a "gamer bare minimum", as of 2017. Even then, you won't be able to play some games, and you won't be able to max out settings.

One recent, popular game that I just checked lists their minimum required specs at Passmark rating of roughly GPU ~4000, CPU ~7000

Revert the game install back to "bare metal"
Computers are pretty reliable these days, but they can still mess up your data. The game's install files and temp files should be cleaned up before trying to debug any other problems, and you should get rid of any mods that might also be causing problems.

How to restore the game to "factory default": 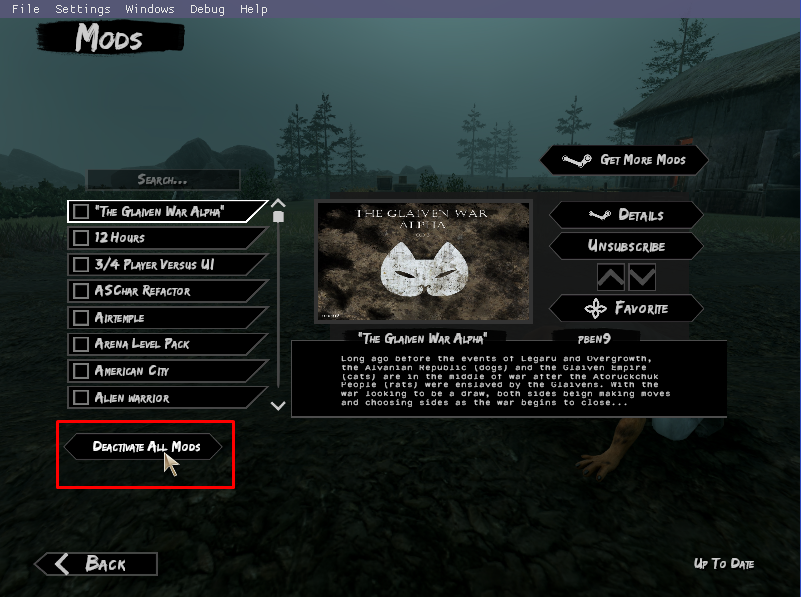 2. Disable all mods: Launch the game -> Main Menu -> Mods -> click Deactivate all mods -> quit out of the game to save the setting

3. Make sure your install is not corrupt: Verify integrity of game files

Make sure you do all of these things, in this specific order.

Lowest graphics settings
If your performance is hurting, it is best to turn the graphics down to their lowest possible setting first, and only then start dialing things back up.

To do this, open the game, click on Settings on the main menu, and make sure you are on the Graphics tab. Set all these options below, and see if the game has better performance for you: 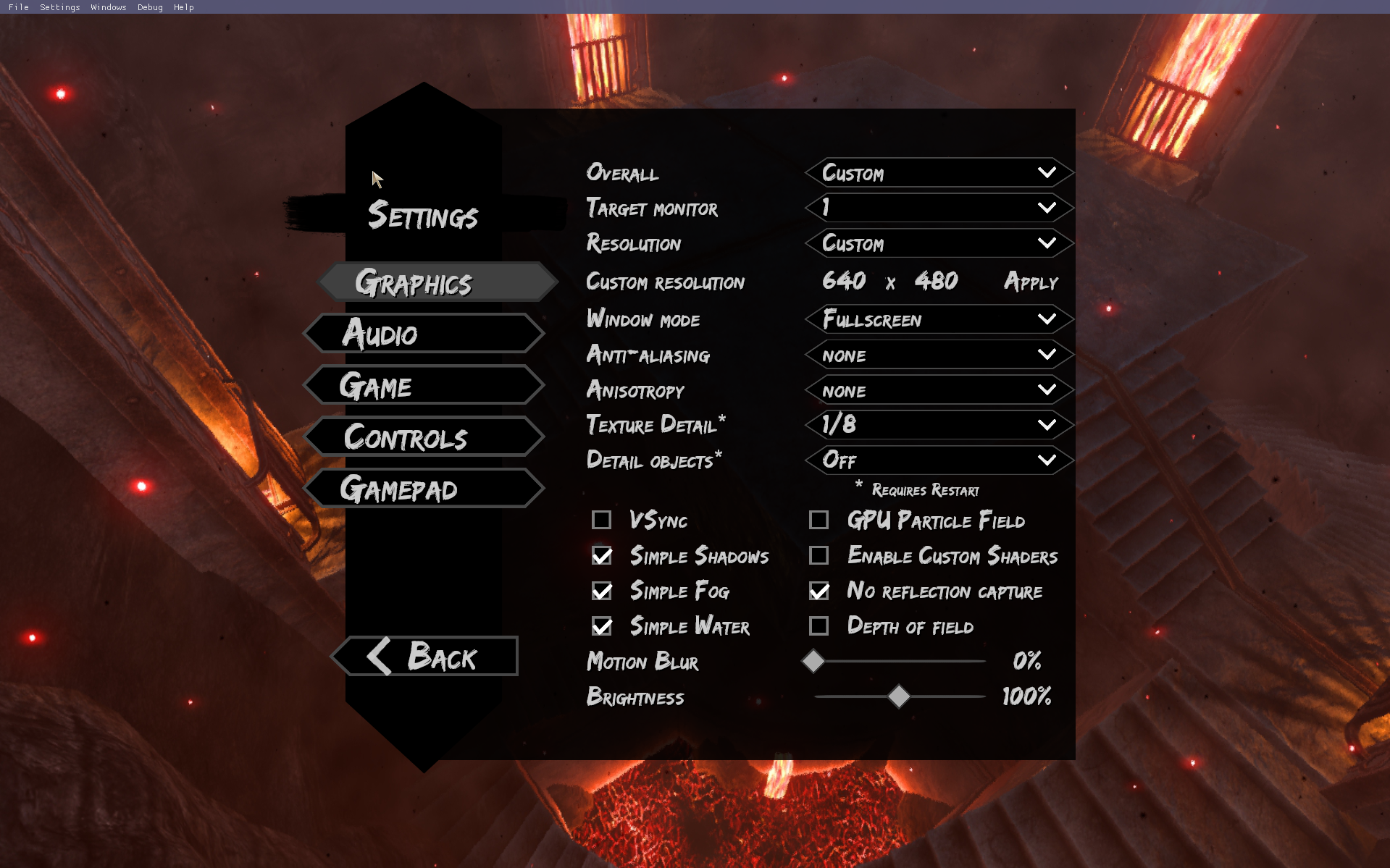 Once you've made these changes, restart the game to make the texture detail setting take effect.

Note that "Target monitor" doesn't show up unless you have more than one monitor, so don't worry about that setting. If it shows up, just make sure you run the game on a monitor that is connected to your best GPU.
Settings to try if you are desperate
If you have a very low end computer, at the minimum requirements, or even lower, there are a few extra graphics settings you could try that might make the game run.

Be warned that turning these settings on will make the game look terrible, but they could make the game actually run on a non-gaming computer, or a very old computer.

http://steamcommunity.com/sharedfiles/filedetails/?id=946277210
Before bothering with any of these settings, make sure you've turned down all the normal graphics settings to their minimum as shown in the previous section.

So, for the absolutely lowest possible graphics settings, turn on these options:

These are accessible in the debug menu, under:
Top Bar -> Settings -> Debug -> Graphics 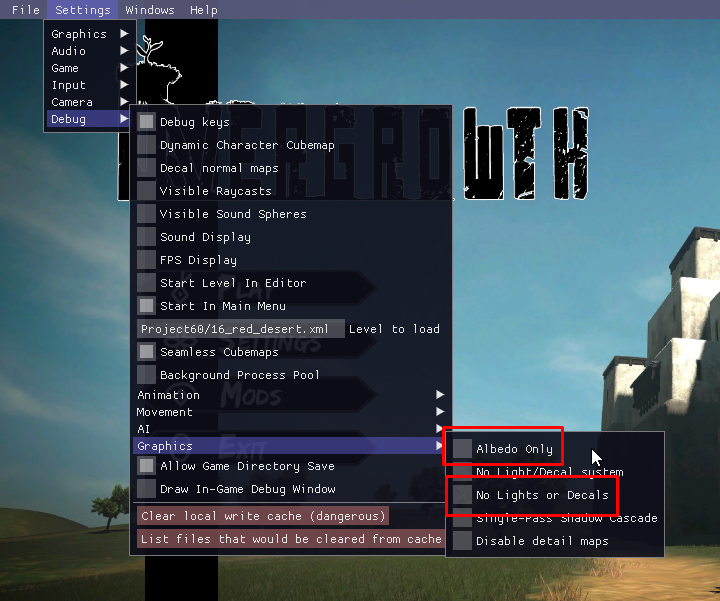 Pro tips for measuring game performance
As said above, if you're trying to improve performance, it is best to start at a bare minimum configuration. Then slowly increase the quality, one setting at a time, until the game hits a nice level of performance that you can live with.

It is also best to measure results for each settings change, so you know which settings have the most impact. And of course, take into consideration the visual impact each setting has on the game as well.

You can get somewhat detailed measurement of the game's performance by turning on Show Frame Rate and Frame Time: 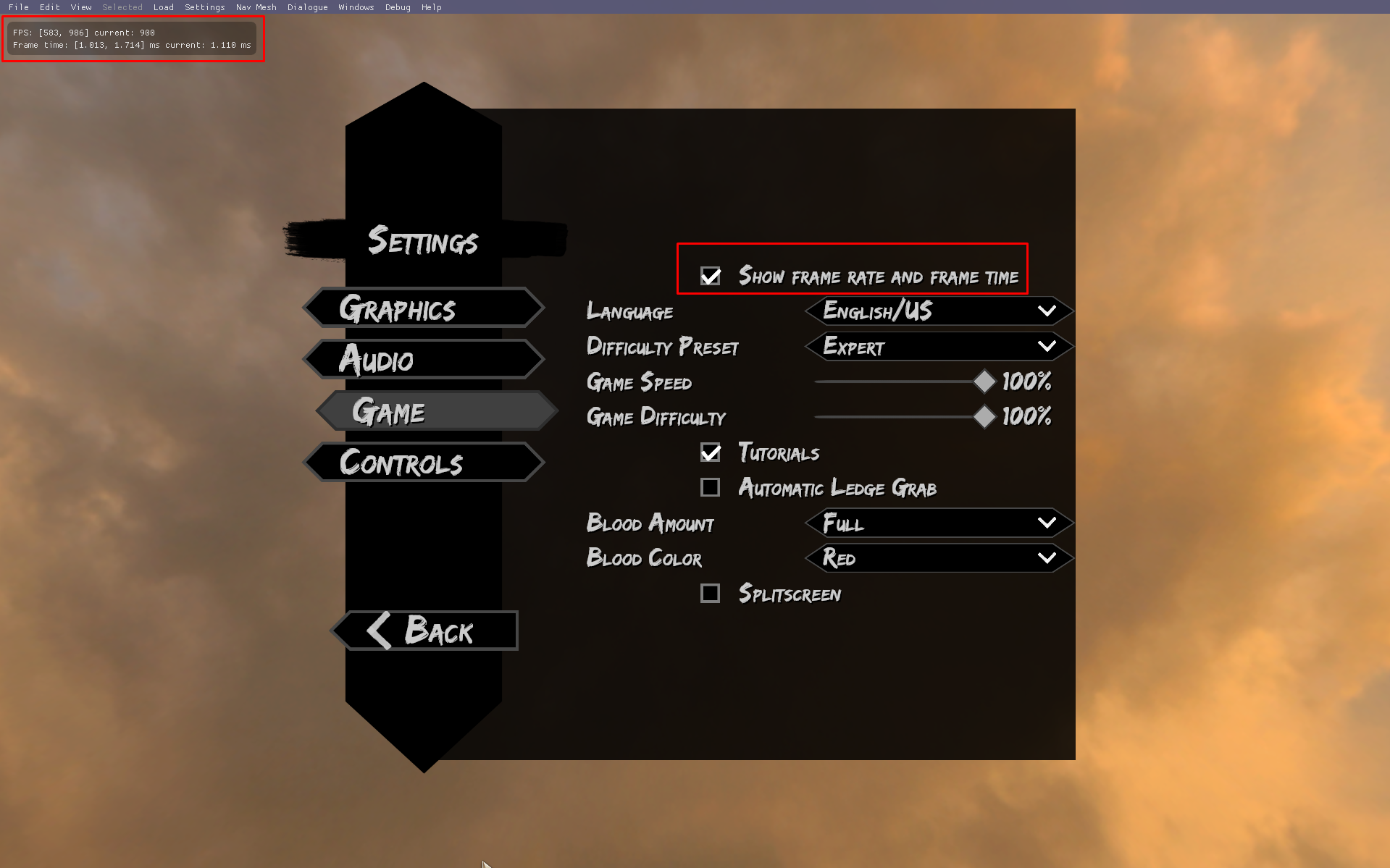 In this window, you see the [Minimum, Maximum], and Average ("current") performance values, for the previous second. It shows both FPS and Frame Times.

FPS (frames per second) vs Frame Times
Don't use FPS to measure performance, if you can help it. Use "frame times" instead.

The problem with FPS is that it is a relative value. 5% of 40fps is 2fps, but 5% of 120fps is 6fps. This means that you can't directly compare graphics settings to each other based on how many FPS they give you, without a lot of mathematical gymnastics.

There can still be cases of graphics settings that combine to be worse when they're both enabled (they multiply instead of adding. An example would be using both higher detail objects and higher detail lighting at the same time). Using frame times will still make it easier to do the math than if using FPS.
Reporting performance problems
If you have a reasonably fast gaming computer, that has a Passmark rating of ~4000 for the GPU, and ~8000 for the CPU, then the game should run decently for you, with medium settings. You should be getting at least 40fps or higher with a computer like this, in most cases.

If you find a part of the game that is particularly slow, or find that certain effects or graphics settings throw off your performance significantly (and it isn't resolution or anti-aliasing), then you should probably report it. That way Wolfire might be able to investigate it and see if they can make a fix.

To send in a report, gather these files together:

Here's a page describing where to find your logfile.txt and hwreport.txt. The config.txt file is in the same directory as the hwreport.txt - http://wiki.wolfire.com/index.php/How_To_Report_a_Bug_in_Overgrowth

Also, please include a description of where exactly you are in the game, in case we can't recognize it from the screenshot.

Once you've collected this info, please attach it all in an email to bugs@wolfire.com
Alternate builds
If you want to try to get a bit better performance, and don't mind having a potentially less stable game, then you can try playing on one of the pre-release game builds. Sometimes we have optimizations that aren't in the stable build yet, and you can preview them there.

To use a pre-release build of the game:
Steam -> Game Library -> Right click on Overgrowth -> Properties -> BETAS tab ->
switch from NONE to some other build. 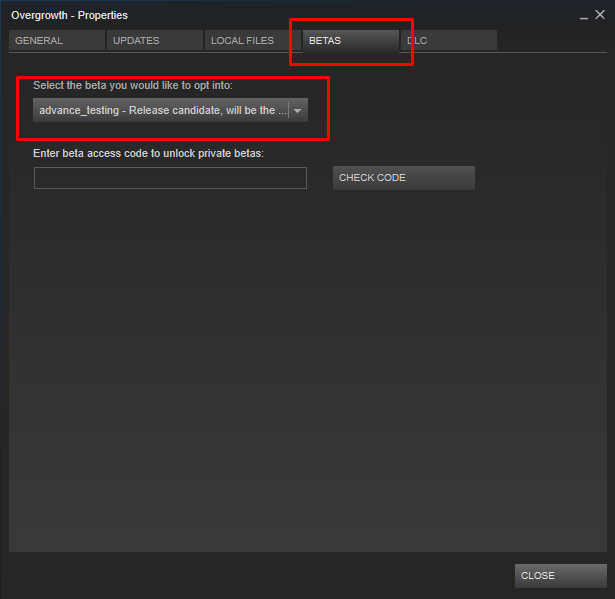 Here are the two most relevant pre-release builds:

Wynter the Blu Foxx Jul 4, 2017 @ 4:47pm
Kavika, I unfortunately don't have access to the Steam version so the newest build I can play is B3.

Halzoid98  [author] Jul 4, 2017 @ 1:23pm
You can always test out the other builds, such as internal or advanced testing, or even revert to the previous alpha to see if performance improves for you.