Store Page
Garry's Mod>  Workshop > Reverend V92's Workshop
This item has been removed from the community because it violates Steam Community & Content Guidelines. It is only visible to you. If you believe your item has been removed by mistake, please contact Steam Support.
This item is incompatible with Garry's Mod. Please see the instructions page for reasons why this item might not work within Garry's Mod.
Current visibility: Hidden
This item will only be visible to you, admins, and anyone marked as a creator.
Current visibility: Friends-only
This item will only be visible in searches to you, your friends, and admins. 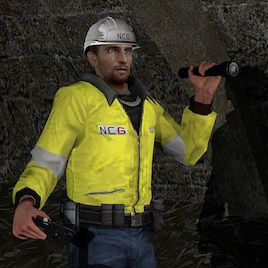 This item has been added to your Subscriptions. Some games will require you to relaunch them before the item will be downloaded.
In 1 collection by Reverend V92
[V92] Character Models

28 items
Description
Hey, I found a corpse.
That's not funny Mark
A custom-made model of the player character from INFRA, Markku 'Mark' Siltanen, senior engineer at the National Consulting Group in Stahlberg, Finland.

Tasked with documenting damages in Stahlberg's infrastructure, Mark soon finds himself in a battle for his life with the deep-rooted schemes of the past...

If you haven't played INFRA, it's a Source game with major map design by Oskutin, creator of many well-known outdoor roleplay maps. INFRA is available here! Go buy it, and play it because it's a fantastic game!

The shaders on his high-visibility stripes actually reflect pretty well considering I don't have access to the L4D2-style reflective belts used on the road crew zombies.

Would've been like that in INFRA itself, then. All I did was convert them from BGRA8888 to DXT5.

It worked when I first added it. I don't use TFA stuff at all, so if it doesn't work now I wouldn't know.

The hands use the default GMod citizen combo arm hand texture. I could see the issue, though. I've been meaning to take a quality look at it. I could do a tweak to the colourations.

I updated it afterwards. The one appearance of Mark in the game is on a poster wearing a blue flannel/chequered pattern like that, and I realized that after the initial release.