Greenlight > Games > Les's Workshop
Greenlight is being retired. For more information on how to submit games to steam, refer to this blog post.
This item has been removed from the community because it violates Steam Community & Content Guidelines. It is only visible to you. If you believe your item has been removed by mistake, please contact Steam Support.
This item is incompatible with Greenlight. Please see the instructions page for reasons why this item might not work within Greenlight.
Current visibility: Hidden
This item will only be visible to you, admins, and anyone marked as a creator.
Current visibility: Friends-only
This item will only be visible in searches to you, your friends, and admins.
Age of Fear: The Undead King
Description Discussions0 Announcements3 Comments95 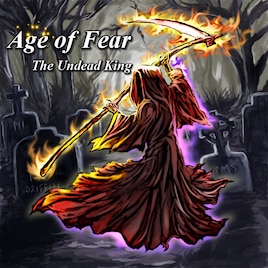 
New version v1.9.5 has been just released! (in Downloads section on our page www.age-of-fear.net)

We are preparing release for Steam, so expect more upgrades coming soon!

after long break, there is another release of Age of Fear.

Version is currently available in our downloads section:
http://www.age-of-fear.net/index.php/aof-downloads

(Demo is available on game homepage!)

The story takes place in an untamed fantasy land, where three forces: the Human Kingdom, the Greenskins' Horde and the Undead Legion - are fighting for domination and survival.

You will encounter quick skirmishes, where wise unit's cooperation is essential. You will visit distant lands either as a honorable knight or an evil necromancer. You will conquer cities and destroy ancient evil!

Age of Fear: The Undead King is available for Windows, Mac OS X and Linux systems and your serial key is fully interchangeable between versions!

Originally posted by James Allen, Out of Eight:
Age of Fear succeeds because of its combat: using units to protect fragile allies, incorporating hex-based mechanics without the geometric restriction. The result is some satisfying strategy, choosing which units to move and carefully keeping your army intact and away from open avenues for the enemy. (...)
Speaking of the AI, I found it to be quite competent: it takes advantage of openings to attack frail units, retreats vulnerable ranged units, and uses special skills intelligently. (...)
Age of Fear delivers some nice strategic gaming recommended for fans of turn-based fantasy titles!

Originally posted by Metacritic score 8.6:
As a Mac user I do not enjoy so many games, therefore I was happy when I saw this indie title from my favorite genre and I have bought it on spot. After finishing both campaigns and spending several hours in skirmish battles, I can say the game gives lot of fun for 10 pounds. (...)
I wish there were more games like this.

another Age of Fear game has been greenlit!
We are working on transferring it to Steam.

I just found out that our other game - AoF2: The Chaos Lord has been greenlit!

Thank you all!
Les