Greenlight > Games > Discipol's Workshop
Greenlight is being retired. For more information on how to submit games to steam, refer to this blog post.
This item has been removed from the community because it violates Steam Community & Content Guidelines. It is only visible to you. If you believe your item has been removed by mistake, please contact Steam Support.
This item is incompatible with Greenlight. Please see the instructions page for reasons why this item might not work within Greenlight.
Current visibility: Hidden
This item will only be visible to you, admins, and anyone marked as a creator.
Current visibility: Friends-only
This item will only be visible in searches to you, your friends, and admins.
The Underground King
Description Discussions10 Announcements6 Comments398 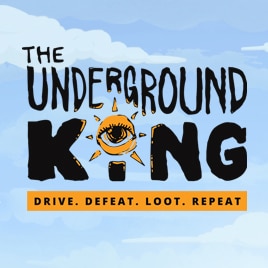 Discipol
Offline
See all 81 collections (some may be hidden)

View The Underground King in the store

Greetings all, the game is now available! And at a discount.
Bugfixes have been done and are our highest priority, as well as quality of life improvements.
We're always looking for feedback and if you encounter problems, we have a Discord, as well as monitor Steam forums.

We invite you to take a look and get a key or two for yourself, you deserve it ;) Much love!
https://store.steampowered.com/app/1198900/The_Underground_King/

It's been 3 years (and a month) but we're finally ready for an Early Access release.

Steam has already approved us with the current state and we're fixing the last of the bugs and tweaking values.

I can't express how exhausting but exciting this entire process has been, and we're hoping you join us on what we assume it will be at least 12 months of open development through EAccess.

Pop a visit to our page and Wishlist to get notified on the faithful day of 16 July! It will also help us with Steam's algorithm.

In other words TUK is a management, strategy, racing, choose your own text adventures kind of game, with permadeath, random generated world and stats, unique heroes, customizable abilities, world bending effects made to slightly change your gameplay experience each time you start a new game session... and so on!

Boot up the game, acquire a vehicle and a driver and then you are free to explore this randomly generated universe. No hand holding, no unnecessary interruptions, no cutscenes!”

We strongly believe that this is a good time for The Underground King to be experienced by players. Early Access is a convenient conversation starter between us (providing you with game updates) and the community (providing us with feedback).“

Why should I trust you or that you will keep working on this game?
"We are aware that Early Access has a reputation and you shouldn’t trust anyone. Look for honesty in the product and in the effort that goes into making it.
For what it's worth, Alex and I have been working on this game since late 2016, juggling between being employees, husbands and indie game developers. This always was a way of life for us, both, and we deeply appreciate and say "Thank you!" to anyone that joined and will join this bitter-sweet adventure."

For how long will this game be in Early Access?
"About a year. We plan to have a content update every 2 weeks and a BIG upgrade or addition to the game every 2 months. We have a lot of features planned out on top of the core gameplay but only player support will help us materialize them."

How will the full version look like?
"12 bosses, each unlocking an unique type of vehicle, driver class, city area and mission types. The core gameplay will remain the same in the final version. Also something hush-hush that will come as an exclusive bonus (and a "Thank you!") for our early community."

How many hours of gameplay can I expect for now?
"Even for this first playable build, we estimate for an average of 3.5 hours PER playthrough for a accustomed player. Take that and multiply it by random and permanent world effect that bend your experience during each game session. Now take that and multiply it by the random skills and stats for of procedurally generated drivers and vehicles... it might keep you engaged until the next big game update."

Will the game be priced differently during and after Early Access?
"Yes! The Early Access version comes at a lower price to reflect it's incomplete quantity. As we approach the full release we will be increasing the price accordingly to the newer and improved state."

Will the community take part in your development process?
"That’s what we hope for! Currently we are curious to see how the game behaves when played by a diverse crowd, with unique approach and strategy, and how immersive the experience can be for the player. We are looking for bugs, balancing issues, art problems, whatever might be considered a hindering issue.."

Much appreciated for taking the time and we hope to hear from you soon!
Alex Nae & Alex Nechita

The Underground King is a fun management, strategy, racing, text adventure, rogue-lite video game... (or a RACING ROGUELITE for short) set on a mysterious island obsessed about the racing scene, that has a simple core gameplay - Drive, Defeat, Loot, Repeat!

You wake up on an island, you get a coin, you meet a dude, you find a car, you get some fame, you hire a driver, compete in a race, get some coin, gather a crew, get some fame, get more coin, get more fame, get more coin, get more fame… You find a tree stump in the middle of an open field with a dead squirrel nearby and some rotten nuts. That’s weird?!Your driver starts bashing the tree stump with the dead squirrel, YOU‌ GET‌ SOME COIN, YOU GET SOME FAME, YOU GET SOME COIN!!!!

Everything is randomly generated! Global Effects, Vehicles, Drivers, Skills, Environment, Stats, Events, this, that, everything!

Make your own crew! Every driver has a special power-up, every vehicle has a special stat. Jam few drivers in any vehicle and create a unique experience for whatever race scenario you encounter.

The island is alive! Pick a skilled driver to assist you and discover this world.

Death is permanent and it might happen a lot, but who cares?! You will get rewarded either way!

Everything reacts to everything!Someone in the crowd throws junk at your enemy, but he has bad aim so it hits a trap nearby that triggers a spike wall, that blows a barrel, that destroys your vehicle, but somehow hurls the burning wreck through the air, passing the finish line first. Hey, look! You won!

The Underground King is being developed by Two-Eyed Cyclops Games, a video game company created by 2 indie game developers:

The artist of TUK! Alex, also known as Nick, worked over 10 years in the game industry as a designer and independent game creator. He said no to coffee for a while, but then crunch time said "Perhaps?!"

The programmer of TUK! Alex worked for most of his life on games, independently and hired. He learned computer programming in high school to impress a certain girl. It didn’t work.

P.S: If you still need to think about joining our community, please keep an eye out for future builds. We have already mapped out an update schedule available every 2 weeks from now, for the next year. It might grow on you!
Popular Discussions View All (10)

Discipol  [author] Mar 14 @ 7:38am
@Ikagura It is the last game submitted to Greenlight before Greenlight was shut down. Thus it is the most recent, thus it is the newest. Sure, it has been 4 years, but no newer game has (can) be submitted so, yeah :D

The Underground King has been Greenlit and is now listed in the Steam store. For the latest information, purchase options, and discussions for The Underground King, please see it on the Steam Store or in the Steam Community.
Visit Store Page
For more details Visit Community Hub
For latest discussions
If you really, really want to, you can continue to the Greenlight page. Information on this page may be out of date, since all the action has moved to the areas noted above.