Greenlight > Games > Joe King LLC's Workshop
Greenlight is being retired. For more information on how to submit games to steam, refer to this blog post.
This item has been removed from the community because it violates Steam Community & Content Guidelines. It is only visible to you. If you believe your item has been removed by mistake, please contact Steam Support.
This item is incompatible with Greenlight. Please see the instructions page for reasons why this item might not work within Greenlight.
Current visibility: Hidden
This item will only be visible to you, admins, and anyone marked as a creator.
Current visibility: Friends-only
This item will only be visible in searches to you, your friends, and admins.
Toad On Fire
Description Discussions0 Announcements3 Comments38

Joe King LLC
Offline
See the collection (may be hidden)

View Toad On Fire in the store

Store page
Recent Announcements View All (3)
Progress Update, June 2018
June 27, 2018 - Joe King LLC
Bug fixes! Bug fixes! Bug fixes!
In prep for releasing a new demo, I've been running through the game a lot, fixing what bugs that come up. There always seems to be something to fix. That's why I don't have a demo for this month; there was much more to fix than I expected.

With this update, I'll just highlight a few things I've been working on, whilst in the midst of fixing bugs.

New theme
I've been working on another theme. This one has mushroom trees and mossy walls. I still need to adjust the palette so it's not the same green/blue feel as other themes. 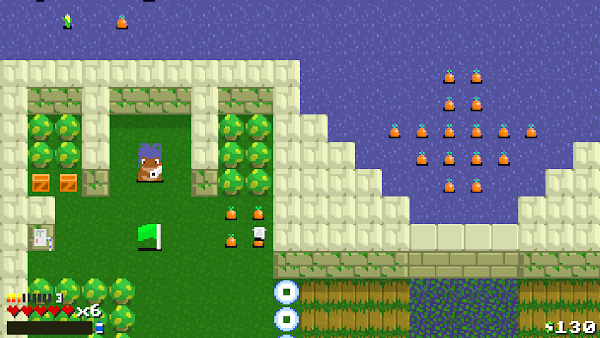 The Farm
At the very beginning of the game, you start on a farm. I added some flowers to give the look more variety and rows of corn stalks so it looks more like a farm. 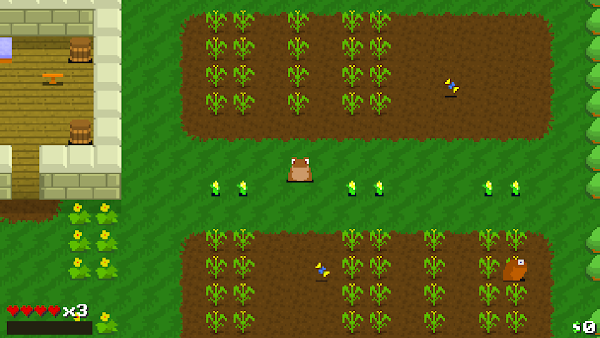 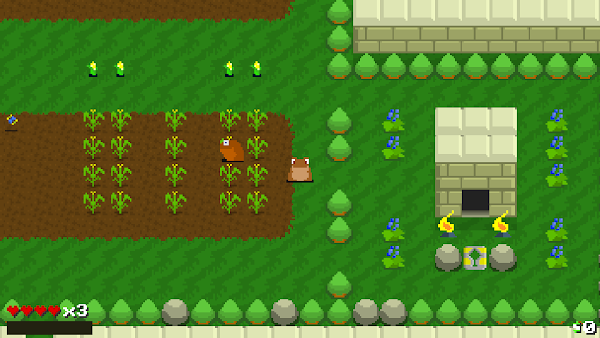 Finished a level
I completed one of the sky levels. Well, all levels are constantly being updated as I progress on the game. I guess I mean I have a path from the start to finish, and that it mostly feels complete. Near the end you need to fly through a gauntlet of mines and spiked balls. 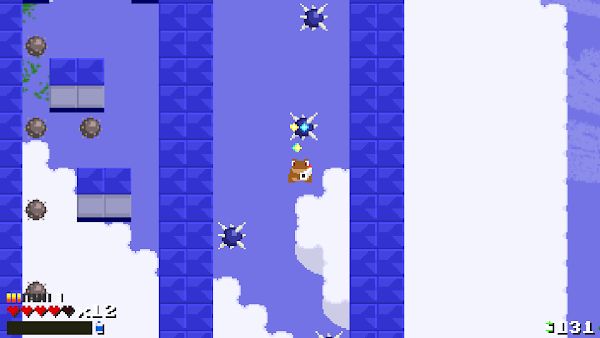 New! Purchase armor and suit up.
You can now buy armor from the shops for protection. I needed some more things for the player to spend money on, and this turned out to be a good investment of time. While worn, you only lose a half-heart instead of a whole-heart when hit. After enough hits, the armor will break and you'll lose it. You always have the option to purchase more armor afterwards. Ditched the palace/wizard levels
R.I.P palace levels. These were slower levels to give the player a break from all the action. Mostly it involved just going through a few rooms until you find the wizard, upon which the wizard give you a gift by casting a spell. Mainly it was just a way to level-up the player's max HP.

Why'd I get rid of it? As the game progressed, the pacing of these levels started to feel off, and they no longer felt needed since I added the shop levels (which also act as a break between the action).

The relationship between Smokey and the wizard kept getting more complex. There was a lot more to work on to get it feeling just right. I was about to add some more complexity and feature creep to it, but man, that would've been too much. I'm trying to finish a game, not keep this one going on forever. Sometimes, I think, you have to spend time finding what to remove as much as you spend time on adding things. It's a constant curation process. This was something that needed to be removed. It wasn't an easy decision, but I think it was the right one. Here's a few screenshots for keepsake. 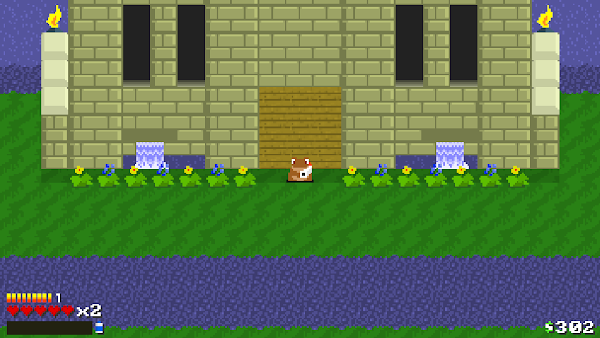 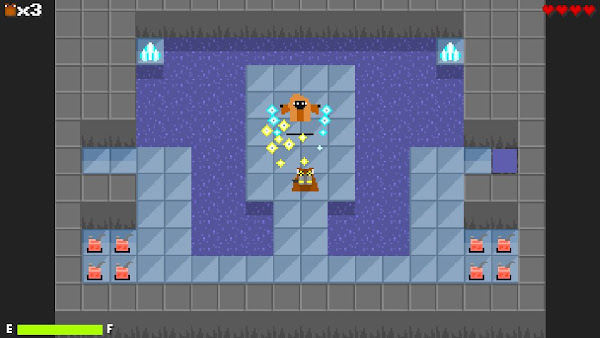 Earlier version of the wizard room, with him casting a spell to increase vitality. 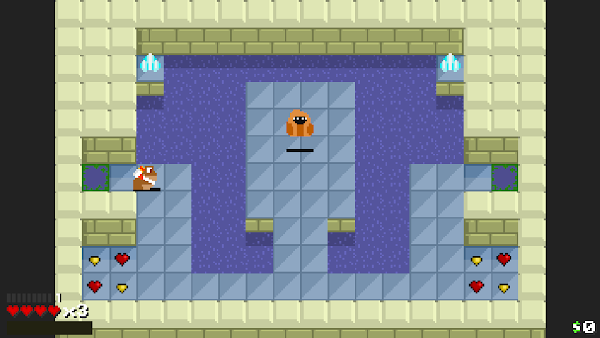 Newer version of the wizard room.

It's been far too long since my last update, but I have put a lot of work into the game since then. Here are some notable items.

New boss.
Checkout the gif below:

So far I have four bosses. I'm hoping to have a total of five for the finished game.

New move.
I call it the cannonball:

I added this move because I wanted some sort of trade-off between attack types. Rather than simply adding a more powerful weapon, this one gives you a meaningful choice: powerful cannonball attack but you change your position closer to the enemy, or stay back and fire as usual. It also offers a different traveling speed which allows for a more dynamic experience across the board.

New environment.
Well...actually it's one I've been working on for a long time. It's the sky levels where you fly around on your jetpack, exploring the tropopause, stratosphere, etc.: 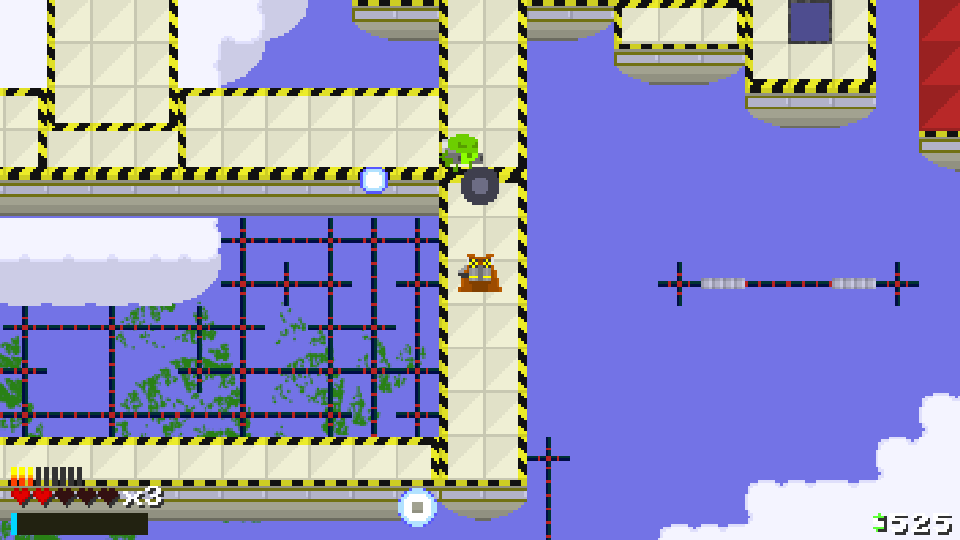 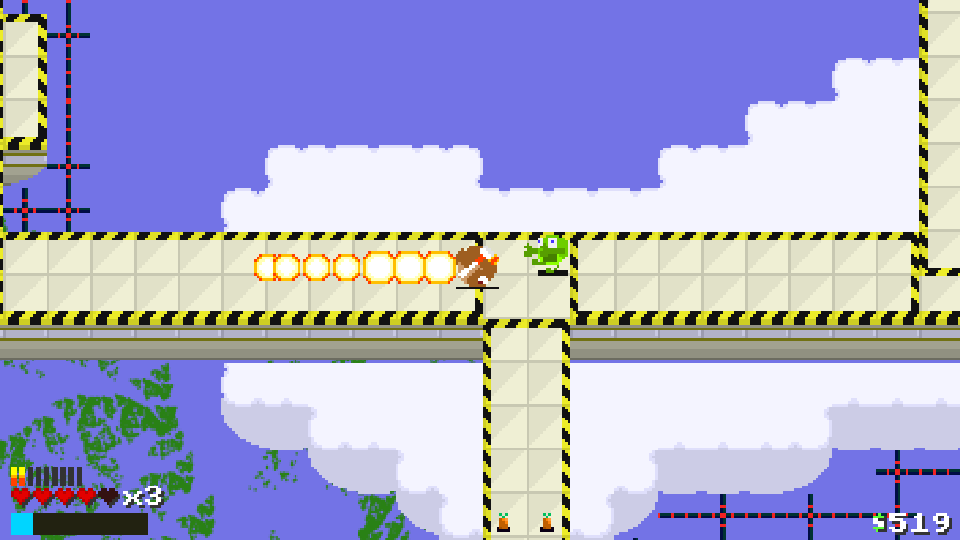 Read More
Description
Release date: Early 2018
Equipped with a flamethrower, progress many levels as you explore lands, torch trees to the ground, surf on lily pads, and set your enemies ablaze. Collect gems, purchase upgrades, discover secrets and characters on your journey across the world of Toad On Fire.

An army of frogs is relentlessly teleporting down from space onto the planet's surface. Their motives are unclear, but something sinister is driving them to wreak havoc upon the population of toads that live nearby. Smokey, a fellow toad who has a taste for pyrotechnics, grabs his trusty flamethrower and heads out to destroy the teleporter beacons that allow the frogs access to different points on the planet's surface. As he continues on, he is faced with greater dangers that lead him to the source of the chaos, something that threatens the entire toad population.

Joe King LLC  [author] Jun 26, 2017 @ 12:06pm
Thanks for the comments, everybody! I just posted an announcement/dev-blog. Still working to have a demo out by July. It'll cover most/all of World 1 (the overworld I have in one of the screenshots, says "palace" at the bottom).

tosac Jun 12, 2017 @ 8:00am
Hey Joe
I am adding you since, I would like to translate your game into Danish.
I am willing to do it for a very low price or free, depending on how big of a project it is.
I just finished a translation for Trojan inc. and are about to translate two more games.
Feel free to add me

Toad On Fire has been Greenlit and is now listed in the Steam store. For the latest information, purchase options, and discussions for Toad On Fire, please see it on the Steam Store or in the Steam Community.
Visit Store Page
For more details Visit Community Hub
For latest discussions
If you really, really want to, you can continue to the Greenlight page. Information on this page may be out of date, since all the action has moved to the areas noted above.