Store Page
Cortex Command>  Workshop > gabemo24's Workshop
This item has been removed from the community because it violates Steam Community & Content Guidelines. It is only visible to you. If you believe your item has been removed by mistake, please contact Steam Support.
This item is incompatible with Cortex Command. Please see the instructions page for reasons why this item might not work within Cortex Command.
Current visibility: Hidden
This item will only be visible to you, admins, and anyone marked as a creator.
Current visibility: Friends-only
This item will only be visible in searches to you, your friends, and admins. 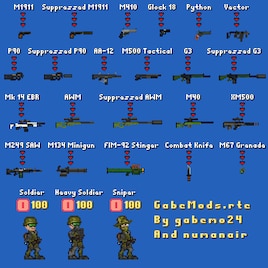 gabemo24
Offline
See all 82 collections (some may be hidden)

This item has been added to your Subscriptions. Some games will require you to relaunch them before the item will be downloaded.
Description
A comprehensive and balanced metagame-compatible faction with 3 different actors and 22 modern weapons, including a homing missile launcher with target interception, precision sniper rifles, P90's with visual ammo capacity, and 4 suppressed guns.

The actors of this mod are a regular soldier, a heavy soldier with an armored chest plate and gas mask which can be shot off, and a sniper with lighter armor and superior target acquisition.

This mod contains many weapons (full demo video: https://www.youtube.com/watch?v=Uu5v8IucjMI), which are:

- FIM-92 Stinger: This is a shoulder-fired seeking anti-aircraft missile launcher. It is quite unique in Cortex Command because it not only has a proximity fuze, making the missiles explode once close to the target instead of on impact, but it also intercepts its target by multiplying its target's vector by the distance to the target and aiming for this point. This makes the missile lead ahead of its target's position and reach the target at or near the intercept point. To make it clear that a target lock has been acquired, the Stinger makes a noise that sounds like the real lock tone of the FIM-92 system, as well as showing the text "LOCK" above the launcher. It also displays a red reticle over the craft to which it is locked on, as well as the flashing text "LOCK". Once the missile is fired, it shows a yellow circle around the target and a small orange circle at the calculated intercept point. This weapon wouldn't have been possible without numanair's assistance, so I'd like to give him a big thanks for collaborating to make the Stinger happen. Here is a demonstration of the FIM-92 Stinger: https://gfycat.com/PastelTemptingCaiman
For a full weapons demo, including the Stinger, see the video above.

- M67 Grenade: Fragmentation grenade with an animation to make it look like the spoon is released once it's thrown.

Pistols:
- M1911: Standard sidearm, decently powerful. Similar to the old Desert Eagle.
- M410: Shotgun revolver with 5 rounds of .410 bore shot, each with 3 pellets.
- Glock 18: Machine pistol with a high rate of fire and 17-round magazine. Sprays everywhere, especially if fired with one hand.
- Python: Powerful revolver with 6 shots of .357 Magnum. Very accurate and deadly over range.

Suppressed guns are quieter and functionally attract less attention than non-suppressed weapons, plus they're fun. These are:
- Suppressed M1911
- Suppressed P90
- Suppressed G3
- Suppressed AWM
They are just as accurate and deadly as the non-suppressed variants, as they use modern suppressors, but they are slightly heavier and more expensive as well as being longer.
< >
17 Comments

Heavy Jun 6, 2017 @ 10:08am
I like the spriting on the weapons, everything looks very sleek and consistent (except maybe the Mk 14 EBR). Your Heavy's FG leg also seems to lack some detail on the armor, BG leg has no armor at all. Overall decent aesthetic but no DL from me. Except for the Stinger which seems to have very nice functionality, everything else is all very much Coalition expanded. If you could do something to make these actors stand out from the Coalition (spriting/functionality) I'd give this a DL.