Greenlight > Games > DGSpitzer's Workshop
Greenlight is being retired. For more information on how to submit games to steam, refer to this blog post.
This item has been removed from the community because it violates Steam Community & Content Guidelines. It is only visible to you. If you believe your item has been removed by mistake, please contact Steam Support.
This item is incompatible with Greenlight. Please see the instructions page for reasons why this item might not work within Greenlight.
Current visibility: Hidden
This item will only be visible to you, admins, and anyone marked as a creator.
Current visibility: Friends-only
This item will only be visible in searches to you, your friends, and admins.
Eddy Violet
Description Discussions0 Announcements3 Comments174 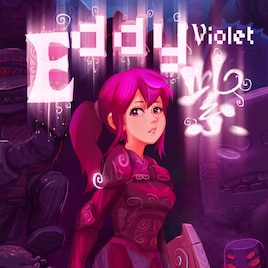 DGSpitzer
Online
See all 10 collections (some may be hidden)

View Eddy Violet in the store

I uploaded the game OST here:

Read More
Description
Release date: June 2017
"Eddy Violet" is an ACT game developed in the span of two years. I finished all the sections of game design by myself including 30 pieces of original music. The game is finished in my sophomore year, 2012 - after 5 years, now, finally got a chance to publish a Steam version! Six levels and bosses, five mini games and hardcore platformer all in one, I’m trying to bring the players a novel visual and intriguing narrative in play.

--- Story ---
The Great Mother eliminated the old world, re-established new order upon the science civilization’s ruins. She has been creating numerous energy-state lives and led the world to the completely new ecosystem.
But the Great Mother can’t destroy her own creations, which means that if those creatures rise in rebellion, god would feel helpless and the new world would return to chaos.

Eddy – the girl soldier of “Vortex Guardian” who have a half-energy and half-human body – is responsible for the peace of Beij District where the center of new world is located. Depending on her rapid recovery ability of Vortex Guardian, Eddy has extirpated a lot of enemies who was trying to overturn rules of the Great Mother.

However, at this time, an extreme dangerous usurper is coming from the horizon…

tosac Jun 15, 2017 @ 10:33am
Hey DGSpitzer
I am adding you since, I would like to translate your game into Danish.
I am willing to do it for a very low price or free, depending on how big of a project it is.
I just finished a translation for Trojan inc. and are about to translate three more games.
Feel free to add me (I'm only translating text)

Eddy Violet has been Greenlit and is now listed in the Steam store. For the latest information, purchase options, and discussions for Eddy Violet, please see it on the Steam Store or in the Steam Community.
Visit Store Page
For more details Visit Community Hub
For latest discussions
If you really, really want to, you can continue to the Greenlight page. Information on this page may be out of date, since all the action has moved to the areas noted above.