Greenlight > Games > Diana ♥ You's Workshop
Greenlight is being retired. For more information on how to submit games to steam, refer to this blog post.
This item has been removed from the community because it violates Steam Community & Content Guidelines. It is only visible to you. If you believe your item has been removed by mistake, please contact Steam Support.
This item is incompatible with Greenlight. Please see the instructions page for reasons why this item might not work within Greenlight.
Current visibility: Hidden
This item will only be visible to you, admins, and anyone marked as a creator.
Current visibility: Friends-only
This item will only be visible in searches to you, your friends, and admins.
TrueCombat:Elite
Description Discussions4 Announcements1 Comments474 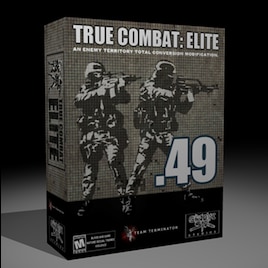 Diana ♥ You
Offline
See all 38 collections (some may be hidden)
Recent Announcements View All (1)
TCE has been Greenlit!
April 3, 2014 - Diana ♥ You
Thank you community!

A huge thank you to everyone who upvoted for TrueCombat:Elite[www.truecombatelite.com] to be Greenlit on Steam!

After 17 months on Steam Greenlight, it finally happened 1 hour ago!

Hopefully sometime in the future we will be able to provide this amazing game via Steam to a larger audience.

Regardless if this happens or not, thank you all for the opportunity to do so!!

For any updates/future developments, please follow True Combat on Facebook[www.facebook.com] and/or make an account on our Official Forums[www.truecombatelite.com].
Read More
Description
"This is no arcade..."

Originally posted by ModDB:
True Combat is an action packed realism mod where big jumps, fancy strafing and fantasy weapons are no where to be seen. Expect hard fought team-based objective battles where staying alive is only the first challenge you will face.

TrueCombat:Elite (TCE) is a modern world total conversion of the free, popular, stand-alone third-person shooter, Wolfenstein: Enemy Territory. That is, TCE is an entirely free game, made by gamers, for gamers. It is the 3rd major release in the TrueCombat mod series.

The TrueCombat game series has been around since 2000 and was a pioneer in introducing an iron sight aiming system (ISIS), thus removing the crosshair, among other things.

Now, the most important question: "What can I expect from TCE?"

TCE is a tactical-team shooter, set up in a modern-world environment. TCE puts you into the role of elite mercenary soldier in the conflicts of two internationally operating forces. The Global Intervention Force (GIF626 aka in-game as "Spec Ops") is a special force formed of the top of the world experts joining from US Delta force, UK SAS, German KSK and GSG9, to mention a few. An international mercenary organization known as "The Unit" (aka "Terror" in-game) is their opponent. It was reported that some members of the Unit were once with the Special Op forces, but the lure of money was strong.

You say to yourself, "Yet another terror counter-terrorism shooter. Why the hell should I try it? Been there, done that!"

We say: Because you don't have to spend a cent (it's totally free) and it features:

The Renegadist May 5, 2018 @ 10:24pm
Got a Discord server up for anyone interested in finding people to play with: https://discord.gg/fXAZd62

The Renegadist May 9, 2017 @ 7:12pm
If anyone still plays this feel free to add me so we can possibly get more people on. Also add me if you can start up and host a dericated server as I'm currently​ working on a TCE Discord server and it would be nice to have our own official host.

The Renegadist May 9, 2017 @ 2:36pm
Well, there's never anyone on except for my friend and myself so we never have to worry about cheating. It's also the server where I have the lowest latency so unless someone opens up a server close to me I'll be sticking to that one. I just wish there was a good bot server with a good ping and infinite amount​ turned off.

.burn FiekMa May 9, 2017 @ 7:47am
DAD's bf made this server and they are cheating together also more players cheat in this game... sadly