Greenlight > Games > Scott's Workshop
Greenlight is being retired. For more information on how to submit games to steam, refer to this blog post.
This item has been removed from the community because it violates Steam Community & Content Guidelines. It is only visible to you. If you believe your item has been removed by mistake, please contact Steam Support.
This item is incompatible with Greenlight. Please see the instructions page for reasons why this item might not work within Greenlight.
Current visibility: Hidden
This item will only be visible to you, admins, and anyone marked as a creator.
Current visibility: Friends-only
This item will only be visible in searches to you, your friends, and admins.
The Desolate Hope
Description Discussions8 Comments378 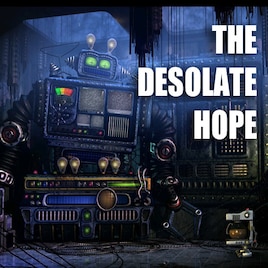 Scott
Offline
See all 64 collections (some may be hidden)

View The Desolate Hope in the store

Store page
Description
On a distant edge of an unknown planet, an abandoned structure sits in silence. Constructed by an unmanned research vessel sent from Earth, the Lun Infinus station was designed to run simulations for a five year period, exploring possibilities of human colonization in the case that Earth became uninhabitable. Developed during an age of ambition and wealth, the project was quickly abandoned when interest faded in the following years. The last transmission from Earth occurred more than thirty years ago.

The Lun Infinus station contained five sentient computers, Derelicts, built with certain levels of mobility in the case of emergency or need for relocation. Each of these Derelicts was to formulate their own plan for colonization based on thousands of hours of simulations. Given the amount of time that has passed however, the simulations have become very elaborate and bizarre.

Meanwhile however, a mysterious computer virus has emerged. The virus of unknown origins has been slowly ravaging the Derelicts. Because of this, more and more CPU processing power has been needed for anti-virus measures, leaving less power for the simulations.

Coffee is the last mobile resident of the station, a small service robot who spends his days keeping the station and the Derelicts operational as they perform their daily tasks. Since CPU power is slim, Coffee has been cutting corners to find ways around the virus. By using small subsystems and less vital CPU's scattered through the station in lesser devices, Coffee has designed a line of digital helpers, each simply called a D-Co, or "Digital Counterpart", to assist him in fighting the virus and keeping the station operational. Eventually the virus gets the best of each D-Co, and Coffee tries to create an improved D-Co using a different CPU. The latest is D-Co 9, built using the code of a simple computer game. Coffee dedicates his own CPU to be used for the main simulations, putting D-Co in charge of moving his body throughout the station, taking care of the needs of the Derelicts, and fighting off virus attacks when they occur.

GAMEPLAY:
The Desolate Hope mixes several gameplay styles. On the station and in the simulations, the game is a platformer. You will shoot enemies, collect powerups and bits (money) and upgrade yourself and your virtual battlers. When you enter a mini-simulation (the old arcade style screens) then the game becomes an overhead dungeon crawler similar to The Legend of Zelda. There you can farm money and gain options to customize your battle experiences. When you encounter a virus boss, the game shifts to a JRPG style battle where you must use the mouse to select from your various options to defeat your opponent. Almost everything outside of these battles is aimed at upgrading your abilities and increasing your stats for these fights, they are the real challenge of the game.

"The Desolate Hope, isn't great just because of its stunning artwork, its gripping sci-fi story, and its coffee pot protagonist. It also packs a triple punch with three distinct gameplay types, each skillfully woven together. The side scrolling action has different platforming elements for each section, the overhead adventure distills fun elements of a classic Zelda (including walls you can walk through or destroy) and the turn-based, RPG-style boss battles are visually mesmerizing and tough." -IndieGames.com

"From a gameplay point of view The Desolate Hope mixes platforming with overhead adventure segments and semi turn-based battles. This is already intriguing, but I'm more impressed by its stunning visual style." -mtv.com

"The Desolate Hope is developed by Scott Games and upon booting it up, you will notice the great artwork the game uses. It combines three gameplay genres, side scrolling, overhead adventure and a turn-based RPG styled battles. It might sound like a messy mash up but the game is able to pull it off without a hitch and gamers are in for a unique experience. Offering hours of gameplay, a unique leveling system and a day-and-night cycle." -TheBitBag.com

"The Desolate Hope constantly plays with the very idea of playing a video game. Unlike many modern games, it is hyper-aware of its gameness. There are games inside of games, simulations inside of simulations, mini-games inside of boss fights. And the fact that you’re playing as an AI that developed from a computer game is a very hard wink at the exhaustive level of metagaming that’s going on." -GamesThatExist.com

"There are plenty of hours of gameplay, a nonlinear path allowing for exploration, and detailed art design. Now you can't beat that..."
-GameSpot.com

"I very much enjoy a lot about this game; it’s takes on platforming, dungeon-crawling, and RPGs is unique and well mixed together so that one type of play benefits the other. It also has some incredible visuals, with very detailed character designs and a classic cyberpunk attitude, but not also without a bit of whimsy as well (one derelict has given up on his mission, becoming a toymaker and has begun recreating his simulation with child-like automatons)." -GamingSymmetry.com

"So after encountering this on Rock Paper Shotgun, I was ready to declare my indie game of the year. Because any game made rock solid out of derelict, insane robots just makes my not-so-inner geek squeal. How insane are the robots? Each is actively running a matrix like test bed, and.... Well, one was building a mining simulator, decided that was too depressing, and started making toys. Another is trying to capture the artistic essence of the soul, but cant seem to make anything run for more than five seconds. The next is attempting to rebuild humanity out of two tissue samples. Then there's the one still running straight, he seems curiously nice... And the last one's dead and frozen. But still drawing power...Then there's the coffee pot. Which is you. Sort of. And hey, bonus! You've got fifteen days to live, and you're the ninth attempt at straightening things out. Good luck!" -an enthusiastic fan
Popular Discussions View All (8)

THANK YO U SCOTT
Melo_H

The Desolate Hope has been Greenlit and is now listed in the Steam store. For the latest information, purchase options, and discussions for The Desolate Hope, please see it on the Steam Store or in the Steam Community.
Visit Store Page
For more details Visit Community Hub
For latest discussions
If you really, really want to, you can continue to the Greenlight page. Information on this page may be out of date, since all the action has moved to the areas noted above.