Store Page
Stellaris >  Workshop > silfae's Workshop
This item has been removed from the community because it violates Steam Community & Content Guidelines. It is only visible to you. If you believe your item has been removed by mistake, please contact Steam Support.
This item is incompatible with Stellaris. Please see the instructions page for reasons why this item might not work within Stellaris.
Current visibility: Hidden
This item will only be visible to you, admins, and anyone marked as a creator.
Current visibility: Friends-only
This item will only be visible in searches to you, your friends, and admins. 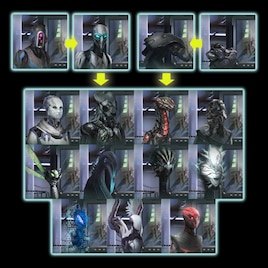 This item has been added to your Subscriptions. Some games will require you to relaunch them before the item will be downloaded.
In 1 collection by silfae
Silfae's Animated Portraits

SYNTHETIC DAWN PATCH:
-The mod now has two separate "species_classes" containing the same portraits: Bio-synthetics and Synthetics. The former is available to everybody, the latter only to users who own the Synthetic Dawn DLC. Choosing a portrait from the Bio-synthetics class allows you to create an Ascended Synthetic Empire (traits will be changed on gamestart as in the previous version), whereas choosing a portrait from the Synthetic class will allow you to pick the traits and government forms of the Synthetic Dawn DLC.

-Just like in the previous version, the player is prompted to choose which portrait to pick when undergoing Synthetic Ascension, with the difference that now you will be able to pick both from my portraits and the Synthetic Dawn ones (provided that you own the DLC).

-Modifications and templates on both droids and ascended organics are available just as in vanilla, but with the added portraits as available options to pick when creating or modifying new models.

Custom Empire 2
Synthetic Dawn users will now have a second Synthetic Empire available to choose as start, the Neo-Cortex Flagellators, a machine consciousness/assimilators. Set to spawn as AI sometimes.

Compatibility
This mod is NOT compatible with Animated Synthetic Portraits, you can be subscribed to both, but start your game with only ONE of them activated, or you will have graphical oddities.
On the other hand, this mod IS compatible with all my other mods, both Animated portraits and dimorphism ones.
I've tried to make this mod as compatible as possible, but I had to override a couple of vanilla files to make it work, so there are likely to be conflicts with any other mods that modify the following files:

If you're looking for a lighter version of this mod that does not affect any vanilla files, I suggest you to subscribe to my Animated Synthetic Portraits mod, which is a purely graphical tweak.

Patching
Sorry, while I will keep this mod updated for vanilla (as I do for all my mods), I'm prehemptively saying that I will not create patches to make it compatible with other popular mods (if it isn't compatible in the first place, which I do not know at the moment.)
I will say though that I've scripted this mod to set up a global flag (extended_synths_on) for any game started with it active, which should make it easier for other modders to easily write their code around it (creating "if" alternatives to take in consideration whether my mod is active or not) without the need to create alternative versions.

Mod of the Week