Greenlight > Games > Instant Kingdom's Workshop
Greenlight is being retired. For more information on how to submit games to steam, refer to this blog post.
This item has been removed from the community because it violates Steam Community & Content Guidelines. It is only visible to you. If you believe your item has been removed by mistake, please contact Steam Support.
This item is incompatible with Greenlight. Please see the instructions page for reasons why this item might not work within Greenlight.
Current visibility: Hidden
This item will only be visible to you, admins, and anyone marked as a creator.
Current visibility: Friends-only
This item will only be visible in searches to you, your friends, and admins.
Notrium
Description Discussions2 Comments106 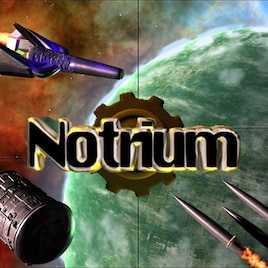 Instant Kingdom
Offline
See all 7 collections (some may be hidden)

View Notrium in the store

Store page
Description
Release date: 2003
You have crash-landed on planet Notrium. Your food supplies are running low, a pack of predatory aliens have got your scent. There are no more bullets for your pistol, your only weapon a handful of rocks. The night is coming, and you are desperately looking for wood to make a fire. Notrium is a game of survival.

Notrium is a realtime single player survival game on a strange planet filled with aliens (and depending on your choice, you might be one of those aliens). To survive you must find edible food, build up your base, create weapons and bullets, and fight all sorts of enemies ranging from robots to alien queens. You have a vast randomly generated planet to explore, and there are multiple paths to victory.

Right now, Notrium is open-source (as a version called OpenNotrium), and has been ported to work on other platforms, including Linux. Here's OpenNotrium on GitHub [github.com]!

ClosetGoblin Oct 21, 2014 @ 9:33pm
I love this game so much, and still to this day pick it up every now and again. I think that an updated and polished version would be amazing and probably decently successful. It's got my vote!

sladki greh Aug 5, 2014 @ 2:45pm
Awesome, been looking for it for almost a year now. Until I asked my brother and explained the game to him and he just said: "Notrium?" I immediately came to Steam to buy it if it's available and then I saw it's here.

Notrium has been Greenlit and is now listed in the Steam store. For the latest information, purchase options, and discussions for Notrium, please see it on the Steam Store or in the Steam Community.
Visit Store Page
For more details Visit Community Hub
For latest discussions
If you really, really want to, you can continue to the Greenlight page. Information on this page may be out of date, since all the action has moved to the areas noted above.