Greenlight > Games > 9heads's Workshop
Greenlight is being retired. For more information on how to submit games to steam, refer to this blog post.
This item has been removed from the community because it violates Steam Community & Content Guidelines. It is only visible to you. If you believe your item has been removed by mistake, please contact Steam Support.
This item is incompatible with Greenlight. Please see the instructions page for reasons why this item might not work within Greenlight.
Current visibility: Hidden
This item will only be visible to you, admins, and anyone marked as a creator.
Current visibility: Friends-only
This item will only be visible in searches to you, your friends, and admins.
Vitrum
Description Discussions2 Announcements2 Comments178 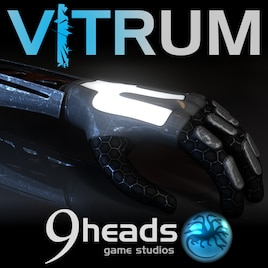 9heads
Offline
See all 44 collections (some may be hidden)

View Vitrum in the store

It's a free update for Vitrum, and it allows you to create/edit/share your own Vitrum stages, you can also play and rate others'.
Let's see who will design the most awesome stage!

We are here to announce that we are working on the Stage Editor for Vitrum, soon we'll release it!

You'll be able to fully design and create your own stages, upload them to our servers and share them with the entire Vitrum community.

Also, you'll be able to download shared stages, play them and rate them!

Let's see who will create the most awesome Vitrum stage ever!

The main character is an android designed to convert energy from crystals into powers. The android can absorb energy in each of his hands, allowing him to combine different powers. One of the coolest powers is the ability to invert the gravity, because it's 3d and because the player can freely choose when and where to use it!

Vitrum takes place in a desert laboratory full of different colored crystals. Some crystals grant powers, others are harmful to the android.

The player will have to figure out how to use the crystals, solve the puzzles and finish each stage in Vitrum.

Vitrum has been Greenlit and is now listed in the Steam store. For the latest information, purchase options, and discussions for Vitrum, please see it on the Steam Store or in the Steam Community.
Visit Store Page
For more details Visit Community Hub
For latest discussions
If you really, really want to, you can continue to the Greenlight page. Information on this page may be out of date, since all the action has moved to the areas noted above.