Crusader Kings II>  Workshop > Dragatus's Workshop
This item has been removed from the community because it violates Steam Community & Content Guidelines. It is only visible to you. If you believe your item has been removed by mistake, please contact Steam Support.
This item is incompatible with Crusader Kings II. Please see the instructions page for reasons why this item might not work within Crusader Kings II.
Current visibility: Hidden
This item will only be visible to you, admins, and anyone marked as a creator.
Current visibility: Friends-only
This item will only be visible in searches to you, your friends, and admins. 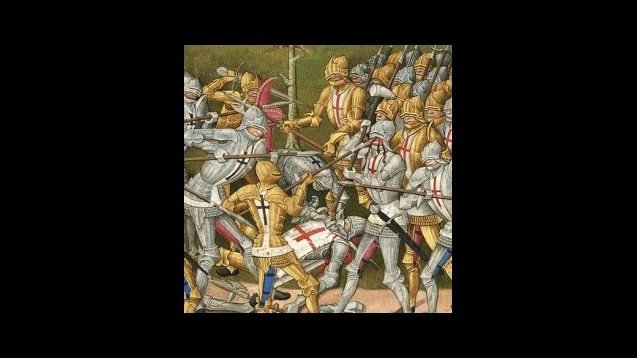 Dragatus
Offline
See all 97 collections (some may be hidden)

This item has been added to your Subscriptions. Some games will require you to relaunch them before the item will be downloaded.
Description
INTRODUCTION

The combat system in Crusader Kings 2 is quite complex with unit types, flanks, combat phases, tactics, terrain, and commander's traits all playing into how a battle unfolds. However, all this complexity fails to produce much actual depth and most of the time it just boils down to who has the bigger army.

Even worse is that it encourages monotype armies composed out of a single type of military unit and putting all your retinues on one flank in order not to 'pollute' their tactic selection, though with the last patches we've seen some attempts to punish this behaviour. This also creates an imbalance between the various cultures because some unit types and retinues are much better than others.

The objective of this mod is not to add depth to the tactical aspect of battles. Instead the mod only aims to get rid of all the useless complexity, to balance the units & retinues, and to no longer punish the player for mixing retinues with levies. That said, it does still manage to add some depth on the strategic level by making you choose between retinues that are good at castle assaults and retinues that are good at pursuit.

1. This is a gameplay altering mod so it disables achievements.
2. The mod is compatible with CK2 Plus v4.07 and HIP, but it is not compatible with AGoT.
3. It may or may not be compatible with other overhauls mods, depending on whether or not those mods introduce new unit types or do something special with the combat tactics (AGoT uses them for simulating dragons).
4. CK2 Plus will also give you a message about wrong checksum if you use a third mod alongside it and Elegant Warfare.

2. Battles no longer have a skirmish and a melee phase. It all happens in one single phase (the old skirmish phase, but with melee phase icons). Melee stats are now used to describe a unit's ability to assault besieged holdings.

3. All units have been rebalanced using a simple trade-off between cost and power, with some being more useful in pursuit (most cavalry), others better at assaults (most infantry), a few specialize in battle (Pikemen, War Elephants), and a few are somewhere inbetween (Heavy Cavalry, Camel Cavalry). All units are now also roughly 33% more expensive than in the unmodded game.

4. Added two new retinues available only to emperor tier characters. Imperial Bodyguard retinue is composed out of 500 Heavy Cavalry with an innate +40% morale bonus and is available to all emperors who do not have their capital in India. Those emperor that do have their capital in India can instead recruit the Imperial Elephant retinue which consists out of 100 War Elephants and 400 Heavy Infantry (both with a +40% morale bonus). The two retinues are about equally strong in battle and the main difference is style. Their purpose is to balance the various cultures at the highest tier. You still need the Legacy of Rome DLC to benefit from these retinues.

The first change has two major consequences. You can now freely mix your retinues with your other troops, which reduces the amount of hassle and makes using them to simply beef up your levy with some extra troops a viable approach. The other consequence is that pure retinue armies (and nomad hordes) are significantly weaker than before.

In short, retinues are no longer super-soldiers that need special management. They're just extra troops beyond what you'd get from your levy, with the added benefit that they don't block you from declaring wars.

The second and third change are strongly related. The impact of unit stats is now less tactical and more strategic. The question is less how do you win a battle and more what happens after a battle. A cavalry army will be good at securing the victory by killing more of the enemy during pursuit as well as reducing the impact of a lost battle by taking fewer casualties. An army of Archers and Heavy Infantry on the other hand will be better able to utilize the break after the battle to quickly take a holding. Finally an army of Pikemen won't be good at either of those two things, but has instead an increased battle value. Light Infantry are bad at all those tasks but plentiful so they excel at sieges and raiding.

Unit's attack and defense values in all combat phases are the same, so the appendix only lists one value. The first number is battle, the second is assault, and the final one is pursuit. the number in the brackets after the name of the unit is it's cost. All units have a morale value of 2.

Units have 4 morale, making battles longer and more decisive than in v1.2, while cavalry is less impactful. Variant 1.1b has checksum support for CK2+ 4.06 and 4.07.

The original version of the mod with stronger Archers and Pikemen and weaker Light Cavalry and Camel Cavalry (3 point cost for all). In this version the chance to get tactics is not affected by Martial skill and tactics are called "Luck". Otherwise it's the same as the updated version 1.1.
< >
101 Comments

Dragatus  [author] Nov 4, 2021 @ 12:57pm
You'll need to delete some files from your HIP installation. Go to mod\Historical_Immersion_Project\common\combat_tactics and delete all the files in that folder. If that's too advanced for you then I'm sorry, but there is no simpler method.

pic_pic_magik Nov 3, 2021 @ 2:23pm
Hi
I'm really interested in playing with your mod, but how do I make it HIP compatible ?
( please no complex code manipulations, I'm a 65-year old computer Neanderthal)

Dragatus  [author] May 24, 2021 @ 11:31am
No, there is no simple way to port the mod to CK3 because of how much the combat changed. And I haven't played enough CK3 to have very strong opinions about its combat mechanics.

Dragatus  [author] May 23, 2021 @ 12:07pm
If it's your first playthrough you don't really need this mod yet, you have enough other things to worry about and it won't add that much to your game. My mod only really becomes valuable once you start getting more into the details of how combat works.

kevin_greenleaf May 22, 2021 @ 4:48pm
Why only a skirmish phase? I'm not sure I want to use this mod, it seems like it changes too much. I am still on my first playthrough

Bobby G Mar 26, 2021 @ 8:19pm
I have to say, I play all my saves with this mod, especially the old version, I really like the feeling of taking the army into combat and having the uncertainty that I will win or lose, it is always a clock counting towards the end of every battle.