Greenlight > Games > Elhoim's Workshop
Greenlight is being retired. For more information on how to submit games to steam, refer to this blog post.
This item has been removed from the community because it violates Steam Community & Content Guidelines. It is only visible to you. If you believe your item has been removed by mistake, please contact Steam Support.
This item is incompatible with Greenlight. Please see the instructions page for reasons why this item might not work within Greenlight.
Current visibility: Hidden
This item will only be visible to you, admins, and anyone marked as a creator.
Current visibility: Friends-only
This item will only be visible in searches to you, your friends, and admins.
The Age of Decadence
Description Discussions10 Announcements6 Comments1033 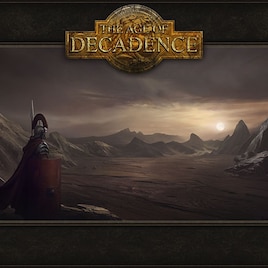 Dark Lighter
Offline
See all 173 collections (some may be hidden)

View The Age of Decadence in the store

We’re proud to offer you the first two chapters (roughly 60% of the game) and send you on an exciting (hopefully) and one of a kind adventure.

The first two chapters have all the features of the full game and give you:

- 10 locations: two towns where all the scheming, plotting, and back-stabbing take place, raiders’ camps, an ancient tomb, a tower of the Magi in a ruined city, the Abyss, which claimed many lives, a mountain pass protecting the southern towns from the barbarians of the wastes, and more.
- Over 100 hand-crafted fights (no filler combat), 130 if you count all variations
- Over 70 quests with multiple solutions, choices, and consequences
- over 100 characters you can talk to
- Over 350,000 words of dialogue (that would be a 1,300-page book)
- 6 mutually-exclusive questlines
- 40 different weapons, 15 different armor sets, dozens of other items (alchemical reagents, crafting components, artefacts, scrolls, throwing nets, etc)
- A lot of death screens

It’s a challenging (no, really), turn-based game with a lot of text. Its design is influenced by RPGs your grandpa used to play, where dying a lot was half the fun and the only way to learn. If you aren’t sure if this game is for you, try the demo first.

Keep in mind that even though the content is done, we’re committed to quality and will continue improving balance, optimization, and quests (based on your feedback).

We need 4-5 months to finish the third and final chapter of the game (we’re planning to start the beta test in April 2014) and your support and suggestions will help us deliver a quality RPG. Should you have any questions or suggestions, please visit our forums at http://www.irontowerstudio.com/forum

News from the front:

- The testing goes well and so far we’re on schedule for the mid-October release. Naturally, there’s still work to be done and issues to resolve, but all the major problems have been fixed. Still, we want to be sure, so if you want to lend to hand and test the upcoming release, please report to the nearest recruiting station.

- At the moment, we’re working on ‘Teron to Maadoran’ transition issues at the moment, fixing issues created by the switch to 1-10 system, and finishing up the pass and the tower.

- Oscar’s also tweaking the fight with the Ordu at the pass, adding various states and variables. Maybe you weakened the Ordu, maybe you just pissed them off and they came in great numbers, huffing and puffing. Maybe you managed to boost the defenses, skills, and equipment of the defenders. And finally, if you go for the Ordu’s leaders and manage to kill them first, their men will be demoralized and suffer combat penalties. Of course, fighting the leaders when they are surrounded by their men is a risky business – they pack quite a punch and are surrounded by their men. Shaping up like a fun fight.

- I added two gangs to the Slums, another character to the pass, "expanded" a couple of characters, wrote faction and personal endings, and now I'm working on death descriptions to commemorate your failures.

So, we're doing our very best to deliver quality RPG entertainment in the very near future and your continuous support is much appreciated.

You can check some new screens at our forums:

GameBanshee: Ultimately, the demo of Age of Decadence has, more than any game in a long while, left my jaw firmly planted on the floor. As an RPG player who loves deep character systems, game worlds with rich lore, nebulous and amoral situations, deep reactivity and interesting quest design, The Age of Decadence doesn't just meet the bar, it leaves some of the best and classic CRPGs in the dust. And as much as I can complain and nit-pick about what the game does or doesn't do, I find myself constantly coming back to it, just to try the same scenarios again as a different character, or to see if I can win a challenging fight, and ten times through, I'm still finding new locations, events and characters - that's the sign of a great RPG to me.

Vince  [author] Nov 14, 2013 @ 12:05pm
You can pre-order and gain access to the latest build (uploaded last night) right away. Alternatively, you can wait for the Steam version (same build). Either way, you'll get a steam key after the game is available on Steam.

WhItE PaNtHeR Nov 14, 2013 @ 9:23am
*We released the 'early access' demo to those who have pre-ordered 2 days ago. We fixed a few issues and will submit a new build to Valve on Monday.*

I guess if I pre-order the game on your site right now, I wont be able to play the early access and I have to wait till Valve makes it available on steam?
< >

The Age of Decadence has been Greenlit and is now listed in the Steam store. For the latest information, purchase options, and discussions for The Age of Decadence, please see it on the Steam Store or in the Steam Community.
Visit Store Page
For more details Visit Community Hub
For latest discussions
If you really, really want to, you can continue to the Greenlight page. Information on this page may be out of date, since all the action has moved to the areas noted above.