Greenlight > Games > Walk Thru Walls Studios's Workshop
Greenlight is being retired. For more information on how to submit games to steam, refer to this blog post.
This item has been removed from the community because it violates Steam Community & Content Guidelines. It is only visible to you. If you believe your item has been removed by mistake, please contact Steam Support.
This item is incompatible with Greenlight. Please see the instructions page for reasons why this item might not work within Greenlight.
Current visibility: Hidden
This item will only be visible to you, admins, and anyone marked as a creator.
Current visibility: Friends-only
This item will only be visible in searches to you, your friends, and admins.
Metal Dead
Description Discussions2 Announcements5 Comments202 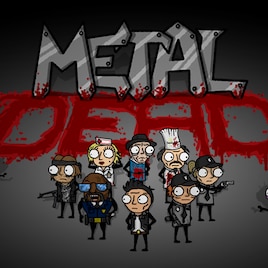 View Metal Dead in the store

First of all - a BIG thank you to all of our Greenlight supporters for helping us get to this point!

Metal Dead is now available on Steam - it's been a long, zombie-strewn road, but it's finally here, and just in time for Halloween.

For the first 6 days, 6 hours, and 6 minutes of release, Metal Dead will be discounted by 66% of its already insanely low price tag, so grab it quick!

The original heavy metal zombie adventure is finally coming to Steam... just in time for Halloween! Help Ronnie and Malcolm escape from the horde, now with full Steam integration - including achievements and trading cards.

Metal Dead will be available for you to devour on October 3rd, 2014. Thanks to all of you for your support, we wouldn't have been able to get to this point without you!

Its sequel Metal Dead: Encore is still in the works and is now headed for a 2015 release date on Steam.

Read More
Description
Release date: December 2011
The sequel Metal Dead: Encore is now on Steam Greenlight too! Get over there and help us out!
http://steamcommunity.com/sharedfiles/filedetails/?id=160642305

This twisted tale centers on two metal-heads in the midst of a zombie invasion. After crashing their car in front of a medical research facility, they become trapped and are forced to use their wits to puzzle their way to freedom. Along the way, they must deal with a cast of characters who range from mildly deranged to completely insane.

Rock, Paper, Shotgun
'I’d be more than willing to say this beats out early LucasArts efforts in pure laughs-per-minute.'

Alternative Magazine Online
'Walk Thru Walls Studios have launched with an inspired debut effort... Stuffing a zombie head down your pants has never been so much fun!' - 8.5/10

Adventure Gamers
'This first outing by two-man developer Walk Thru Walls floored me pretty much across the board with its humorous, gory, zombie-filled romp.' - 4/5

The Reticule
'Admittedly, the zombie genre is getting a little long in the tooth, but Metal Dead approaches the apocalyptic with a fresh style and comic humour throughout.' - 4/5 (Head Shot)

The Indie Shelter
'Recommended for adventure lovers as much for those who want to take their first steps into the genre.' - 8/10

Gnome's Lair
'Metal Dead is, you see, the closest we've come to the brilliance of Maniac Mansion since, well Maniac Mansion. It's the Shaun of the Dead of adventure gaming.'

When should this game be out?
Yuuki

[KOR] Polarbear Oct 26, 2014 @ 8:19am
Anybody purchased from Humble Bundle can get steam key? I bought it from H.B long time ago but it didn't provide steam key..

Tapewormz Sep 17, 2014 @ 8:00pm
I purchased Metal Dead through a bundle. Will I be able to activate it on Steam for easy management?

Catmancer Aug 22, 2014 @ 8:12pm
Is there a way I can contact you? I lost my copy of Metal Dead that I bought from Indievania and I'm hoping you can help. I had sent an email about it last week, but I haven't heard anything.

Metal Dead has been Greenlit and is now listed in the Steam store. For the latest information, purchase options, and discussions for Metal Dead, please see it on the Steam Store or in the Steam Community.
Visit Store Page
For more details Visit Community Hub
For latest discussions
If you really, really want to, you can continue to the Greenlight page. Information on this page may be out of date, since all the action has moved to the areas noted above.