Greenlight > Games > Reto-Moto's Workshop
Greenlight is being retired. For more information on how to submit games to steam, refer to this blog post.
This item has been removed from the community because it violates Steam Community & Content Guidelines. It is only visible to you. If you believe your item has been removed by mistake, please contact Steam Support.
This item is incompatible with Greenlight. Please see the instructions page for reasons why this item might not work within Greenlight.
Current visibility: Hidden
This item will only be visible to you, admins, and anyone marked as a creator.
Current visibility: Friends-only
This item will only be visible in searches to you, your friends, and admins.
Heroes & Generals
Description Discussions75 Announcements5 Comments4590 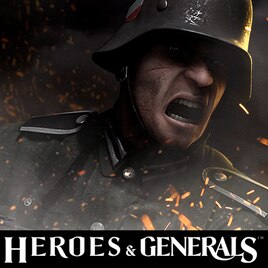 Reto.KenSolo
Offline
See all 433 collections (some may be hidden)

View Heroes & Generals in the store

The new build ‘Patton’ is online with a lot of exciting new stuff! This new update includes Russian weapons, weapon personalization, captured weapons, spotting 2.0, and more. We’re currently releasing new updates for the game more frequently than previously, so we’ve made a new videolog that summarizes some of the features introduced in the latest two updates :-)

Take a look here:
https://www.youtube.com/watch?v=nEJ5rJDrZZ8
Here is a quick rundown of the video’s content:

With the map of Europe being constantly redrawn by shifting frontlines and alliances, Russian weapons have begun making their appearance in the West. Whether captured from weapons depots or traded by the Soviets in exchange for foreign aid, they are now available for the troops in both factions.

The Russian weapons now available are:
Opposing Faction Weapons
But that is not all – both the US and the German faction now have access to a few captured weapons from the opposing faction. This means that the German players can buy some of the US weapons and vice versa.

These weapon categories are: 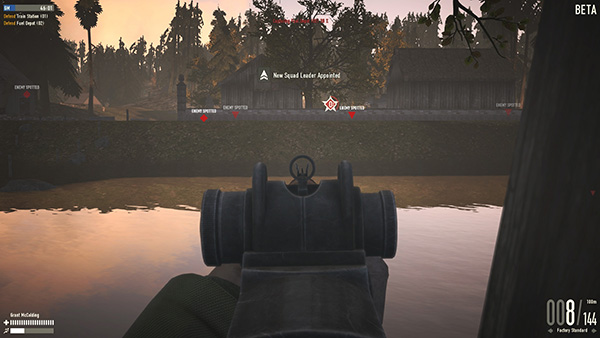 The spotting system has gone through a couple of changes in the last couple of updates, with the help and feedback from the community.

The new spotting system includes limited view distance for spot notifications, different icons for spotted infantry and vehicles and when you’re inside a tank or a plane you can only see other spotted vehicles – not spotted infantry. 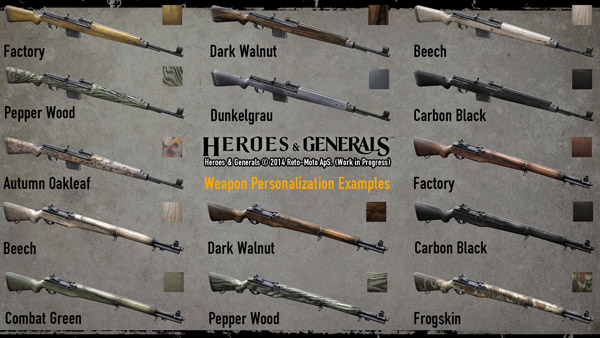 We have also introduced Weapon Personalization, where you can have different variations of wood, camouflage-patterns and coloring for your weapons.

Right now you can buy variations for the M1 Garand and the Gewehr 43, and in coming updates we’ll support personalization for the rest of the weapons, as well as add more variation options for each weapon.

We hope you will all help us welcome new players and community members to the game.
Read More
Patton update - The largest expansion to date
May 8, 2014 - Reto-Moto 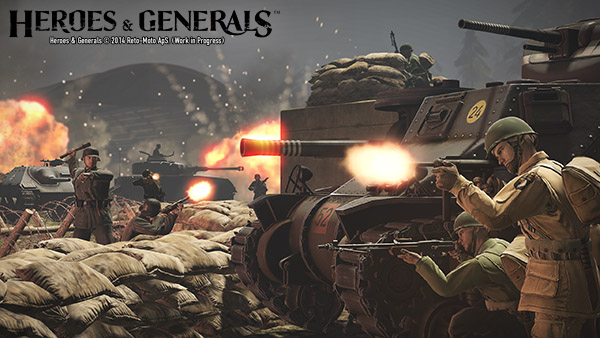 We have just released the largest and most ambitious update for Heroes & Generals since we went into open beta last year.

But that is not all - characters can now own and upgrade the vehicles, creating personal vehicle loadouts in a similar way to how weapon loadouts works.

"9 New Goddamned Tanks!" Trailer
We have made a special trailer to highlight the awesome new tanks as well as a brief look at the new personal vehicle loadout feature. We also plan to make a Patton videolog, as we usually do for a new release, but until then, watch this trailer, show it to your friends and help us spread the word!
So go watch the Patton update "9 New Goddamned Tanks!" trailer now:

Access to more vehicles, weapons and combat badges is unlocked when your characters rise in rank or gain ribbons based on your actions in the game, but if you wish to speed up the process, you may now purchase Ribbon Boosters to progress and unlock equipment, vehicles and combat badges faster.

... and there is much, much more to this update.

Even more toys coming up
In the coming weeks we will release even more content, so jump into action and watch out for more updates.
Read More
Description
Release date: Currently in Open Beta
Heroes & Generals is a Free2Play Massive Online FPS with a Strategic Multiplayer Campaign, set in the midst of World War II Europe, where Axis and Allies fight for control.

The game uniquely merges epic first-person shooter action with a rich strategic layer, where your decisions have the power to turn the tide in an ongoing war among thousands of online players.

Players can choose to play as 'Heroes', fighting in the trenches, flying planes, commanding tanks and other vehicles on the battlefield, or take control of the war as 'Generals', determining the strategic direction and supporting fellow players by managing battlefield assets, army units and reinforcements.

Tear up the WWII frontlines, manage resources and engage thousands of online players in a persistent war campaign built for shooter and strategy fans.

The war is fought out continuously across Windows, iOS and Android devices with thousands of players, and the result of every clash and battle alters the scope of the ongoing war campaign and might affect the final outcome.

The Action Game
The core of the game is a team-based first-person shooter. The players can engage in combat using a variety of characters, customizable weapons and vehicles such as tanks, fighter planes and even bikes.

The Strategic Layer
The action-game extends into a strategic top layer that binds the individual FPS sessions into a larger war with thousands of other players. On the strategic level players are able to command other players or entire groups in Assault Teams into combat. On top of that the strategic players have to manage resources and reinforcements in order to secure key locations on the battle map.

The Campaign
Each part of the game can be played separately and are designed to be enjoyable for everyone no matter how deeply they wish to be involved in the war. Heroes & Generals unique combination of FPS and Strategy gameplay allows players to participate in the grand online war at hugely different levels. Once-a-week FPS gamers can play alongside hardcore 10-hours-aday master strategists, and all players play their role in the grand war.

A Team of Hitman Veterans
Reto-Moto was founded in 1997 and quickly transformed into IO Interactive, which went on to release Hitman and Freedom Fighters. In 2004 IO Interactive was sold to Eidos, however the founding members of Reto-Moto left Eidos and reformed their old company, bringing in some of the core developers from IO Interactive to work on Heroes & Generals.

How much is cool this game?
Wake.

How many players are currently playing this game?
kestmobthe

Phoenix Amaku Mar 9, 2017 @ 3:15pm
This was the main reason i left, no viechele Class to pic with your infantry. Now I look back at ever since the beta and now! DAMN TIME TO SEND THOSE GERMANS BACK WHENCE THEY CAME!

Massive Titties Jul 14, 2016 @ 1:29pm
oh wow, its funny stumbling upon this in the greenlight and released section. It is interesting to see what the old war map looked like, back when it was first being released. Funny thing is, the game is still in alpha to this day, but its a good alpha and i think reto only keep it in alpha so they can continue to tweek stuff here and there and still have the reason of saying "its still in alpha". Very Good game over all, but hit detection sometimes is very slightly off and a couple of issues with the squad 2.0 update, but still darn good over all.

Heroes & Generals has been Greenlit and is now listed in the Steam store. For the latest information, purchase options, and discussions for Heroes & Generals, please see it on the Steam Store or in the Steam Community.
Visit Store Page
For more details Visit Community Hub
For latest discussions
If you really, really want to, you can continue to the Greenlight page. Information on this page may be out of date, since all the action has moved to the areas noted above.