Greenlight > Games > Instant Kingdom's Workshop
Greenlight is being retired. For more information on how to submit games to steam, refer to this blog post.
This item has been removed from the community because it violates Steam Community & Content Guidelines. It is only visible to you. If you believe your item has been removed by mistake, please contact Steam Support.
This item is incompatible with Greenlight. Please see the instructions page for reasons why this item might not work within Greenlight.
Current visibility: Hidden
This item will only be visible to you, admins, and anyone marked as a creator.
Current visibility: Friends-only
This item will only be visible in searches to you, your friends, and admins.
Driftmoon
Description Discussions7 Announcements5 Comments396 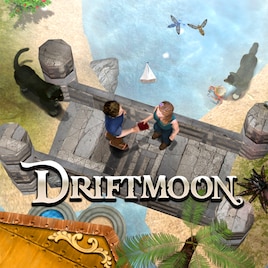 Instant Kingdom
Offline
See all 78 collections (some may be hidden)

View Driftmoon in the store

News! Driftmoon is coming to an Android/iOS/Linux/OSX/PC device near you soon(ish)! Since nearly everybody we've met has told us that Driftmoon would be so nice to play on a tablet, we've finally decided to port the game, and see whether nearly everybody is right.

I looked at different options for a few weeks. I considered porting my 100 000 lines of C++ code to all the platforms, but since Driftmoon was made using Directx, it would also have required me to change all of the graphics side. Android doesn't support a completely C++ program, you actually need a lot of Java code to go along with it. In the end I got scared, each of the four additional platforms I was looking at required significant changes to the code, and C++ is notoriously difficult for tracking the thousands of errors that were bound to creep in when doing a major port.

In the end I decided it made more sense to port the game just once, and click a button to get it on all of the different platforms I want to. With Unity I'm using a language called C#, which is a close relative to C++, with subtle differences. I started the porting in April, and for the first three months I couldn't see anything of the game, because large chunks of the game didn't work yet. Not being able to run the game for months is to me the most dreadful phase of a porting process like this, you won't know whether the 50 000 lines of code you just made actually works (unless of course you spend weeks developing some stand-in code for the parts you haven't ported yet).

What does this mean for mods? I'm planning on keeping full mod support for all platforms. Some current mods will require slight changes to get working with the new version. We're switching from 2D physics to fully 3D physics, and because of that there will be some differences - mainly these have to do with giving height to invisible barriers and adjusting physics puzzles. I will tell you more when I have the complete list, and I will be helping with the changes if anyone needs it.

When will you get to play? I really can't give a release date yet, but I will keep you posted on where we are at the moment. We have the desktop versions going pretty nicely, still need to iron out some strange bugs like missing people, and doors opening the wrong way, but those are not far away from being completed, and we'll soon need people to test them. The mobile device portion will require a bit more work, because it needs plenty of performance optimization, and user interface changes to accommodate the smaller screens and playing with a finger. I'm very excited about playing Driftmoon on a tablet, I'm certain Driftmoon will be one of the better RPG's out there for these devices.

Many have been asking how well Driftmoon has done financially. Well, Driftmoon has done spectacularly well, at least according to our own standards. Not enough to make us millionaires (we weren't aiming for that anyway) - but well enough to keep making more games a real possibility for our family. I will be checking our agreements with our distributors on whether or not I can reveal any figures, with any luck I might be able to tell you some specifics later on.

But what's really made our day (well, our year) has been all the wonderful feedback we've received from real flesh-and-blood people around the world. It's felt awesome to time and time again read how our little game's managed to be the biggest gaming surprise ever (hopefully they mean it in a good way), provide an unforgettable adventure, or leave someone grinning from ear to ear. Thanks everyone!

Driftmoon, our "absolutely brilliant" (as some have called it) adventure role-playing game, is now officially released after only seven years of development time. Seriously, I'm not kidding you, it's complete now! First of all, a heartfelt thank you to all of our pre-orderers and supporters, we wouldn't be here without you!

Such a grand occasion calls for some celebration, so ta-daa: Up until the 5th of March,
Driftmoon goes for just 11.99€![www.instantkingdom.com]

The Story
The last hope of an enchanted world lies in an unlikely alliance: a hyperactive firefly, a queen panther with a whale-sized ego, and a fellow who's lost all but his bones. They'll take you on a journey like no other, full of amazing adventures, smiles and surprises, fantastic discoveries, wonderful stories, and fearsome foes!

We're always keen on hearing from our players, so if you run into any problems, or think of something you want to share with us, please press the letter "F" while playing, and you can send feedback directly to us.

Both Driftmoon and its free demo are available directly through our website http://www.instantkingdom.com/, as well as a range of digital distribution platforms, including GOG.com, Desura, GamersGate, and Green Man Gaming.


And Remember Gareth Meek, our awesome composer? Head on over to Bandcamp[garethmeekcompositions.bandcamp.com], and get that Driftmoon soundtrack you've been dreaming of!

-"Driftmoon reminds of so much of what I loved about games when I was younger. The adventure, the story, the fun. It’s pure entertainment and a joy to play through." (9/10) (i-luv-games.com)

-"...it's been a long time since I enjoyed a game as much as this one. Think Quest for Glory and Frayed Knights mixed and blended together and you'll have some idea of what to expect." (4/5)
(rpgwatch.com)

-"Driftmoon works so well because all the elements blend together like a good stew where each ingredient is cooked perfectly and there's more depth to be found as you reach the bottom of the bowl." (95%) (fanboydestroy.com)

-"Everyone who likes classic role-playing games, must play Driftmoon. A wonderful rpg with many great Features and a fantastic world. Buy it!" Translation from German provided by reviewer.
(zockah.de)

-"...a delightful touch of whimsey and there's plenty of humour to be found here. How many other games would have the deadly Hoe of Doom as an early weapon? Or such wonderfully ordinary conversations with undead skeletons?" (96%) (Bytten.com)

We've been awed at how much enthusiastic feedback we've received from both players and reviewers!
Thank you everyone, and have fun playing!
Anne and Ville

Ps. If you want to make sure you won't miss our next game (which hopefully won't take seven years to appear), make sure to get our Newsletter[www.instantkingdom.com]

Ps2. If you like Driftmoon, and feel like you'd like to do something to help, we're always tremendously grateful for all help in spreading the word about Driftmoon! So do tell your friends, forum pals, Steam buddies, that grandma you think could really use more excitement in her life. Everything goes!

Here's also a link to a new Facebook Fan page [www.facebook.com] for Driftmoon, which Morgan just opened up for us. Thanks Morgan! Little thing like that mean a lot to us!

The beautiful, enchanted world of Driftmoon trembles in the shadow of a forgotten evil, for the dark King Ixal is again gathering his forces.

Hope lies in an unlikely alliance: A young man joins forces with a little firefly dreaming of stardom, a panther queen with the ego of a moon whale, and a very determined fellow who's lost everything but his bones, and still hasn't given up. Knowing nothing of the amazing adventures and the fearsome foes that await them, the party embarks on a journey like no other.

Features
Driftmoon has originated from the minds and hearts of Ville and Anne Mönkkönen. We owe thanks to many of our players for the helpful feedback they've given us! The music in Driftmoon has been composed by Gareth Meek, and the soundtrack is also available {LINK REMOVED}(http://garethmeekcompositions.bandcamp.com/album/driftmoon-the-soundtrack). Most of the character portraits in the game are by our friend {LINK REMOVED}Johanna Sundström {LINK REMOVED}(http://jojoani.carbonmade.com/).

Note from developer: Thank you for all the great comments (and the votes!) so far! We're especially happy to hear you've enjoyed the demo so much, and that some of you have gone through the trouble of adding Driftmoon to their collection and/or feed. Those are big things to a tiny company like ours. Thanks guys! :)
< >
396 Comments

Instant Kingdom  [author] Jan 3, 2014 @ 11:36am
Driftmoon has now been officially released on Steam! Yay! A thousand thanks, everyone!

Instant Kingdom  [author] Dec 21, 2013 @ 11:30am
Hello @ Nomine @cards and everyone else! Driftmoon will be available on Steam as soon as possible. It depends on Steam's schedules, and we haven't been given the right to reveal the exact date... I suppose I could say that it'll be at least about two weeks from now.
We're happy to hear you're excited to get playing Driftmoon through Steam! :)

Driftmoon has been Greenlit and is now listed in the Steam store. For the latest information, purchase options, and discussions for Driftmoon, please see it on the Steam Store or in the Steam Community.
Visit Store Page
For more details Visit Community Hub
For latest discussions
If you really, really want to, you can continue to the Greenlight page. Information on this page may be out of date, since all the action has moved to the areas noted above.