Greenlight > Games > luvcraft's Workshop
Greenlight is being retired. For more information on how to submit games to steam, refer to this blog post.
This item has been removed from the community because it violates Steam Community & Content Guidelines. It is only visible to you. If you believe your item has been removed by mistake, please contact Steam Support.
This item is incompatible with Greenlight. Please see the instructions page for reasons why this item might not work within Greenlight.
Current visibility: Hidden
This item will only be visible to you, admins, and anyone marked as a creator.
Current visibility: Friends-only
This item will only be visible in searches to you, your friends, and admins.
Crosstown
Description Discussions1 Announcements1 Comments83 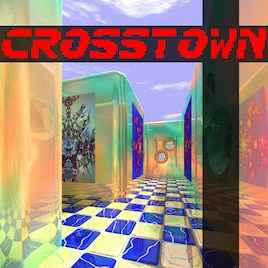 luvcraft
Online
See all 12 collections (some may be hidden)
Recent Announcements View All (1)
Awesome review from CGR Undertow!
January 12, 2013 - luvcraft

The Xbox 360 version of Crosstown has received a great video review from CGR Undertow! Thanks, CGR!

Read More
Description
Crosstown is the best classic computer game that never was! Inspired by Steve Harter's C64 cult classic "Crossroads", Crosstown drops players into a strange and dangerous world with no memories and no identity; just a unisex toga and a gun. Collect qreds to progress while shooting or avoiding the monsters in the mazes, and spend time between levels getting to know PIGGY, the enigmatic and probably-insane banking computer that seems to run the place.

Up to four players can play simultaneously via local multiplayer, and can switch between co-op and competitive at a whim -- depending entirely on how magnanimous or sadistic they're feeling.

If you can make it through all 40 of story mode's hectic levels, then an ending awaits you that is so mind blowing that you will never again be impressed by the mind-blowing artsy ending of any other indie game for as long as you live. PIGGY guarantees it.

"Crosstown combines the fugly, monocolored graphics of early home computers, the 'chess pieces gone mad' gameplay of early arcade hits like Robotron: 2084, and the sheer mindf*ckery of Portal for an experience that's well worth the dollar you'll pay, along with any hair you'll tear out while trying to finish it." -- Gameroom Blitz

"one of the better, and certainly one of the most reasonably priced, titles on the Xbox Live Indie Games service" -- 1up

"Crosstown is a bit like a very frantic firework display ... this faux-8-bit maze adventure is well worth a try." -- Negative Gamer

"incredibly addicting [and] hilarious... wrapped inside a coating of nostalgia" -- GayGamer

"crosstown is noisy, bright, chaotic, and costs one dollar... crosstown is worth discovering. i like when games give more thought to the purpose of death than “the player has to try again.” i especially like a shooting game, which are becoming more and more impossible-to-play hard, that every player is guaranteed to see the end of." -- Anna Anthropy

"I wholeheartedly endorse Crosstown. It looks old school but at its heart is an awesome action game... It’s one of those titles where a simple design can lead to complex game play." -- Indie Gamer Chick

Crosstown is available now for the Xbox 360 via XBLIG, and with your help it will soon be available for PC and Mac via Steam, as well!

Boogadrew Sep 19, 2014 @ 4:06pm
Loved this game on Xbox! It's a little arcade ecosystem of destruction for up to four players. Seriously, you want to play this.