Greenlight > Games > syn9's Workshop
Greenlight is being retired. For more information on how to submit games to steam, refer to this blog post.
This item has been removed from the community because it violates Steam Community & Content Guidelines. It is only visible to you. If you believe your item has been removed by mistake, please contact Steam Support.
This item is incompatible with Greenlight. Please see the instructions page for reasons why this item might not work within Greenlight.
Current visibility: Hidden
This item will only be visible to you, admins, and anyone marked as a creator.
Current visibility: Friends-only
This item will only be visible in searches to you, your friends, and admins.
Manor of the Damned!
Description Discussions0 Announcements1 Comments111 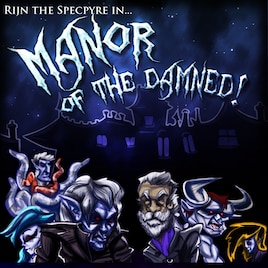 syn9
Online
See all 26 collections (some may be hidden)

View Manor of the Damned! in the store

Tonight we finally pushed into the TOP 100 games on Steam Greenlight! Please tell everyone you know and let's get to the top! Thank you so much!

- Engaging Story! -
You play a wandering vagabond swept up into the twisted lives of the immortal specpyres.

- Puzzles and Exploration! -
Only a sharp mind can unravel the secrets of the manor and the horrors of its past.

- Retro Style! -
Sound effects and graphics inspired by the classics.

- Multiple Languages! -
Play in either English, French or Swedish.
< >
111 Comments

syn9  [author] Jul 31, 2016 @ 10:50am
Thanks for pointing that out. It looks like the server is down. I contacted my host to get it resolved asap. You can send an email to contact [at] thehideoutgames.com in the meantime if you're interested in beta testing. That goes for anyone else following this thread as well. I'll post a link to the sequel Greenlight page once it's available. Thanks!

markzero Jul 31, 2016 @ 10:16am
Thanks for the response, syn9! Unfortunately, I'm now getting a timeout trying to reach The Hideout Games' website. I'll try again later.

syn9  [author] Jul 31, 2016 @ 2:22am
Hi markzero. Thanks for your comment. It's nice to see that people still care about this game. We're actually working on a sequel that will be released later this year. Please drop me an email on our website if you're interested in beta testing.

Manor of the Damned! has been Greenlit and is now listed in the Steam store. For the latest information, purchase options, and discussions for Manor of the Damned!, please see it on the Steam Store or in the Steam Community.
Visit Store Page
For more details Visit Community Hub
For latest discussions
If you really, really want to, you can continue to the Greenlight page. Information on this page may be out of date, since all the action has moved to the areas noted above.