Greenlight > Games > GF's Workshop
Greenlight is being retired. For more information on how to submit games to steam, refer to this blog post.
This item has been removed from the community because it violates Steam Community & Content Guidelines. It is only visible to you. If you believe your item has been removed by mistake, please contact Steam Support.
This item is incompatible with Greenlight. Please see the instructions page for reasons why this item might not work within Greenlight.
Current visibility: Hidden
This item will only be visible to you, admins, and anyone marked as a creator.
Current visibility: Friends-only
This item will only be visible in searches to you, your friends, and admins.
Folk Tale
Description Discussions17 Announcements4 Comments1479 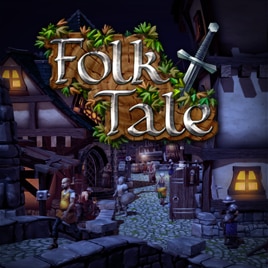 GF
Offline
See all 151 collections (some may be hidden)

View Folk Tale in the store

We are delighted to announce that Folk Tale alpha is now available to buy on Steam Early Access for PC and Mac. We are working on the Linux version.

Great news folks. For eager fans the wait is almost over, with the Folk Tale Alpha scheduled for PC launch on Steam Early Access 31 May ( 30th in North America ). We'll try our very best to make Mac and Linux versions available soon after.

OVERVIEW
Folk Tale will be a sandbox fantasy city builder strategy game in which you lead a ragtag band of peasants in growing a small settlement into a thriving market town, while the dastardly Slavemaster Urzal and his minions plot your downfall. Sound the rallying call and head out into the wilds with parties of heroes and fight back the tide of evil in a game of endless possibilities.

Rule with tyranny and oppression, or liberalism and justice. Play as a merciless expansionist hell-bent on destruction, or as a gold-hoarding mercantilist who'll sell their own grandmother. With random events and dynamic story, in Folk Tale you never know how the story will unfold.

Folk Tale for PC, Mac and Linux is developed by indie collaboration studio Games Foundry. Our small team spans 15 time zones and is yet to meet face to face, but talk every day to bring you a refreshing and exciting break from conventional gaming.

Continuing our policy of transparency, we would like to share with you the current state of Folk Tale, and our plans immediately following launch of the alpha on Steam Early Access so that you may make an informed purchase. We encourage you to read the Steam Early Access FAQ to familiarize yourself with this new and exciting way to play and support games.

Folk Tale in its current form is a linear mini-campaign tutorial introducing gameplay concepts that we plan to include in the final game. As a game being organically developed based on community feedback, not all game elements are presented in the tutorial, and some that are may not be included in the final game. After graduating Steam Greenlight, we asked the community which game mode they would most prefer, and they voted for sandbox. Our plan following Early Access launch is to implement sandbox mode as the primary playable option. Sandbox mode IS NOT currently available, and will be rolled out as game updates in coming months.

That said, the mini-campaign is packed with entertainment including over 10 minutes of voice acted cut scenes and might be considered a feature-rich game in its own right. We hope many of you do choose to support us during Early Access, and look forward to hearing your thoughts and ideas on how we can make Folk Tale a kick-ass city-builder sandbox game.

We welcome your questions and are here to help as always.

class101 [linux] Sep 5, 2013 @ 2:45pm
This game has been reviewed and added to the Procedurally generated games collection

Folk Tale has been Greenlit and is now listed in the Steam store. For the latest information, purchase options, and discussions for Folk Tale, please see it on the Steam Store or in the Steam Community.
Visit Store Page
For more details Visit Community Hub
For latest discussions
If you really, really want to, you can continue to the Greenlight page. Information on this page may be out of date, since all the action has moved to the areas noted above.