Greenlight > Games > Aaron Foster's Workshop
Greenlight is being retired. For more information on how to submit games to steam, refer to this blog post.
This item has been removed from the community because it violates Steam Community & Content Guidelines. It is only visible to you. If you believe your item has been removed by mistake, please contact Steam Support.
This item is incompatible with Greenlight. Please see the instructions page for reasons why this item might not work within Greenlight.
Current visibility: Hidden
This item will only be visible to you, admins, and anyone marked as a creator.
Current visibility: Friends-only
This item will only be visible in searches to you, your friends, and admins.
Routine
Description Discussions154 Announcements14 Comments6003 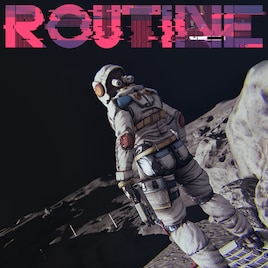 Aaron Foster
Offline
See all 1102 collections (some may be hidden)
Recent Announcements View All (14)
March they said...
March 23, 2017 - Aaron Foster

Its March, and as our Release Date Trailer revealed a while back, it is release month!
When we last made an Update in October, we talked about how we could rush a release date of December 2016, but wanted to have a few extra months to really make sure that the game was polished and felt like something we could be proud of releasing, so we came up with a March Release Window.

That extra time has been invaluable to the project, and as things were being put into a final release state (Sound, Animations, Gameplay) we felt a great amount of joy and satisfaction in seeing everything in Routine really come to life. However, there was one thing we never felt clicked, and that was one of our paths.
Routine has always had two ways to progress through the game, each with their own unique endings, but we never quite knew how they would feel until the game content & experience was really polished up and playable as one solid, consistent, experience.

We made the call at the end of January that our second path was just not as strong as the other. If you follow us on twitter you may have noticed over these last two months that we've been very inactive, and the reason has been that we've just crunched like crazy to try and hit that March Release date. It's looking like we just can't do that, there are still a few things that require our attention. You have waited almost 5 years for Routine, and we want to make sure that what we give you in the end is nothing short of the best we can give you. We're genuinely sorry to announce this small delay, but we feel like the last thing we want to do is disappoint all of the people that given us their love, support and kindness, by releasing something that didn't feel complete.

We only get to release Routine once, and we want to make sure we do it right. We don't expect the delay to add more than a month or two and when we next update, we promise to finally give you a clear release date with a game that we are proud of.

Once again from the bottom of our hearts, thank you all for your patience and support.
-Lunar Software

It’s been a while since our last update back in December, and for that we can only apologise. Our heads are deep in development and we wanted to make sure that with our next update, we could give you guys something substantial. So with that said, we are super happy to announce that Routine finally has a release date (release window to be more exact)!

If you follow us on twitter, you may have noticed that we were hinting towards a late 2016 release. We have been working like crazy to try and hit that mark without compromising the quality of the game and at this rate, we would be releasing way too close to the Steam Christmas Sales (which would be devastating for us). In the end we felt like it was best to just not rush things at this final hurdle.

We hope you enjoy the trailer and that it can make the final months until release a little easier, we can’t thank you all enough for being so patient and supportive over these years. It’s incredibly motivating to read your kind messages even when development has took so much longer than expected.

We’ll hopefully be able to update you guys a few more times before release, as we stamp off content and prepare to finally share Routine with everyone.

Thank you again from everyone here, and we hope you have a Happy Halloween!
-Lunar Software

Read More
Description
Release date: March 2017
Routine is a first person Survival Horror set on a abandoned Moon Base designed around an 80's vision of the future, Your job is to find enough data and survive long enough to uncover the truth behind the strange disappearance of everyone stationed on the Lunar Research Station.

Features:
You can always find out more from these places below:

THANK YOU ALL FOR THE VOTES, WE HAVE BEEN GREENLIT THANKS TO YOU GUYS!
< >
6,003 Comments

XallZall Jan 4 @ 2:46am
Hey Aaron, I only discovered this recently, I hope you give it some day another go. Very few games out there that have this sort of mystery and aura around them.
One of a kind for sure, would really be a shame and a waste if it was never completed, so I hope you can complete it, there is interest.

David_Hater Apr 27, 2020 @ 6:38am
Too bad this one got caught in development hell, but thanks god Alien Isolation happened in the meantime.

Brupcat Apr 20, 2020 @ 7:31pm
Hey gold_section, you do realize the game is likely cancelled, and also in development hell?

gold_section Apr 12, 2020 @ 9:08am
Well right in assuming that the bigger production games need more having hundreds and thousands of people. for that big video game come out early release !