Greenlight > Games > gorbon's Workshop
Greenlight is being retired. For more information on how to submit games to steam, refer to this blog post.
This item has been removed from the community because it violates Steam Community & Content Guidelines. It is only visible to you. If you believe your item has been removed by mistake, please contact Steam Support.
This item is incompatible with Greenlight. Please see the instructions page for reasons why this item might not work within Greenlight.
Current visibility: Hidden
This item will only be visible to you, admins, and anyone marked as a creator.
Current visibility: Friends-only
This item will only be visible in searches to you, your friends, and admins.
Beast Boxing Turbo
Description Discussions5 Announcements7 Comments244 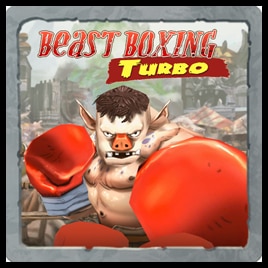 gorbon
Offline
See all 55 collections (some may be hidden)

Just wanted to share the great news that Beast Boxing Turbo was Greenlit in the October batch of 100 titles! It will be available on Steam very shortly, and keys will be sent out shortly to all existing buyers. To everyone who bought our game, promoted us, played our demos, and voted for us on Greenlight - thanks for all your support! For the official announcement and to see the other titles that were Greenlit, visit the Steam Greenlight announcement here:

That's right - now's your chance to get a bundle of 6 great indie games that are still on Greenlight, including Beast Boxing Turbo! The games included (other than BBT) are Croixleur, Dawnstar, Battlepaths, Out There Somewhere, and Diehard Dungeon, all available now if you can beat the current minimum price of $4.42. We're also throwing in four original music tracks from Beast Boxing Turbo and some high-res graphics for diehard fans.

For more information, visit http://www.indieroyale.com and check it out!

Beast Boxing Turbo was Greenlit and will be available on Steam soon! Thanks for your support - if you already bought the game, your keys will be sent out soon!

You play a secret human boxer in a beastly world. She's outmuscled, undersized, and in way over her head. Can she master the skills needed to get to the top of the legendary boxing leagues of Beasthalla?

Develop a fighting rhythm between attack and defense, and don't give up hope if you can't beat these monsters on your first try. There's a host of skills to train, and new gear to acquire that can give you an edge in the ring. Build up your boxing skills and gear to match your personal style, and beat the grand champion of the Ultra League to unlock NewGame Plus mode and reach a new level of challenge.

Beast Boxing Turbo was developed as a collaboration between Gordon Luk of Goodhustle Studios and Khang Le, along with other talented artists.

Will this game be added to Desura?
Motoki

Slayer_Mark Jan 7, 2014 @ 8:03pm
I think that a Character Selection and a 3 minute timed round perk and maybe a Team fight would be a good inclusion to this game.

CrackMasterK Nov 21, 2013 @ 7:41am
Hey just wanted you guys to know I started a gaming social network just for gamers and game developers. I would love it if Beast Boxing joined and made their own group on there. Also I will soon be creating a fan page section!

Beast Boxing Turbo has been Greenlit and is now listed in the Steam store. For the latest information, purchase options, and discussions for Beast Boxing Turbo, please see it on the Steam Store or in the Steam Community.
Visit Store Page
For more details Visit Community Hub
For latest discussions
If you really, really want to, you can continue to the Greenlight page. Information on this page may be out of date, since all the action has moved to the areas noted above.