Greenlight > Games > Always Geeky's Workshop
Greenlight is being retired. For more information on how to submit games to steam, refer to this blog post.
This item has been removed from the community because it violates Steam Community & Content Guidelines. It is only visible to you. If you believe your item has been removed by mistake, please contact Steam Support.
This item is incompatible with Greenlight. Please see the instructions page for reasons why this item might not work within Greenlight.
Current visibility: Hidden
This item will only be visible to you, admins, and anyone marked as a creator.
Current visibility: Friends-only
This item will only be visible in searches to you, your friends, and admins.
Vox
Description Discussions8 Announcements5 Comments757 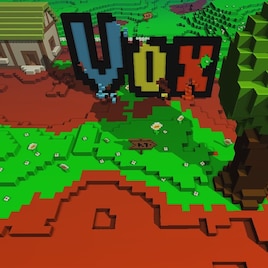 View Vox in the store

The latest update to Vox brings us up to pre-alpha v0.26 and here is the changelog:

The latest pre-alpha of Vox is now available from IndieDB and Desura.
Here are the new features and the changelist.

Vox started life as a voxel engine, created as an entry to the Ludum Dare 48 hour competition (Number 23).

Vox is an adventure and creation game currently under development and follows on from other voxel based games such as Minecraft and Infiniminer. Vox will have a big focus on player created content, and will allow the player to customize every aspect of the game.

Players can create their own custom characters, weapons, items, monsters, NPCs and everything else in the game. Since everything in the game is made up of voxels, everything can be edited and customized using the same interface. The editors and tools that allow for creation of voxel objects and sprites are part of the game and built into the gameplay of the game. This allows Vox to go one step further than other voxel based games, that only allow modification to the voxel world.

Vox will also feature a dynamic world that is populated with many interactive elements, such as monsters and NPC villages and will have a fully driven story and adventure mode. This mode also features a dynamic quest system that will give the player greater focus and drive to do more in the game than just 'create stuff'.

NOTE : There is currently a public playtest and alpha version available for anyone who wants to help test Vox. :)

I am also maintaining a tutorial and article site on voxel development and basically documenting the steps I took to make Vox, if you want to check that out or are interested in learning about making a voxel engine, then please have a look at: {LINK REMOVED}https://sites.google.com/site/letsmakeavoxelengine/

(NOTE : This game is not a clone/ripoff of Minecraft, Cube World, InfiniMiner or any other voxel based game. It is an original game being developed using the voxel/block style of rendering and features some voxel/block based gameplay.)

Fdainez (yt: goplaygamesbr) Jun 4, 2015 @ 4:13pm
DO NOT BUY THIS GAME, DEV SIMPLY ABANDONED AND DID NOT GAVE ANY EXPLANATION ON THIS.

Minecraftslave Nov 29, 2013 @ 10:02pm
This game looks great their is also another game thats like minecraft and world of warcraft called cubeworld.

Vox has been Greenlit and is now listed in the Steam store. For the latest information, purchase options, and discussions for Vox, please see it on the Steam Store or in the Steam Community.
Visit Store Page
For more details Visit Community Hub
For latest discussions
If you really, really want to, you can continue to the Greenlight page. Information on this page may be out of date, since all the action has moved to the areas noted above.