Greenlight > Games > ivs_matt's Workshop
Greenlight is being retired. For more information on how to submit games to steam, refer to this blog post.
This item has been removed from the community because it violates Steam Community & Content Guidelines. It is only visible to you. If you believe your item has been removed by mistake, please contact Steam Support.
This item is incompatible with Greenlight. Please see the instructions page for reasons why this item might not work within Greenlight.
Current visibility: Hidden
This item will only be visible to you, admins, and anyone marked as a creator.
Current visibility: Friends-only
This item will only be visible in searches to you, your friends, and admins.
Castle In The Darkness
Description Discussions3 Comments346 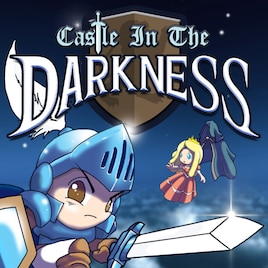 ivs_matt
Offline
See all 84 collections (some may be hidden)

View Castle In The Darkness in the store

The kingdom of Alexandria had slept peacfully for many years, free of wars and menace. But on the third full moon, fifty years after the king's victory over an ancient evil, the kingdom is attacked by a legion of evil monsters once again. The princess is kidnapped by an evil sorceror, and it's your duty as a royal knight to return her to the castle safely!

Castle In The Darkness is a retro-styled exploration platformer that blends the challenging-yet-rewarding gameplay concepts of classic NES games (like Megaman, Metroid, Castlevania etc.) with modern tight controls and fast play!

Originally posted by Logan Booker, Kotaku AU:
"It’ll be “very challenging”, a concept anyone who’s played Megaman will be very, very familiar with. As long as there are no bloody invisible blocks, I’ll be happy."

Originally posted by Chris Demelo, BonusLevel.com:
"dude we should grab sushi and talk about video games"

Darkneko Feb 10, 2015 @ 12:25am
Hi!My name is Christina Migliara and here my youtube channel where i vlog about video games and anime:https://www.youtube.com/channel/UCdPNUaZpUs_8cyNj_Fd4nYw . I am writing to you to ask if i can have review copy on your game? To promote your stuff

perlucido Jan 12, 2015 @ 1:22pm
Are you bored waiting the release of Castle in the Darkness?
You miss games like The Maze of Galious?
Try this other, it's free!!!
HYDRA CASTLE LABYRINTH

Castle In The Darkness has been Greenlit and is now listed in the Steam store. For the latest information, purchase options, and discussions for Castle In The Darkness, please see it on the Steam Store or in the Steam Community.
Visit Store Page
For more details Visit Community Hub
For latest discussions
If you really, really want to, you can continue to the Greenlight page. Information on this page may be out of date, since all the action has moved to the areas noted above.