Greenlight > Games > RampantCoyote's Workshop
Greenlight is being retired. For more information on how to submit games to steam, refer to this blog post.
This item has been removed from the community because it violates Steam Community & Content Guidelines. It is only visible to you. If you believe your item has been removed by mistake, please contact Steam Support.
This item is incompatible with Greenlight. Please see the instructions page for reasons why this item might not work within Greenlight.
Current visibility: Hidden
This item will only be visible to you, admins, and anyone marked as a creator.
Current visibility: Friends-only
This item will only be visible in searches to you, your friends, and admins.
Frayed Knights: The Skull of S'makh-Daon
Description Discussions0 Announcements2 Comments193 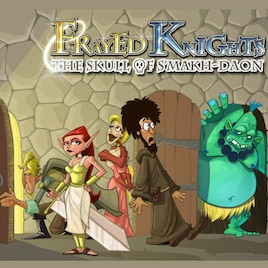 View Frayed Knights: The Skull of S'makh-Daon in the store

We're launched, with a fun launch sale. If you've been waiting for this game, now's your chance!

Frayed Knights: The Skull of S'makh-Daon on Steam

A new video review of Frayed Knights: The Skull of S'makh-Daon by The Greenlighters, who talk about games which have been "lost" in Greenlight for a while...

Frayed Knights: The Skull of S'makh-Daon is a 3D indie computer RPG for Windows featuring turn-based combat, old-school sensibilities, and a story of high adventure and comedy. Who says RPGs have to be so serious?

In a world of jaded heroes and veteran adventurers, you play a team of misfits: Arianna, a dainty warrior with an attitude problem; Dirk, an adrenaline-junky rogue who doesn’t seem to understand the word ‘subtle;’ Benjamin, a nature-priest and an ill-suited newcomer to the adventuring lifestyle, and Chloe, a ditsy sorceress with a love of cute, fuzzy animals and setting her enemies on fire.

Adventuring is always a dangerous profession, but recently things have gotten bad. Very bad. Teams of expert fortune-hunters are getting "morted," suffering great losses against enemies that are better prepared than ever. In the taverns and Adventurer's Guildhalls, whispered rumors speak of the return of an evil that once all but destroyed civilization. But as many great and famous adventurers fall to this growing threat, perhaps this bunch of losers - called "The Frayed Knights" (but never to their faces) - might just be the heroes the world really needs:

The wrong people at the wrong time.

RampantCoyote  [author] Jul 11, 2014 @ 11:05pm
Yeah, I'll try and work something out with them, or otherwise work out some automated way of working things out. Worst case, we can handle it manually, but that won't be a lot of fun on my end...

RampantCoyote  [author] Jun 26, 2014 @ 1:47pm
Yeah, I figure July might be a little dead, too... post-Summer-Sale hangovers and all that. I'm currently working on treating it as a relaunch (while being knee-deep in the sequel, still). Very, very excited here. I hope you folks will love it!

josephdw106 Jun 26, 2014 @ 9:17am
FIrst off Congrats ive hilariously been waiting 2 years to play this game as i like to own stuff on my steam site and not have to dig up stuff everywhere... secondly it figures a greenlight right before the summer sale as i still cannot purchase it yet!!! ah well it will be here shortly.

RampantCoyote  [author] Jun 15, 2014 @ 8:34pm
:) Thanks, Augmenti. Working on it. I'm looking into what it'd take to add some Steam integration into the game. I don't know if it will make any difference in the final analysis, but it should be fun...

Now get to work, getting the game up for sale! ;)

Thank you everybody! Thanks for your support. It has been a long time coming.

Frayed Knights: The Skull of S'makh-Daon has been Greenlit and is now listed in the Steam store. For the latest information, purchase options, and discussions for Frayed Knights: The Skull of S'makh-Daon, please see it on the Steam Store or in the Steam Community.
Visit Store Page
For more details Visit Community Hub
For latest discussions
If you really, really want to, you can continue to the Greenlight page. Information on this page may be out of date, since all the action has moved to the areas noted above.