Greenlight > Games > Dogatello's Workshop
Greenlight is being retired. For more information on how to submit games to steam, refer to this blog post.
This item has been removed from the community because it violates Steam Community & Content Guidelines. It is only visible to you. If you believe your item has been removed by mistake, please contact Steam Support.
This item is incompatible with Greenlight. Please see the instructions page for reasons why this item might not work within Greenlight.
Current visibility: Hidden
This item will only be visible to you, admins, and anyone marked as a creator.
Current visibility: Friends-only
This item will only be visible in searches to you, your friends, and admins.
Guy Vs. The Wicked and Nefarious Land
Description Discussions2 Announcements16 Comments257 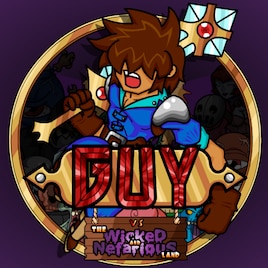 Hello guys and gals, we've got into 2018 with a very, very important objective!

NEWS FROM THE FRONT
When we got greenlit - back in 2015 - we've got happy, surprised and really, really thoughtful about it. The game was complete by then, had plenty of hours of gameplay, hardcore players focused challenges, plenty of enemies, fun fights with bosses, charismatic characters and a relatively interesting story. Everything was made with quite a lot of care, dedication and love. Of course, the game had its share of problems and wasn't looking good enough, at least not good enough to make it to Steam and be together with so many great titles.

Thinking about that propelled us on making a lot of new stuff, getting new ideas and making compromises on substantial changes. Well, everyone dreams big, right? The first thing we noticed is that the game didn't age that well, it couldn't be released on the same shape it was initially made, we wanted to add a lot of new content and depth, while staying true to our beginning. From assets to framework, there was a lot to work on. And well, we did a lot of work on those.

HARDER, BETTER, STRONGER
A lot of assets were made, from monsters to tilesets. From special effects to new weapons. In parallel we've got to research new engines possibilities while salvaging as much code as possible. We went through months of experimentations, a boring chore that had to be done slowly as possible. We had to make sure that we understood everything and that engine would be able to do everything we needed. That kind of work is quite costful on our morale, since most of our energy is spent on testing and we don't get that much to show out of it, instead we get a lot of knowledge.

We aren't the fastest, that is given, and we are always apologizing about that. We are doing our best to not let the pressure and our anxiety to take its toll, we want to polish the game as much as possible and make the experience worthwhile. By the end of the last year we had a lot defined and done, we still had to get a few issues flattened. With the new year's holidays we got the cherished time needed for those issues. We've got ourselves on a stage where the game got a better shape and we've made up our minds on a alpha release date, which is July.

Down here we will list what you guys we will see on this alpha release:
With that alpha release we hope to collect enough data to guide our next steps, while testing a few stuff, like our inventory system, dialogs, core mechanics and game progression.

We sincerely hope that everyone is as excited as we are right now. Down there you guys can check a little preview of how the physics works on the new engine. On the next month we will have plenty of new content, stay tuned!

Disclaimer: The announcement down below was written under coffee influence, user discretion is advised.

Hello guys and gals, we hope everyone is doing fine. Without further ado, let’s get to it.

We are currently focusing on getting as many assets done as possible, specially for the game intro and tutorial. Soon we will be moving to the dialogues assets, as textboxes, buttons and animated portraits.

All The Small Things

While at it we also worked on small tweaks on a few animations, things that we had planned to do but never got into it, like adding a few particles and glowy things.

Soon Enough
We are also finally done with all the monsters for the second dungeon. Take a sneak peek on how our dapper skeleton lord is looking now.

Well, that is it for now everyone! If you have any comments, doubts or suggestions, please, feel free to contact us here or in any other social media. We can be reached through Facebook, Twitter or Tumblr, it is your call.

We hope you all have a great week!
Read More
Description
Release date: July 2012
"No more wannabes" - Indie Game Magazine

" I’ve got to say that I’m pretty impressed with it. Also: It is hard. Basically, Guy vs the Wicked and Nefarious Land is game that has a lot in common with The Binding of Isaac. It’s not the same, of course, with Guy versus the Wicked and Nefarious Land concentrating much more on fighting waves of enemies, but the Zelda-inspired dungeons and the Roguelike inspirations certainly make for some comparisons. - Futile Position

You're not on your typical dungeon crawler anymore. Guy vs. The Wicked and Nefarious Land comes to put up a challenge to the most skilled players. With a top down view and fast paced action, you must guide Guy through 5 dungeons filled with evil creatures, traps and pop culture references. But fear not! While on Guy's shoes you will count with a handful of weapons, items and skills to be successful on your journey. But don't think it will be easy: To be the guy you must deserve it.

Dogatello  [author] Aug 13, 2016 @ 11:08am
BTW guys, don't shy away from PMing me, really. It might take sometime for me to go over the PMs, but I will answer them, I swear! Every feedback helps, really. We are close to release the early access here on Steam, giving access to all the new features and tweaks for the first dungeon, it will be really important that we get as much feedback as possible in that phase since it will dictate what we will do for the rest of the game. We might think that this thing is good, but it actually sucks and so on and so forth. So, feedback matters haha

Nonetheless, thanks once again for all the patience and support! :)

We are currently studying how to improve the engine in order to have a better resolution and increased FPS. I guess it is a good idea to write an announcement about that and the progress so far, isn't it?

Nonetheless, if you guys wanna see some more progress be sure to check out www.cogmonkeys.com or our facebook page, https://www.facebook.com/GuyVsTheWickedAndNefariousLand/

Your patience is appreciated and feedback is always welcome! Feel free to contact us!

Dogatello  [author] Mar 3, 2016 @ 3:15pm
Hey there guys! :) We still don't have a date for release, we are still working on reviewing a lot of stuff, we apologize for that. We will release the (revamped) game for early access as soon as the first dungeon come together, since your input will be of great value in order to refine the experience. But we do promise that your wait will be worthwhile, we are really excited how things are coming together, this revamp will bring a new life to the game! Thanks for your patience and support, it is amazing. Stay tunned for more news and announcements!