Greenlight > Games > Exis's Workshop
Greenlight is being retired. For more information on how to submit games to steam, refer to this blog post.
This item has been removed from the community because it violates Steam Community & Content Guidelines. It is only visible to you. If you believe your item has been removed by mistake, please contact Steam Support.
This item is incompatible with Greenlight. Please see the instructions page for reasons why this item might not work within Greenlight.
Current visibility: Hidden
This item will only be visible to you, admins, and anyone marked as a creator.
Current visibility: Friends-only
This item will only be visible in searches to you, your friends, and admins.
Majestic-12
Description Discussions1 Announcements6 Comments106 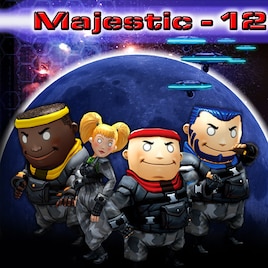 Exis
Offline
See all 7 collections (some may be hidden)

View Majestic-12 in the store

Hey Guys, we tried getting this going on steam, but for the time being it looks like we're going to be unable to release on Steam. If that changes, you'll be the first to know.

Alright folks, we're greenlit. We're considering what needs to be done to get the game out.

Read More
Description
Release date: Coming really , really, like... no, really soon.
Majestic-12 is a 3d action side-scroller where you take control of an elite MJ-12 commando and battle your way through secret installations and strange alien environments with your friends, or as a solo-operative. Mj12 has a retro vibe mixed with an exciting visual style and original game mechanics that will leave the player very satisfied. The game mixes humorous enemies with action-packed gameplay in single player, and several innovative multiplayer modes.

"To be honest I loved my time with this game while on the show floor. It was a great experience playing with multiple people and wrecking everything in our path from boxes and small enemies to the giant bosses (bear on a bulldozer)."

"I urge you to check this one out when it does make its way to the PC Market, I had a lot of fun demoing this one, I can't wait to see more."

"Majestic-12 is a zany dual stick style shooter…It essentially plays like a love letter to the arcade days long gone...If you've got a group of friends that love old-school arcade shooters, Majestic-12 would definitely be a title worth looking into."

"Actually, I can't wait to get my hands on this game. It seems pretty awesome and I've always enjoyed the nostalgic feel."

Majestic-12 has been Greenlit and is now listed in the Steam store. For the latest information, purchase options, and discussions for Majestic-12, please see it on the Steam Store or in the Steam Community.
Visit Store Page
For more details Visit Community Hub
For latest discussions
If you really, really want to, you can continue to the Greenlight page. Information on this page may be out of date, since all the action has moved to the areas noted above.