Greenlight > Games > Wolfire Games's Workshop
Greenlight is being retired. For more information on how to submit games to steam, refer to this blog post.
This item has been removed from the community because it violates Steam Community & Content Guidelines. It is only visible to you. If you believe your item has been removed by mistake, please contact Steam Support.
This item is incompatible with Greenlight. Please see the instructions page for reasons why this item might not work within Greenlight.
Current visibility: Hidden
This item will only be visible to you, admins, and anyone marked as a creator.
Current visibility: Friends-only
This item will only be visible in searches to you, your friends, and admins.
Receiver
Description Discussions2 Announcements4 Comments1490 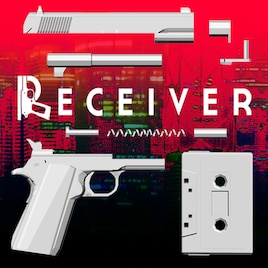 Wolfire Games
Offline
See all 122 collections (some may be hidden)

View Receiver in the store

If you have already purchased Receiver (or got it for free with Overgrowth), you can now claim your Steam key by going to the Humble Store page linked from your Receiver or Overgrowth purchase email.

I know this happened a while ago, but we should have Receiver up on Steam within the next few weeks! Thank you so much to everyone who spread the word and voted for us!

Read More
Description
Release date: Available Now!
Receiver was created for the 7-day FPS challenge to explore gun handling mechanics, randomized levels, and unordered storytelling. Armed only with a Colt 1911 A1 and an audiocassette player, you must uncover the secrets of the Mindkill in a building complex infested with automated turrets and hovering shock drones.

We would like to get to put Receiver on Steam so that users can add it to their Steam library for convenience, and receive automatic updates. We are continuing to work on the game, and this will make it a lot easier for users to get new builds as soon as we release them.

Update: We just added a S&W Model 10 Revolver and a Glock 17 with auto mod, as well as a Mini Maglite flashlight. You can see the video for that update above, second from the left.

blk_750 May 31, 2014 @ 6:23am
RE:This game is awesome but it would be even better if the story went somewhere like maybe you could escape the building and stop the evil news service currently it is like slender you run around finding pages/tapes
< >

Receiver has been Greenlit and is now listed in the Steam store. For the latest information, purchase options, and discussions for Receiver, please see it on the Steam Store or in the Steam Community.
Visit Store Page
For more details Visit Community Hub
For latest discussions
If you really, really want to, you can continue to the Greenlight page. Information on this page may be out of date, since all the action has moved to the areas noted above.