Greenlight > Games > Slack's Workshop
Greenlight is being retired. For more information on how to submit games to steam, refer to this blog post.
This item has been removed from the community because it violates Steam Community & Content Guidelines. It is only visible to you. If you believe your item has been removed by mistake, please contact Steam Support.
This item is incompatible with Greenlight. Please see the instructions page for reasons why this item might not work within Greenlight.
Current visibility: Hidden
This item will only be visible to you, admins, and anyone marked as a creator.
Current visibility: Friends-only
This item will only be visible in searches to you, your friends, and admins.
Private Infiltrator - Enhanced Edition
Description Discussions0 Announcements9 Comments349 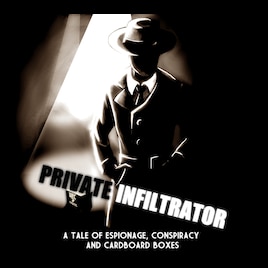 Our Lady of Fraudulence
Offline

Hello there, i am the lead developer for Private Infiltrator.

As you might know, we are redesigning the game for the Steam release in order to make sure that it is of the highest quality we can deliver.

This post is a list some of the major changes that will happen to the game as a result of this update.
Keep in mind that the images still represent a work in progress.

Enhanced Design
We have decided to adopt a less linear level design approach and give the player freedom to explore and complete numerous side-objectives that will have an effect on future levels. In a lot of cases, multiple ways to complete the same objective will also be present. Of course, amongst the more open levels there will be some relatively small, more linear ones, to introduce new mechanics to the player. This also means that we had to throw most of the old levels away and create brand new ones.
In order to accomodate for this change, new gameplay mechanics have been introduced:

Enhanced Gameplay Mechanics
Numerous improvements have been made to the game's mechanics.
Enhanced User Interface
The UI has been cleaned up and reordered. New additions such as the aforementioned radar and an inventory bar were also made.

Enhanced Story
Not many things should be said on this one, but we do have a lot of new things in store in terms of plot and narrative.

These were some of the more important changes the Enhanced Edition will bring to Private Infiltrator. It will be available on Steam and Desura whenever it's finished, and it will be a free upgrade for everyone who already owns the game.

Until next time.
-The Professor
Read More
We've Been Greenlit!
October 29, 2013 - Our Lady of Fraudulence

We've been Greenlit!
Thank all of you so much -- both those who own the game and those who will soon! We couldn't have made it without you. Seriously, thanks so much!

Now. Before I get into what Greenlight means for the game (other than the obvious), let me introduce myself.

Greenlit means Hello!
I'm Cassielle. I'm new here, basically I'm helping clean up some of the rough edges on Private Infiltrator for its next big milestone (Steam release). I'm also handling PR work temporarily while the good Professor works out the paperwork for Greenlight. I'm a writer, a musician and sound designer, and I have experience in PR, Marketing, and QA.

Below, I list some of the awesome stuff coming up for Private Infiltrator!

Greenlit means Enhanced Story!
We're going to be rewriting the plot for Private Infiltrator, with a darker (but still humorous!) storyline inspired by games such as Pathologic, Killer7, Space Funeral, and OFF, all of which are great games with amazing writing.

We'll update you all with a short story from the perspective of a non-player character in the game later this week, to give you a taste of where the plot is heading.

Greenlit means Enhanced Gameplay!
We're going to be tuning the gameplay with help from a new team member (that would be me!) with industry experience in QA. This means that frustrating or confusing gameplay elements will be reworked, minimized or rebalanced to present you, the players with a smoother, more exciting gameplay experience!

Greenlit means Enhanced Graphics!
We'll be working on the UI and other visuals to give you a game that's as fun to look at as it is to play! On the list is:

We'll keep you posted on these as they become ready!

Greenlit means Enhanced Features!
We know the questions are coming. Here's a list of things we intend to put in the Steam version of the game to take full advantage of the service!

Have any other requests for our Steam-focused enhancements? Let us know in the comments!

Greenlit means Enhanced Happiness!
About those questions we know about. People who already have a copy elsewhere will get this Enhanced Edition as an update to their original copy, where ever they bought it.

We also know about that other inevitable question. (Steam keys for early adoptors?) I have to discuss this with the good Professor before I can actually come back with a final answer for you. But at the risk of getting egg on my face, I will stick my neck out and say that I can't see any potential issues with it! This shouldn't be taken as a "for certain" thing, but I'd definitely consider it within the realm of reality.

Greenlit means Enhanced... Timeline?
We don't have a full timeline set out just yet. We have quite a bit of work to do! Right now our best estimates are about a month or two. We aren't re-creating everything from scratch, after all, just updating and upgrading it. We'll have a better feel for how long the development of the Enhanced Edition will take after we've been working on it a little longer, and we'll be sure to keep you guys up to date on it!

Greenlit and Goodbye!
This is all we have to say for the moment, but we'll certainly be keeping you guys up to date and informed on the upcoming goodies for the newly Greenlit Private Infiltrator! Until we have more to share with you though, this is Cassielle: signing off!

Uradamus Jul 23 @ 11:11pm
Found myself thinking about this again today out of the blue. Guessing there is a fair chance that the dev won't ever see this with Greenlight long dead and this game seems to have followed it to the grave. Bit of a shame really, had a lot of potential and even the old version was already kinda fun, but can't even access that one anymore with Desura also long gone. Here's to hoping it eventually sees the light of day.