Greenlight > Games > BDR's Workshop
Greenlight is being retired. For more information on how to submit games to steam, refer to this blog post.
This item has been removed from the community because it violates Steam Community & Content Guidelines. It is only visible to you. If you believe your item has been removed by mistake, please contact Steam Support.
This item is incompatible with Greenlight. Please see the instructions page for reasons why this item might not work within Greenlight.
Current visibility: Hidden
This item will only be visible to you, admins, and anyone marked as a creator.
Current visibility: Friends-only
This item will only be visible in searches to you, your friends, and admins.
Bleed
Description Discussions14 Announcements4 Comments1162 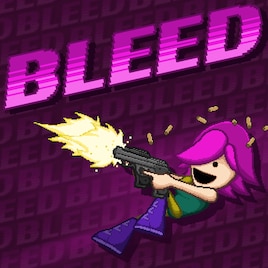 BDR
Online
See all 107 collections (some may be hidden)

View Bleed in the store

I just wanted to say a very sincere thank-you to everyone who voted the game up. This (obviously) wouldn't have happened if it weren't for you, and I am very grateful for the support.

I'll do my best to get the game out ASAP. I can't wait for everyone to play it and hope it lives up to any expectations you may have!

One more time, THANK YOU!
-Ian

The Bleed soundtrack has been released. You can get it here! [bootdiskrevolution.bandcamp.com] Pay what you want, or nothing at all!

Wryn wants to be the ultimate videogame hero, but the Greatest Heroes of All Time have already been chosen. Help her take them down one by one in an action-packed bid to claim the title for herself and show the world what a true hero looks like!


Features:
-A unique control scheme that allows you to slow time, weave through hails of bullets and clear roomfulls of enemies without breaking a sweat
-Seven levels packed with multiple set-pieces and bosses
-A large arsenal including a flamethrower, remote mines and a bullet-reflecting sword
-Difficulty levels ranging from laughably easy to maddeningly difficult
-Local co-op (requires at least one controller)
-Three unlockable characters that put their own twists on the gameplay mechanics
-Unlock Arcade Mode to try and survive the entire game on one life
-Unlock Challenge Mode to select and battle up to three bosses at once
< >
1,162 Comments

GANJAJESUS Oct 12, 2016 @ 10:29pm
Hello,
My name is Atreya, Moderator of GomesCorp Community and Steam group. I am an Indie Game Developer & also support Indie Developers in many ways, such as, Indie Dev Counselling, Digital Marketing, Greenlight Help, Press Reviewing, BETA Testing, Curation.
I am requesting you to send me a couple of keys for your game, it really looks amazing. We would like to cover it on our website, news and YouTube, social media channels. Henceforth, boosting your games online presence, popularity and recommendations.
Additionally I have added you developers on Steam for you to contact me, if not drop a request on my Steam ID : atreya_god and E-Mail the keys at atreya@gomescorp.com.
For additional services like giveaways etc. visit.
Website: www.GomesCorp.com
Thanks

StrongJoshua Jul 10, 2013 @ 9:09am
Lol @Hellmonkey the first post makes me kind of sad to see people like that voting on greenlight games :3

Bleed has been Greenlit and is now listed in the Steam store. For the latest information, purchase options, and discussions for Bleed, please see it on the Steam Store or in the Steam Community.
Visit Store Page
For more details Visit Community Hub
For latest discussions
If you really, really want to, you can continue to the Greenlight page. Information on this page may be out of date, since all the action has moved to the areas noted above.