Greenlight > Games > Arvind's Workshop
Greenlight is being retired. For more information on how to submit games to steam, refer to this blog post.
This item has been removed from the community because it violates Steam Community & Content Guidelines. It is only visible to you. If you believe your item has been removed by mistake, please contact Steam Support.
This item is incompatible with Greenlight. Please see the instructions page for reasons why this item might not work within Greenlight.
Current visibility: Hidden
This item will only be visible to you, admins, and anyone marked as a creator.
Current visibility: Friends-only
This item will only be visible in searches to you, your friends, and admins.
Will Fight for Food: Super Actual Sellout: Game of the Hour
Description Discussions0 Announcements7 Comments223 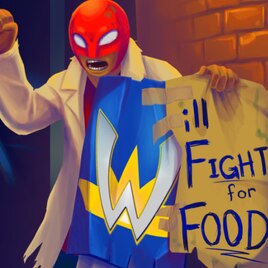 Arvind
Online
See all 35 collections (some may be hidden)

View Will Fight for Food: Super Actual Sellout: Game of the Hour in the store

Well, after a long and anxious wait, WFFF: SAS: GOTH is finally live on Steam!

Thanks to everyone who voted for it on Greenlight and supported us on our way, you're the best! :champbelt:

Read More
Description
Release date: April 2012
Will Fight for Food is a Role Playing Brawler where you control Jared, a wrestler whose career took a nosedive after losing in the biggest tournament of his life. Decide how and if he finds his feet in a city where the specter of the Whateville Fighting Federation looms over everything.

Choose your friends and foes wisely in a quest for closure. Use methods ranging from good samatarian to violent bloodlust. Encounter cosplayers, beings from another dimension, super villains, secret service, mob bosses and many more!

If the game is accepted on Steam Greenlight, we will release a brand new version of the game with upgrades to the engine, additional quests, enemies, more conversations and polish! The Extra Hunger Edition of the game will be better in every way!

Steam Keys will be given to all current owners of the game!
< >
223 Comments

Zardrex Nov 2, 2014 @ 9:42pm
thanks for the response, i have never met developers kind enough to adleast give a response so that means alot.

Arvind  [author] Nov 2, 2014 @ 8:38pm
@SychoticGamer: We're working on this, but since we promised an improved game (and we're all working on it in our spare time) it will take some time before we have any news. It isn't dead, though!

Fishman465 Sep 11, 2014 @ 12:30am
Depending on if you still have to go through it considering how this would be your second game here. But I'm glad to see this greenlit.

Arvind  [author] Jun 25, 2014 @ 5:13am
@Korefuji: We will have to see about A.Typical RPG, it is very old and I wrote it a long time ago - bringing it to Steam will definitely be a lot harder than Will Fight for Food.

First I will release Unrest, then Will Fight for Food and then we'll evaluate if ATRPG can be brought to Steam :)

korefuji Jun 25, 2014 @ 5:09am
great, thanks for the reply. Even with no more new features, teh game rocks anyway, anything else is a bonus. I'm curious about unrest, I'm trying to guage an opinion on it before committing - are you bring a.tyipcal rpg to steam too?
< >