Greenlight > Games > kaneb's Workshop
Greenlight is being retired. For more information on how to submit games to steam, refer to this blog post.
This item has been removed from the community because it violates Steam Community & Content Guidelines. It is only visible to you. If you believe your item has been removed by mistake, please contact Steam Support.
This item is incompatible with Greenlight. Please see the instructions page for reasons why this item might not work within Greenlight.
Current visibility: Hidden
This item will only be visible to you, admins, and anyone marked as a creator.
Current visibility: Friends-only
This item will only be visible in searches to you, your friends, and admins.
DLC Quest
Description Discussions8 Announcements1 Comments1626 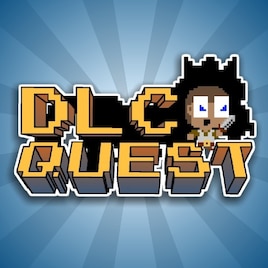 kaneb
Offline
See all 127 collections (some may be hidden)

View DLC Quest in the store

DLC Quest is now available! Thank you all for your support and especially your patience!

Includes:
- Two full length campaigns: the original award-winning "DLC Quest", and the brand new "Live Freemium or Die"
- Platforming action! Coins to collect, a princess to save, a bad guy (or two) to defeat. You like that stuff, right?
- Over 30 different DLC packs, each providing quiet introspection on the state of the gaming industry
- Over 20 awardments to earn and make you feel reasonably satisfied with yourself
- Online leaderboards and achievements

Go grab it at 20% off to celebrate launch week!

What happens when DLC practices go too far? An indie developer makes a game that mocks the industry and its foibles, that's what! Defeat the bad guy, save the world and get the girl! But first you'll need to find coins to buy DLC to enable animation, sound and even pausing. Thankfully this is just satire and all the DLC is purchased with in-game coins. But consider it a cautionary tale for the future...

Check out the teaser trailer above for "Live Freemium or Die!", the brand new campaign being developed for all the fans who demanded more DLC, MORE DLC and even occasionally "MOAR DLC".

Live Freemium or Die will give players a new world to explore, new enemies to face and of course, new DLC to purchase. With in-game coins. Because it would just be silly with real money.

DLC Quest has been Greenlit and is now listed in the Steam store. For the latest information, purchase options, and discussions for DLC Quest, please see it on the Steam Store or in the Steam Community.
Visit Store Page
For more details Visit Community Hub
For latest discussions
If you really, really want to, you can continue to the Greenlight page. Information on this page may be out of date, since all the action has moved to the areas noted above.