Greenlight > Games > 柏风铃's Workshop
Greenlight is being retired. For more information on how to submit games to steam, refer to this blog post.
This item has been removed from the community because it violates Steam Community & Content Guidelines. It is only visible to you. If you believe your item has been removed by mistake, please contact Steam Support.
This item is incompatible with Greenlight. Please see the instructions page for reasons why this item might not work within Greenlight.
Current visibility: Hidden
This item will only be visible to you, admins, and anyone marked as a creator.
Current visibility: Friends-only
This item will only be visible in searches to you, your friends, and admins.
Fantasia Of the Wind
Description Discussions0 Announcements2 Comments261 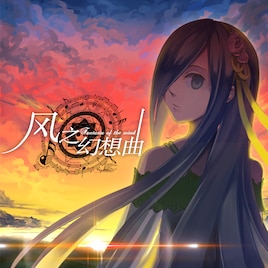 健哥Creator_Z
Offline
See all 17 collections (some may be hidden)

View Fantasia Of the Wind in the store

Fantasia of the wind has been Greenlit! It just spent five days! Thanks for your support. You can tell us your idea and advice about the game to help us make it better! Thank you!
绿光通辣！就用了五天！感谢支持！欢迎向我们提出意见和建议，我们会把游戏做得更好！谢谢！

In order to help English players to learn our game more, I translate game information into English. I'm sorry about my broken English, but still hope it can heip you. Thanks for your concern.

Fantasia of the Wind is is an adventure puzzle role-playing game (AVG + RPG) produced by Fantasia Group, which is the first game of the Fantasia Series. The engine is RPGMaker MV, supporting controllers, mouse and keyboard operations.
It is an adventure story about a girl named Sandra who lived in a small village. One day, she got a magic gem of life in a relic. But when she returned to the village, she found all villagers were brutally killed. In order to save her grandfather and the villagers, Sandra signed a contract with the goddess of time, back to the time point before villagers being killed, hoping to change everything ... ...
Now the DEMO has only Chinese language.
DEMO download:
{LINK REMOVED}http://pan.baidu.com/s/1eSgQOyI

The game will be multi-route design. Our goal is to allow players to get completely different experience during new game+ and new game++. Even the same time point of the same route will be a little different with the game proceeding. The first playthrough will take 5-6 hours, and the second playthough(NG+) will take 10 hours or more. The whole game playthrough will take more than 20 hours.
There will be a huge number of side quests as supplement of the main story. We need more content to deliver our fantasy world view to each player. (Note: Side quests, collection elements and challenge elements will also change as the game proceeds.)

The amount of scenario text in demo is about 100,000 Chinese words. It will reach 600,000 to 800,000 when finished to ensure a more complete expression of the world view. (We are sorry that we are temporarily unable to count the words in demo of English version because we haven’t finished it yet.)
We try to design multiple puzzles and multiple solutions in a same map for players who explore in NG+. When using some special methods to solve the puzzles, players can be surprised to find: How can the solution be so? There is still a thing hidden here? This is completely different from the last time I playthrough! We think explore and discover are two biggest pleasure of the puzzle game.
However, players do not need to worry about the difficulty of the game. Puzzles in main story will be relatively easy to solve. So players can enjoy main story without too much pressure. For core puzzle game player, we prepare a large number of side quests and challenge puzzles. Side quests and hidden content can be discovered by some evidence. They will unlock some special achievements. The feeling of complete the challenge which seemed to have no solution must be cool!

The granddaughter of a blacksmith in a small Village. There was no information about her parents, she just lived with her grandfather. She was taught to be kind and honest. After the death of grandfather, she signed a contract with goddess of time and returned to the past, hoping to change everything ... ...
Skill: Returning- Instantly return to the start point of the map

Aurora’s blacksmith. He was a member of Kingdom Knights and set a lot of exploits in Marcus War before losing an eye in a battle. He has excellent skills of forging and tailor. Many legendary weapons of Kingdom Knights are made by him.
Skill: Strength- Crush rocks Move heavy objects

A young nun of Gülla church, orphan. She lived with her elder sister in childhood. But after her sister’s death, she lost in sadness and confusion. At that time, priest Murphy helped her and became her teacher. Now Mignon is a cheerful and happy girl which can use light magic well.
Skill: Cure- Disperse debuff Cure wounds

Daughter of Dark Crow Chamber Of Commerce’s president, talented and outgoing. She learned business from an early age because of her father. But she doesn’t want to be a businessman like her father. She is good at identification of rare herbs and pharmaceutical refining. Her dream is to be the greatest pharmacist of the kingdom.
Skill: Gather- Able to gather herbs in map

A member of Paradise Circus, war orphan. Because of the harsh environment ,Brook represses his emotion and grows to be self-contemptuous. Although he hopes to delight others by his circus show, sometime he makes a mess which due to his lack of self-confidence.
Skill: Destroying- Destroy magic circle Counter magic

A member of an assassination organization named Eagle, good at unlocking and assassination. He is the top killer in the organization. Although Eagle is an organization which just care about money and regardless about morality, Quilla only kills ones who he thinks to be evil.
Skill: Unlocking- Use tools to unlock most of locks

(More characters will be published in the future.)

The game will be finished in the fourth quarter of 2017. English version may publish a little later than Chinese version cause we need time to translate texts. English words in game will be much better than this introduction because my English is really poor. We will find professional translators to deal with this work.

(If there is any wrong word, please point out in comment. We will correct it as soon as possible. Thank you!)
< >
261 Comments

Fantasia Of the Wind has been Greenlit and is now listed in the Steam store. For the latest information, purchase options, and discussions for Fantasia Of the Wind, please see it on the Steam Store or in the Steam Community.
Visit Store Page
For more details Visit Community Hub
For latest discussions
If you really, really want to, you can continue to the Greenlight page. Information on this page may be out of date, since all the action has moved to the areas noted above.