Greenlight > Games > samread's Workshop
Greenlight is being retired. For more information on how to submit games to steam, refer to this blog post.
This item has been removed from the community because it violates Steam Community & Content Guidelines. It is only visible to you. If you believe your item has been removed by mistake, please contact Steam Support.
This item is incompatible with Greenlight. Please see the instructions page for reasons why this item might not work within Greenlight.
Current visibility: Hidden
This item will only be visible to you, admins, and anyone marked as a creator.
Current visibility: Friends-only
This item will only be visible in searches to you, your friends, and admins.
Dream
Description Discussions9 Announcements14 Comments2216 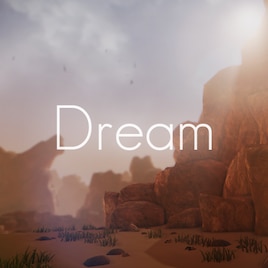 Mr Crocker
Online
See all 331 collections (some may be hidden)

View Dream in the store

We are super excited to announce Dream will be available on Steam Early access from August the 13th!

Ash has written a blog about it over on our site which you can find here: {LINK REMOVED}http://bit.ly/14jTqqN

Thanks for all the support, we wouldn't be here without Greenlight!
- Sam

Big News! We're excited to announce that we signed a deal with Mastertronic to continue working on Dream. To read more about it, find out what we have been up to and how things are changing click here to read the full blog post
http://dreamthegame.co.uk/?p=496

Read More
Description
Release date: On Early Access Now!
Dream is a first person atmospheric exploration game that has you assume the role of Howard Phillips, a young graduate with no direction in life who develops an obsession with his dreams. Discover dreams and nightmares filled with puzzles and secrets to help Howard find the meaning to his life.

The narrative is split into 3 acts with multiple endings that are possible based on how much you as a player have explored. Each act immerses you in new worlds that help to decipher Howards past, emotions and ambitions. Confront Howard’s mislaid concerns in the form of nightmares and reconcile the loss of his uncle.

Unique 3D Environments
Every environment in the game is lovingly hand-crafted by our close-knit team of three and with no worldly restrictions to the environments we can have a vast range of aesthetics.

Non-linear Narrative and Gameplay
Because you are free to explore the environments in varying orders the narrative is told in a holistic manner.

Multiple Endings
It's entirely possible to reach the story’s finale whilst having missed entire areas of the game, but doing so can affect the ending you receive.

Collectables and Secrets
Each dream is filled with secrets and collectables that help the player progress and contribute to the story.

Oculus Rift
Dream will be supporting the Oculus Rift at its launch.

Soundtrack
The game features an original soundtrack which will also be downloadable at launch.

The 'Dream' Pre-Alpha is now available for download to everyone who donated £5 or more! Head over to the forum to give it a go...
http://www.dreamthegame.co.uk/
If you haven't yet you can still donate to get access to the pre-alpha and all future releases .

We are now on Kickstarter! Back 'Dream'
here - http://www.kickstarter.com/projects/samread/dream-0

We have entered the student catagory in IGF, wish us luck!

Dream has been Greenlit! Thanks for the support.

We are now happy to annouce we will be supporting mac!

We’ll be at Eurogamer 2012 with a playable demo of the game!

Thank you for the initial response to our game! In regards to some common questions in the comments we thought we’d give an update with more information about the gameplay, narrative and technical aspects of the development.

Dream’s gameplay is strongly based around exploration with games like Yume Nikki and LSD being the first inspiration for the concept. On top of this we have been inspired by Dear Esther’s narrative elements and environments, the resulting gameplay maintains aspects of all 3 games. There will be many puzzles to solve, horror sections and some more narrative focused areas. So hopefully it’ll have a range of elements to enjoy.

We will be adding a gameplay video soon to showcase this more after we attend Eurogamer at the end of September. We are still only a few months into development (although we’ve been planning the game for over a year now) and are only showing the game so early to take full advantage of steams new Greenlight system.

Howard Phillips is a reference to Lovecraft as a lot of you instantly noticed and this is because the games story focuses on creative writing, the game itself isn’t about Lovecraft himself (sorry!).
We are building the game using UDK and expect to finish it late 2013.
Popular Discussions View All (9)

Seems like Dream is going to take a lot more effort and time to complete.
DariusOne

Dream has been Greenlit and is now listed in the Steam store. For the latest information, purchase options, and discussions for Dream, please see it on the Steam Store or in the Steam Community.
Visit Store Page
For more details Visit Community Hub
For latest discussions
If you really, really want to, you can continue to the Greenlight page. Information on this page may be out of date, since all the action has moved to the areas noted above.