Greenlight > Games > Hojo Studio's Workshop
Greenlight is being retired. For more information on how to submit games to steam, refer to this blog post.
This item has been removed from the community because it violates Steam Community & Content Guidelines. It is only visible to you. If you believe your item has been removed by mistake, please contact Steam Support.
This item is incompatible with Greenlight. Please see the instructions page for reasons why this item might not work within Greenlight.
Current visibility: Hidden
This item will only be visible to you, admins, and anyone marked as a creator.
Current visibility: Friends-only
This item will only be visible in searches to you, your friends, and admins.
Inflatality
Description Discussions1 Announcements2 Comments154 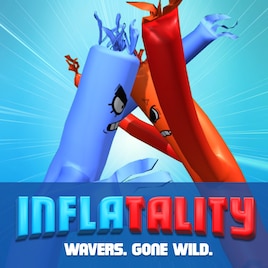 Hojo Studio
Offline
See all 40 collections (some may be hidden)

View Inflatality in the store

72 hours. That's all it took this incredible community to convince Steam to greenlight Inflatality. We're humbled, grateful and insanely excited - you're all amazing.

Over the coming weeks, we will be posting frequent updates to keep everyone in the loop on how the final steps of development are progressing - as well as a call for beta testers when we have a build we're happy to subject to rigorous, derpy evaluation!

For now, from Yosha, Rick, Jola, Arvin and Jiao we just want to say thank you for granting us this amazing opportunity. We will not let you down. LET'S GET READY TO FUMBLE!

The last 24 hours have been an amazing culmination of the past two years' development on Inflatality - with an overwhelming wave of passionate support from the Steam community.

From coverage across Kotaku and Gamespot to Nerdist and Unilad Gaming, we were absolutely not prepared for such a great response. We truly can't wait to get Inflatality onto Steam this year in all its derpy, flailing glory - but first, we got a Greenlight campaign to smash.

If you haven't already voted for us, we guarantee clicking Yes, and encouraging everyone you've ever known to do the same will make a huge difference. And if you don't think we're obsessively watching each and every vote tick up, then honey, you've never put a game on Greenlight :-)

We are deeply committed to engaging with everyone here over the next few months as the game nears release. We found 1000 new friends overnight - and we can't wait to get to know you all!

The definitive derpy multiplayer physics fighter featuring adorable inflatable wavers beating the crap out of each other is finally coming to Steam!
Find some friends, grab two controllers and get ready to fumble - the battle for ultimate inflatable supremacy is about to begin. Give your waver a unique look, name and skills, then prepare to fight across a range of hilarious battlegrounds with ludicrous waver weaponry and nothing but the wind and total elastic rage.

Features:
Dynamic fumblecore physics
Use deceptively simple twin stick controls to master the wind and your own momentum to flail your way to victory!

Devastating weaponry
Will you dominate with the Doom Hammer? The spinning terror of the Blade Bonnet? Call in a Hairstrike or unleash your Shockblock?

Four ridiculous battlegrounds
Do battle among the vehicles of Whiplash Motors, the crazed action of Demolition Derpy, The medieval ambiance of Hardly Faire, Murder on the dance floor at The Boum Boum Room or even the wedding chaos of Shazza's Special Day - all battlegrounds feature their own unique style and soundtrack![/list]

What happened?
Your cousin from Boston
< >
154 Comments

🌹YajanOciathien🌹 Jan 26, 2018 @ 10:54pm
Dare Game developer my team and I would like to review your game on our curation page linked below. We do not ask for anything but a copy of the game which you can send via curator direct. It's free and beneficial.
http://store.steampowered.com/curator/26170000/

Inflatality has been Greenlit and is now listed in the Steam store. For the latest information, purchase options, and discussions for Inflatality, please see it on the Steam Store or in the Steam Community.
Visit Store Page
For more details Visit Community Hub
For latest discussions
If you really, really want to, you can continue to the Greenlight page. Information on this page may be out of date, since all the action has moved to the areas noted above.