Store Page
ARK: Survival Evolved >  Workshop > Zachintosh's Workshop
This item has been removed from the community because it violates Steam Community & Content Guidelines. It is only visible to you. If you believe your item has been removed by mistake, please contact Steam Support.
This item is incompatible with ARK: Survival Evolved. Please see the instructions page for reasons why this item might not work within ARK: Survival Evolved.
Current visibility: Hidden
This item will only be visible to you, admins, and anyone marked as a creator.
Current visibility: Friends-only
This item will only be visible in searches to you, your friends, and admins. 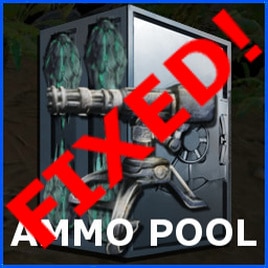 Zachintosh
Offline
See all 1217 collections (some may be hidden)

This item has been added to your Subscriptions. Some games will require you to relaunch them before the item will be downloaded.
Description
MOD ID: 925789347

Ammo Pool
Adds a structure that when placed can connect to nearby auto-turrets and feed them bullets as they need them! Control all of your turrets' settings from one place. Adjust their range, targeting, and warning time.

THIS WORKS WITH ALL MODDED AUTO-TURRETS. Including:
Joan's Sentry Turrets
S+ Auto Turrets
More Turrets & Turret Tools
Better Turret
Laser Turret
Ace's Heavy Turret
And all mods with an auto-turret of any kind - Any mod based on the regular vanilla auto turret.

Mod ID
Right click somewhere on the page. Select "Copy Page URL." Paste the URL somewhere and find the number at (or towards) the end of the URL. That's the mod ID. :)

Support Me / Join Our Community
If you like the mod, upvoting is great way to support me! :)

I am also a leader in one of the most AMAZING Ark communities! I've never met a group of more ridiculous, fun players. Come check it out! Join our Discord: 100 Year War Discord[discord.gg]

Spawn Code
Use this code to spawn in an Ammo Pool:

Step 2: Open the radial menu by holding 'E' and then select "Connect to Turrets". This will automatically connect it to any turrets in range. You do not have to do anything to the turrets themselves. If they successfully connect, you will see a blue ring around each turret that connected. The ring will disappear after a few seconds.

You can adjust the ammo cap through the radial menu on the Ammo Pool, up or down by 50 at a time. It can go up to 50,000. You can also still manually put bullets into the turret if you want to go above the cap.

View Range
This option is also on the radial menu. If you select it, a sphere will appear that shows how far the Ammo Pool reaches. It will disappear after 15 seconds.

Activate Turrets
Also on the radial menu, this will turn on any connected turrets that have power. This is to make it easy to turn all your turrets back on if they get shut down, your generator quits, or a sandstorm blows through. There currently isn't an option to turn them all off at the same time.

Change AP Range
This adjusts the range of your AP between low, medium, and high. Medium is the default.

Inventory Slots
The AP has 150 slots in it's inventory. On vanilla Ark, this means you can store up to 7,500 bullets - much, much more if you have a stacks mod.

Visual Cues
Each time a bullet is sent out from the Ammo Pool, the sides of the structures will blink orange. When a turret receives a bullet, an orange circle will blink around it (looks like the blue ring when you're connecting turrets).

Ammo Dispensing Rate
Ammo dispenses from the Ammo Pool at the same rate as the turrets fire (every half second). Additionally, it will distribute one bullet to every connected turret (that is below the ammo cap) at the same time. This means if you have 8 turrets connected and all 8 need bullets, all 8 will receive a bullet every half-second. This allows the turrets to all keep firing and it distributes the ammo evenly to whichever turrets need it.

Advertising your server
Please post your server advertisements in the "Servers with this mod" discussion under this mods discussion threads. Posts in the comments on this page will be removed.

Donations to the 100 Year War Community
We've had a near-overwhelming number of people ask if they can contribute to continue seeing our community grow and expand, so we opened up a Patreon just for that purpose! This helps us pay for the server so we can focus on modding, and if given enough support, expand the server and community even more. We won't ask or push anyone to donate - we don't fly that way - but if you would like to, here you go!

If you would like to look into joining our crazy awesome community, here's the Discord link:

Wessel Jan 17 @ 10:29am
is the mod fixed where you could change other tribes their turrets?

Devel ( Blood of a Lion) Jan 13 @ 2:25am
hi, where can i find the ini file of the mod. so that I can take a look. that's just private and curiosity. so please don't worry

Ansgar Odinson Jan 28, 2021 @ 4:20am
Does this mod still work? Does it work with S+ turrets? I saw someone reporting a problem with it not working on platforms, does that issue remain or was it fixed?