Greenlight > Games > Rocket Jump's Workshop
Greenlight is being retired. For more information on how to submit games to steam, refer to this blog post.
This item has been removed from the community because it violates Steam Community & Content Guidelines. It is only visible to you. If you believe your item has been removed by mistake, please contact Steam Support.
This item is incompatible with Greenlight. Please see the instructions page for reasons why this item might not work within Greenlight.
Current visibility: Hidden
This item will only be visible to you, admins, and anyone marked as a creator.
Current visibility: Friends-only
This item will only be visible in searches to you, your friends, and admins.
Major Mayhem
Description Discussions6 Announcements6 Comments525 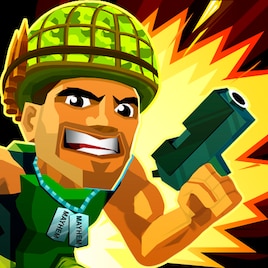 Rocket Jump
Offline
See all 58 collections (some may be hidden)

View Major Mayhem in the store

We've been approved for release and have a release date of Feb 24, 2014! We'll also be releasing with a discount of 20%! Major Mayhem is now visible on the store in the Coming Soon section. Thanks to all who made this possible by voting for us on Steam Greenlight.

After receiving a lot of feedback from our greenlight voters right here on Steam, we have decided to release the Steam version of Major Mayhem for $4.99 and there will be no In App Purchases.

We're going to try and get Major Mayhem released on Steam in late January 2014. But as this is our first Steam release we are not sure what the process is and exactly how long it will take to integrate with Steam leaderboards, Achievements and Steam Cloud etc, so this date may change.

Thanks a lot for your feedback and support. We will continue to listen and adapt to your requests and suggestions.

Try it on Android, iOS and Mac/PC (on Desura)

He's got an itchy trigger finger, some scratchy stubble, and a fondness for shooting dudes in the face. Run and gun your way through gorgeous 3D environments as you embark on a mission to rescue your kidnapped girlfriend from the Forces of Evil. Guns, grenades and an assortment of other tools of destruction are at your disposal, and you'll need every last one of 'em. So what are you waiting for, Major Mayhem? The future of the Free World -- and your love life -- hangs in the balance.

Features
- 45 levels of non-stop action
- Battle your way past hordes of enemies in three picturesque environments: Tropics, Metropolis and Desert
- Steam enabled leaderboards, compete with your friends!
- 100 Steam enabled achievements to earn and collect!
- 150 Mission objectives (mini achievements). For extended gameplay.
- Heaps of costumes and hats for the Major.
- Loads of weapons in your arsenal to deal out MAJOR MAYHEM, like:
-- Automatic Shotgun
-- Minigun
-- Quadzooka (like a Bazooka only more massive-er!)
-- Plasma Rifle
-- And more!
- And All new power ups!
-- Air Strikes!
-- Robo Mayhem
-- Super Ammo
-- And more!
- Save the world, and your girlfriend

FAQ's
Steam Pricing?
We will initially launch for free on Steam for a weekend or maybe a week and see how it goes. Depending on how well in app purchases perform we will try and keep it free. If enough users purchase in app purchases to support us then we can continue to leave it free, add to Major Mayhem and create more free games in the future for all to enjoy! :)

PC, Mac, Linux?
PC and Mac are currently supported.
Linux? Unity (our game engine) is planned to support Linux in the near future which means we will as well!

Who are we?
We, Rocket Jump, are the developer of Major Mayhem. We are a small indie studio consisting of just 2 people, 1 coder, 1 artist. We both worked together before we went indie and both had major rolls in creating {LINK REMOVED}Shatter for PC and PSN in 2009/2010.

About Major Mayhem's Development.
Major Mayhem was built in Unity and designed to run on all platforms. We initially released on iOS and got a lot of good reviews and also a lot of feedback as to what our players wanted in the game. We then spent another 6 months developing the title, adding loads of new guns, costumes and game modes to make all our players even happier. Along with the huge v2.0 update we released on Android we also went free to expand our audience as big as we could get it, supported by (non mandatory) in app purchases.

Will it be integrated with Steam?
Major Mayhem will be enhanced with Steam adding Steam Leaderboards, Steam Achievements and Steam Cloud.

The Future?
Our ears are always open for new ideas and suggestions that we will happily add to Major Mayhem for free and/or add to a sequel in the future. We encourage everyone to get involved and follow our {LINK REMOVED}Facebook page as that's the best place for us to get feedback from you all.

With your support we can get on Steam and make Major Mayhem even better for everyone!

Thanks,
Ants, from Rocket Jump.

Press Quotes
"This is slaughter done right, with enormous weaponry and a huge sense of fun." -PocketGamer

"Major Mayhem is one of the best rail shooters on the App Store." -IGN

"Bring[s] back memories of such games as Lethal Enforcers and Virtua Cop, or even more recent fare such as the Resident Evil Chronicles games for the Wii, though without being quite as serious as any of those." -Slide to Play
< >
525 Comments

Major Mayhem has been Greenlit and is now listed in the Steam store. For the latest information, purchase options, and discussions for Major Mayhem, please see it on the Steam Store or in the Steam Community.
Visit Store Page
For more details Visit Community Hub
For latest discussions
If you really, really want to, you can continue to the Greenlight page. Information on this page may be out of date, since all the action has moved to the areas noted above.