Greenlight > Games > Artifice Studio's Workshop
Greenlight is being retired. For more information on how to submit games to steam, refer to this blog post.
This item has been removed from the community because it violates Steam Community & Content Guidelines. It is only visible to you. If you believe your item has been removed by mistake, please contact Steam Support.
This item is incompatible with Greenlight. Please see the instructions page for reasons why this item might not work within Greenlight.
Current visibility: Hidden
This item will only be visible to you, admins, and anyone marked as a creator.
Current visibility: Friends-only
This item will only be visible in searches to you, your friends, and admins.
Sang-Froid : Tales of Werewolves
Description Discussions14 Announcements5 Comments1765 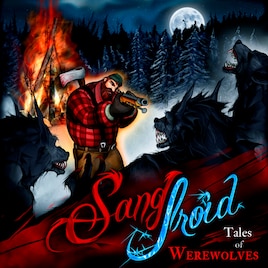 Artifice Studio
Offline
See all 110 collections (some may be hidden)

View Sang-Froid : Tales of Werewolves in the store

Hey everyone!
Today is the big day! Sang-Froid will be LIVE on Steam at 1pm EST! You will be able to pre-purchase the game to get immediate access to its BETA! Sound good? Here's a new trailer to spice things up : http://www.youtube.com/watch?v=ZMSDuQiiaDw&hd=1 !

We are still working through some things for this to happen, but if all goes well, we'll have a "pre-order now and download the beta" starting Feb, 22nd. This way, for those of you who can't wait anymore, you'll be able to play Sang-Froid ( the Beta is the full release you know ;) ), also you'll be able to provide us with feedback to help fine tune the game before the final release! Thanks again for your support!

Read More
Description
Release date: APRIL 5th
Combining action and strategy in a unique way, Sang-Froid: Tales of Werewolves transports you into an epic folktale co-written with best-selling Canadian author Bryan Perro (Amos Daragon, Wariwulf), in which two feuding brothers will have to put aside their differences to save their sister, who is pursued by the Devil himself!

This time however, sheer brute strength won't be enough to save the day as your enemies are way stronger than you are. Only your wits and the ability to combine ingenious traps to setup deadly ambushes will give you a chance to see the sun rise again on your frozen piece of forest...

Hello everyone! We just wanted to give you a quick update!
First of all, to answer some of your main questions:

What does Sang-Froid mean?
Sang-Froid is actually both a french and an english term, which means "self-possession or imperturbability especially under strain". In our game, you actually have to stay calm during combat and make good use of the different mechanics (such as the Fear Factor) in order to survive.

Why are there 2 brothers if the game is only single-player?
We don't want to "spoil" or give away too much info about the story, but let's just say that when you'll play the game, you'll understand why we needed 2 brothers to tell our story (it is a tale of werewolves after all) ;)

Finally, to thank you all for the support, we are "upgrading" our contest!
To show our appreciation to our faithful community, we decided to make our "Free Game Contest" even more cool by adding, in addition to the 25 free copies of Sang-Froid already announced, a 1:1 replica of Antoine St-Crapaud's magic axe, courtesy of "Les Ateliers Nemesis". This axe is the ULTIMATE collectors item and every true Sang-Froid fan should be ready to fight to the death to win it (we ourselves fought amongst each other until we learned we were not elligible for the contest...)!
www.sangfroidgame.com/contest

Updates on our progress on Greenlight
Artifice Studio

Congratulations! Greenlight was a success!
soh_cah_toa

The_Engineer Jul 31, 2014 @ 6:26am
It would most likely be a fun game, but it has not got anything from me other than my hate - I am only at day two, but the never ending, mindless, no good for nothing cutscenes and non skip able tutorials, have made me delete this game. Despite I do like to know, how things actually work in the game, I do not want to be treated like some 6th grade kid.

Sang-Froid : Tales of Werewolves has been Greenlit and is now listed in the Steam store. For the latest information, purchase options, and discussions for Sang-Froid : Tales of Werewolves, please see it on the Steam Store or in the Steam Community.
Visit Store Page
For more details Visit Community Hub
For latest discussions
If you really, really want to, you can continue to the Greenlight page. Information on this page may be out of date, since all the action has moved to the areas noted above.