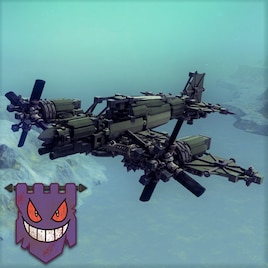 This item has been added to your Subscriptions. Some games will require you to relaunch them before the item will be downloaded.
In 2 collections by Brooka
Brooka's Toybox

This aircraft is a variable pitch vanilla aircraft. It's a toned down version of my Viper, it's a bit more armed and faster than the Warbird. Armed with two cannons, four bombs, features RTC controls, ice-proof construction and a suspended under-carriage.

Would really appreciate a rating, thanks in advance <3

Controls:
Up, Down, Left and Right Keys: For Inverted Flight Controls
T,F,G,H Keys: For One-Handed Flight
Q/E or R/Y: Controls yaw
L shift: Toggle thrust
Z and X keys: Controls the pitch of the propellers, in their default position the blades do not provide much speed, pressing Z will change the angle of pitch and generate much more thrust.
C keys: Cannons
N and M: Raise or lower landing gear
1-4: Release bombs
Mouse click for camera views.

This plane appears in Isaac Bever's new vid, so thanks to him for showing it off!

Of course totally vanilla, no mods or bsg editing, if you want more vanilla builds check out my workshop ;D
Getting a bit tired of people calling my machines "not vanilla," watch this video, if you don't believe me, some of the techniques used in the video were used to build this plane. No mods used = vanilla.

Actually Is Dolan May 9, 2017 @ 1:28pm
how did you stacked the motor wheels for the engine so close to each other without mods?

therealsemechki May 8, 2017 @ 10:19pm
@HamsterIII: Honestly, you wouldn't believe how many people argue over how to pitch on a plane, and half the planes are down key is to go up, and the other half are vice-versa. Moral of the story: Get used to it or stop complaining and change the thing itself.
< >