Greenlight > Games > H-GAME's Workshop
Greenlight is being retired. For more information on how to submit games to steam, refer to this blog post.
This item has been removed from the community because it violates Steam Community & Content Guidelines. It is only visible to you. If you believe your item has been removed by mistake, please contact Steam Support.
This item is incompatible with Greenlight. Please see the instructions page for reasons why this item might not work within Greenlight.
Current visibility: Hidden
This item will only be visible to you, admins, and anyone marked as a creator.
Current visibility: Friends-only
This item will only be visible in searches to you, your friends, and admins.
Renèle and Armor of Devil
Description Discussions0 Announcements1 Comments43 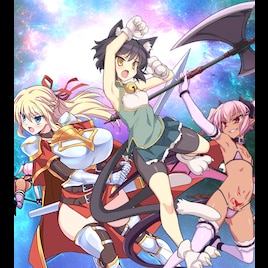 I am a Japanese who likes animation. I draw illustrations.
"Renèle and Armor of Devil" is a new RPG.
The previous "sweet fantasy story" seems to take time to produce yet.
The event illustration is about 20 pieces.
If I can solve the technical problem, I also think of H patch.

Faith… If the God of salvation from the darkness of the abyss upcoming?......
The belief spreads over the world?......

It was formed in the original prophecy priests to hear the word of God, Urus Holy Knights.
Knight belonging to there, the world by the villages and the city of lords had been mentioned together.

However on the other hand, Urus Knights treats the prophecy of God is as absolute as the God of prophecy,
execute to destroy a city without hesitation.

The young owner of Clant village, Renele also was one of such Holy Knights.
Renele is entrusted with Clant village from his father, his father went to a new land to create and develop a Zest Village.

So, while questioning the way of their own belongs Urus Holy Knights?...?.

One day, three dungeons around the village Kuranto appeared suddenly?......
Renele, in order to wipe the anxiety of residents "Do monster does not come hit",
has an adventure to the dungeons?...?.

On the other hand, almost at the same time, in the world of Strict Red Devil World, so that one princess of the Nightmare

devil, Mikyuna woke up?......
Strict Red Devil World is one of the world that exists in the universe, it's called the Devil World.

When the two people, Renele met Mikyuna, meet each other, the world's?......?No,
And it would be approaching the encounter of the secret that was created in the universe, yet nobody was no way of knowing at

Mikyuna
Species : Nightmare Devil (Succubus)
Age: 1526
Height: 145cm Weight: 48kg (including the feathers) Measurements: B70 (AA Cup) W 50 H 78
Weapon: Ax, Cane
Maxim: I, will take over from my mother and become the Devil King of Red Strict Devil World. I will show it to you!

It's around the three people, Renele, Mikyuna, Olive
Majestic and bewitching story over the human world, Devil World and space!

When the secret of the Encounter of the universe begins to be revealed?......
Devil and man and God, either really correct is, you are going to be surely suffer?......

"Apart from this, there's one more strange thing seems to be cursed…"
"That one more curse is that the shape of armor will be change from time to time…"
"That shape will fit the wearer and make the wearer embarrassed."
" What?!"
" Noooooo!!! That's such a bad taste!! As a holy knight shouldn't be like this!!"

A system to create a village by imagination!

With the permission of the residents, you can build a new building!
Approval Congress!

To resolve the request of village residents!
Guild!

Some relaxation once in a while!
Casino!

Apple May 9, 2017 @ 9:18pm
You shelled out all that money for the CGI art but couldn't be bothered to use anything other than the default RPG crap??

Princess Nora May 9, 2017 @ 2:31pm
we are in 2017 and still this shit games in steam no thank you and im not heloing developers for like this crap games i put more then 5000$ to build my pc trash games
any way sorry for the hate