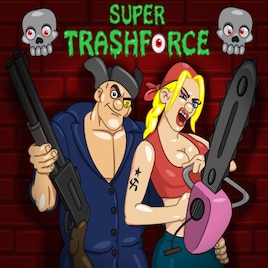 Siberian Digital
Offline
Thanks for your support!

The near future. The world was flooded with waste from factories. Over time, almost all the land is bogged down in the waste. All garbage and chemicals were able to reach even to hell itself. Satan did not like it very much and he sent his creations to the ground in order to destroy all people for this garbage.

It got to the point that even ancient civilizations were awakened from all this stench and decided to destroy humanity.
But the defense of the Earth stood brave soldiers, forming a squad of Trashforce.

Game features:
* More than 10 unique characters with unique characteristics;
* 5 Different cards with unique enemies for each one;
* More than 20 kinds of different weapons. Starting with a shotgun, ending with shooting a fish;
* 4 game modes
- Normal Game - classic survival in the arena. Here you can earn gold skulls for the discovery of new characters;
- Boss Survival - the same survival, only here there will be only bosses;
- The last one is to defend the tower. Here you build a small base, hire wars and fight off the waves of opponents;
- Suicide Survival is the same survival, but more difficult. This is a real challenge for experienced players. On the map, bonuses do not appear at all, and enemies are more aggressive. For all this you will get double points;
* Lots of humor and fun
< >
20 Comments

The GDWC May 8, 2017 @ 5:50am
This may be great. I'm not personally sold on the cartoony style mixed with the pixel graphics, but the gameplay seems great.