Store Page
RimWorld>  Workshop > jecrell's Workshop
This item has been removed from the community because it violates Steam Community & Content Guidelines. It is only visible to you. If you believe your item has been removed by mistake, please contact Steam Support.
This item is incompatible with RimWorld. Please see the instructions page for reasons why this item might not work within RimWorld.
Current visibility: Hidden
This item will only be visible to you, admins, and anyone marked as a creator.
Current visibility: Friends-only
This item will only be visible in searches to you, your friends, and admins. 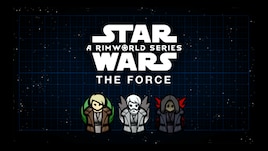 This item has been added to your Subscriptions. Some games will require you to relaunch them before the item will be downloaded.
In 1 collection by jecrell
Star Wars - A RimWorld Series

::::: NOTICE :::::
::::: LOAD ORDER ::::::
Star Wars mods need to go below JecsTools.
Putting Cults below The Force fixes alignment issues.
Thanks to Jedi Master Ailan for his direction and inspiration in the creation of this mod. Without his help and support this would have never happened.

Quick start notes:
For a character to gain force powers, they must start with the force sensitive trait. After spending time working, they will discover their force powers through gaining force XP. Low level force powers can be used by both dark and light sides of the force. Penultimate powers are restricted for pure dark or pure light force wielders.

Characters unable to return to light/dark after using too many abilities of other side
ToyWalrus
< >
1,476 Comments

WOO_CORN_BLUE Mar 14, 2021 @ 7:02am
hello there jecrell xen harrixson and erdelf i love ur mod so much ,but it thing u mod need add saber throw force freeze jedi spirit and more then more force power !