Greenlight > Games > Red Wasp Design's Workshop
Greenlight is being retired. For more information on how to submit games to steam, refer to this blog post.
This item has been removed from the community because it violates Steam Community & Content Guidelines. It is only visible to you. If you believe your item has been removed by mistake, please contact Steam Support.
This item is incompatible with Greenlight. Please see the instructions page for reasons why this item might not work within Greenlight.
Current visibility: Hidden
This item will only be visible to you, admins, and anyone marked as a creator.
Current visibility: Friends-only
This item will only be visible in searches to you, your friends, and admins.
Call of Cthulhu: The Wasted Land
Description Discussions1 Announcements9 Comments857 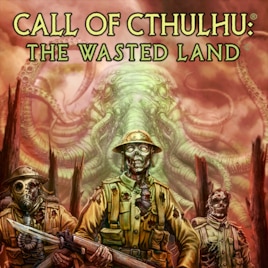 View Call of Cthulhu: The Wasted Land in the store

The multi-award winning World War 1 strategy RPG launches today on Steam for PC. The critically acclaimed title originally launched on mobile and PC in 2012. The title successfully passed Steam’s Greenlight process and now arrives as a fully-fledged game on Steam. The Steam launch includes updated graphics and the bonus DLC “Kaul's Dairy”, which had previously only been available on iOS and is priced at $5.

The game features 14 levels set in the trenches of World War One. The player controls a team of up to six investigators charged with uncovering a deadly inhuman conspiracy underlying the clash of empires of the Great War. Barbed wire, mustard gas and machines guns will prove to be the least dangerous challenges the investigators encounter as they venture into no man's land to solve the mystery of the Wasted Land. As the game progresses, the player must build up the team's skills, weapons and equipment to counter the rising tide of darkness. As well as the physical danger, the investigators must guard their sanity against myriad horrors that threaten to destroy them.

Join us in the Wasted Land on Steam!

Thanks again! Cthulhu blesses you!

Based on the award winning Call of Cthulhu RPG, this turn-based strategy/role-playing game is set in the midst of World War One and pits a team of investigators and soldiers against an ancient evil. This enemy, older than humanity itself, is using the carnage of the great war to build a reanimated army deep beneath the bloody battlefields of Europe.

"Many men have related hideous things... which happened on the battlefields of the Great War. Some of these things have made me faint, others have convulsed me with devastating nausea, while still others have made me tremble and look behind me in the dark..." H.P.Lovecraft 'Herbert West: Reanimator'

Call of Cthulhu was originally the title of a novella by cult American horror writer H.P. Lovecraft (1890–1937) which has, since it was published in 1928, captured the imagination of generation after generation of fans. Lovecraft’s works also inspired an award winning role-playing game, Call of Cthulhu. It is this classic pen'n'paper RPG combined with inspiration from Lovecraft's fiction including the classic WW1 set 'Herbert West: Reanimator' that together forms the basis for ‘Call of Cthulhu: The Wasted Land’. From this basis we've then layered in tactical gameplay, multiple characters, skills, authentic period weapons and equipment, sanity system and other features such as magic, poison gas and artillery.

“Joyously thoughtful…” PC Advisor
“..you MUST download today...Awesome...” Guardian
“I was totally addicted to this game for weeks...” Wired
“This game is worth your time if you like a good story and RPGs...9/10.” Koku Gamer
“Stunningly complex turn-by-turn strategy-based SIM...5/5" T3 Magazine
“...surprisingly deep and fun turn based strategy game...” Capsule Computers
“...isometric turn-based combat at its finest…” Mobot
“Lovecraft would be proud.” Live for Films

Help us vote Cthulhu onto Steam by sharing this quick link: {LINK REMOVED}bit.ly/steamcthulhu

Steam discussion group for the game (and Cthulhu, Lovecraft stuff in general) is here - join us!

abbottsinn Jul 22, 2015 @ 6:50pm
I am pissed I can't get into the game. I have played this game many hours. Now it says that there are missing files. This is bullshit and I'm pissed. Three hours I have tried to get into this game. I need help can anyone help me.

Call of Cthulhu: The Wasted Land has been Greenlit and is now listed in the Steam store. For the latest information, purchase options, and discussions for Call of Cthulhu: The Wasted Land, please see it on the Steam Store or in the Steam Community.
Visit Store Page
For more details Visit Community Hub
For latest discussions
If you really, really want to, you can continue to the Greenlight page. Information on this page may be out of date, since all the action has moved to the areas noted above.