Greenlight > Games > Estudio Ábrego's Workshop
Greenlight is being retired. For more information on how to submit games to steam, refer to this blog post.
This item has been removed from the community because it violates Steam Community & Content Guidelines. It is only visible to you. If you believe your item has been removed by mistake, please contact Steam Support.
This item is incompatible with Greenlight. Please see the instructions page for reasons why this item might not work within Greenlight.
Current visibility: Hidden
This item will only be visible to you, admins, and anyone marked as a creator.
Current visibility: Friends-only
This item will only be visible in searches to you, your friends, and admins.
Noahmund
Description Discussions0 Announcements7 Comments62 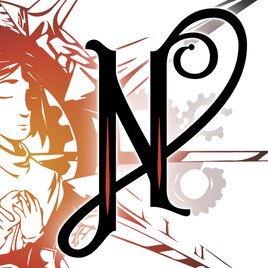 View Noahmund in the store

From Estudio Ábrego, we are happy to announce that Noahmund has been selected for Square Enix Collective. It’s a pride that a big company inside of the video game industry like Square Enix give us support. Thanks to them, Noahmund can be present on their indie video game platform.

During 28 days, from 19th March to 15th April, you can vote for Noahmund to be one of the games selected for the platform. If our RPG is chosen for the community, Estudio Ábrego and Noahmund will have worldwide visibility.

We remind you than Noahmund release on Steam (Windows and Mac) is planned late this spring. PS4 version will be available, thanks to the III Edition of PlayStation®Games Camp, next winter, in physical format and digital format through PS Store.

You can vote for Noahmund on Square Enix Collective here [collective.square-enix.com]. 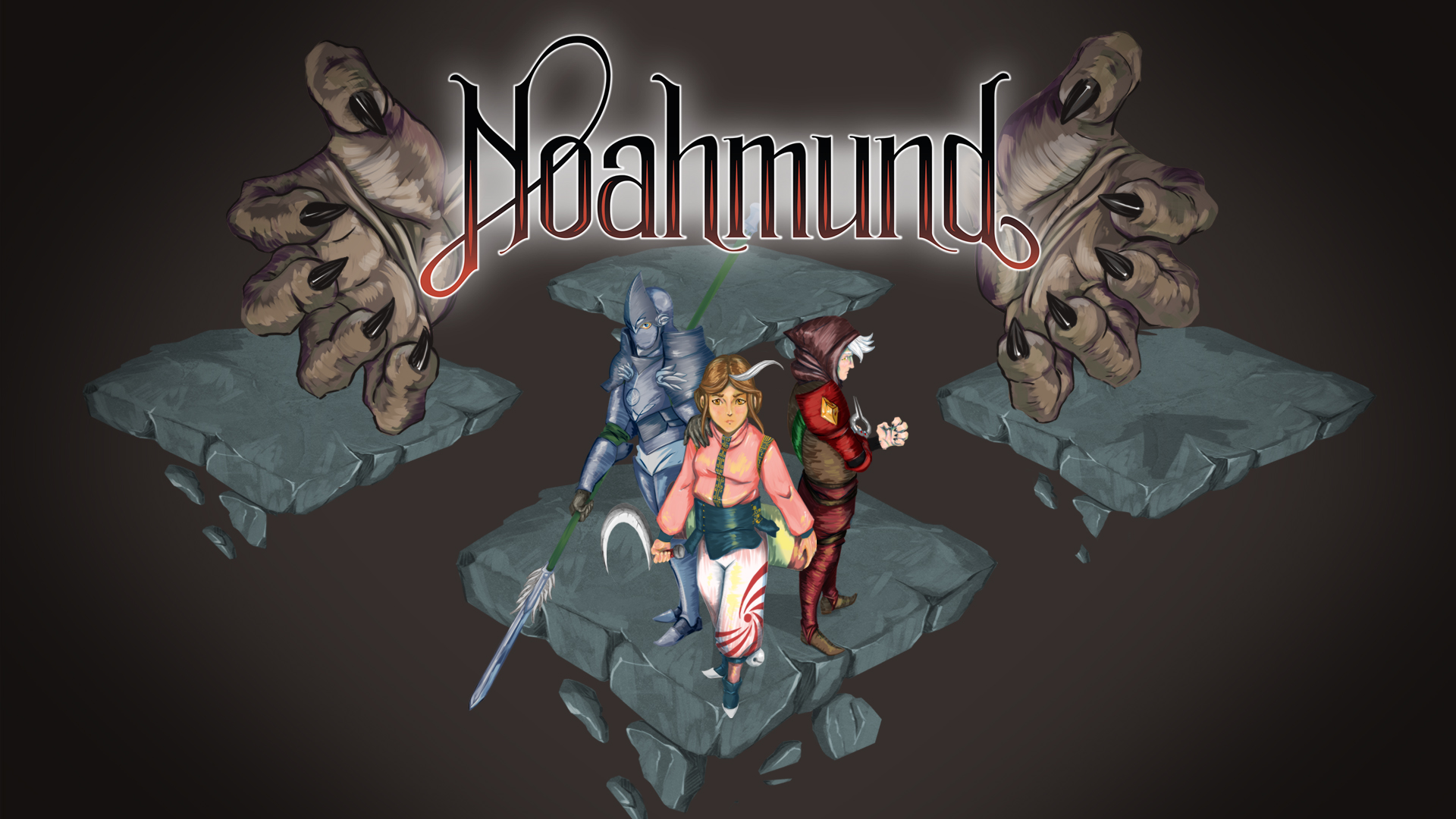 After a long time working on Noahmund's big change, we present you its first public demo, we hope you like it. Do not forget to fill out the survey once you finish it!

You can download the demo at the following link:

Read More
Description
Release date: Q1 2018
Love, fear, fire… The war in Feros is only a dramatic painting drawn on the background of the fate of Galina Angstroud, an agent of Shinn willing to fight against the most powerful weapon of Salaber. Accompanied by her guardian, Berani Valenti, both begin a journey for truth and salvation.

Noahmund is a role playing video game that wants to bring new horizons on battle systems and exploration. We´re going to launch in Steam on Spring 2018 for Windows/Mac, and PS4 on Winter Christmas campaign.

We have moved the idea of chess and tactical role-playing games and we have equipped it with action and speed, baptizing this system as Motion Battle Chess. Our main characters have three different branches of skills that thanks to the Shatranj figurines are able to change their effect and power, giving much more depth to the combat.
But this is not the only way to fighting on Motion Battle Chess. Each characters have unique basic actions that determinate players’ playstyle.

The main mechanic for the exploration system is based on a classic board game like HeroQuest or Dungeons and Dragons. Players will be able to explore the different zones of the game through nodes and resolve different puzzles thanks to the world skills for each main character.

One of the exploration system submechanics is the world trap minigame, players will have to deactivate traps pushing keys/buttons through a quick time event.

There are two ways of failing this mechanic:


If the player fails, characters will take damage and maybe an altered state depending on the difficulty of the trap itself.

Many years ago, the war of water and fire began in Feros. The northern regions controlled the underground rivers that supplied water to the entire continent, but the southern lands were punished by drought and heat. This was the main reason for their struggle, but in the end, the beliefs of its inhabitants became stronger than thirst.

Feros was then divided, and those who agreed to keep investigating Synchrony, crossed the natural border of Bismut pass to the north, land of rivers and mountains. At that time, in the south began a cult for the drivos, dangerous creatures able to spit destructive flares. The fanatics called themselves the Drivanian and founded Salaber in the south.

Synchrony was branded as heresy from the cult and tensions began. Those who studied it were called adepts, but to their disgrace many of them were killed by the Salaber army. The tensions grew so much that the war broke out across the continent, destroying cities in its path that only remain in the memory and written history of Feros.

It is 570, the war of fire and water has continued its course, but months ago, Salaber released a powerful weapon from the top of the Bismut pass which almost destroyed the entire continent with its titanic rain of fire. Now, the ashes of war that are still burning are trying to be revived and extinguished alike.

Shinn, the capital of Barfa Rali in the north, sends Galina Angstroud as an agent to discover the truth about the rumors of a new use of that terrible weapon. Accompanied by her guardian, Berani Valenti, Urion's second heir, both follow the trail of one of the generals of the Salaber army. 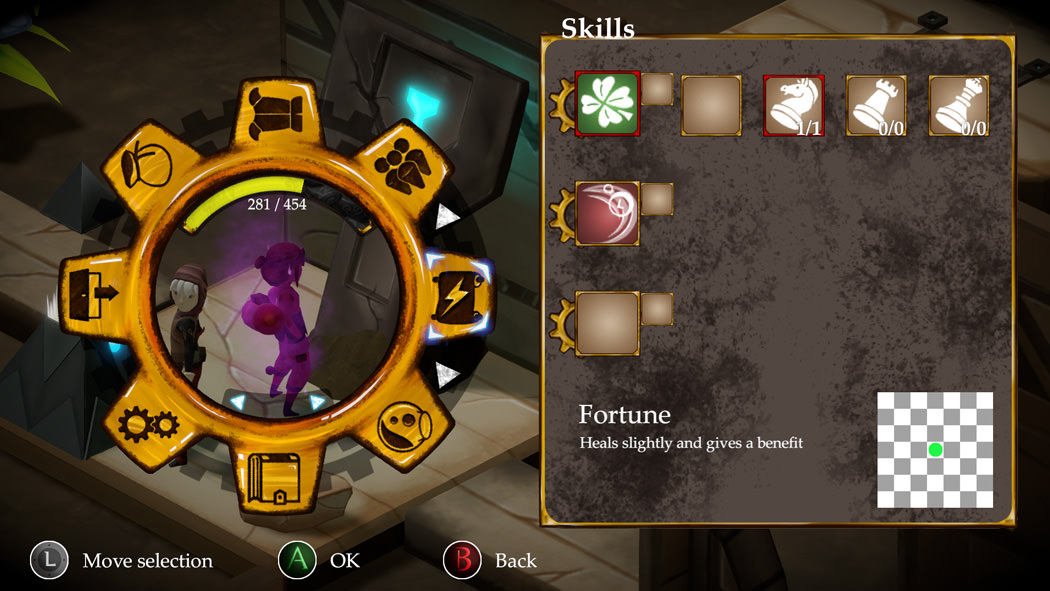 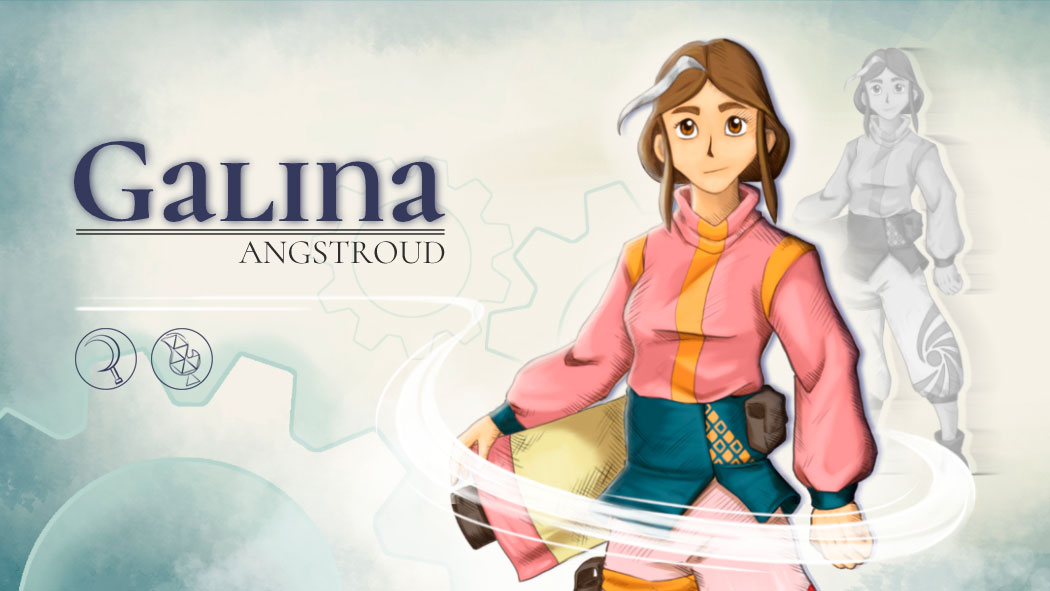 She's a synchrony adept from Shinn's temple. Although she is a smart one, is a very insecure girl who doesn't like to fight. When she's by herself, guilt comes to her heart. 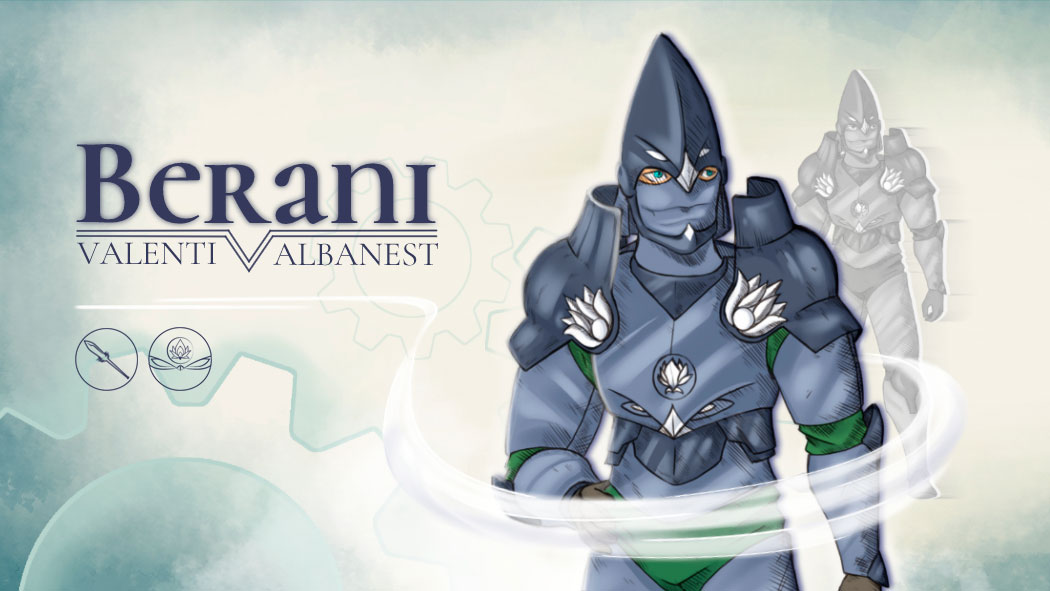 "From now on, and until death take its decision, I will be your guardian".

He's the second heir of Urion's throne, a guardian from Shinn's temple with a golden heart and strong principles. He's a forgetful and innocent one, an easy target to manipulate. 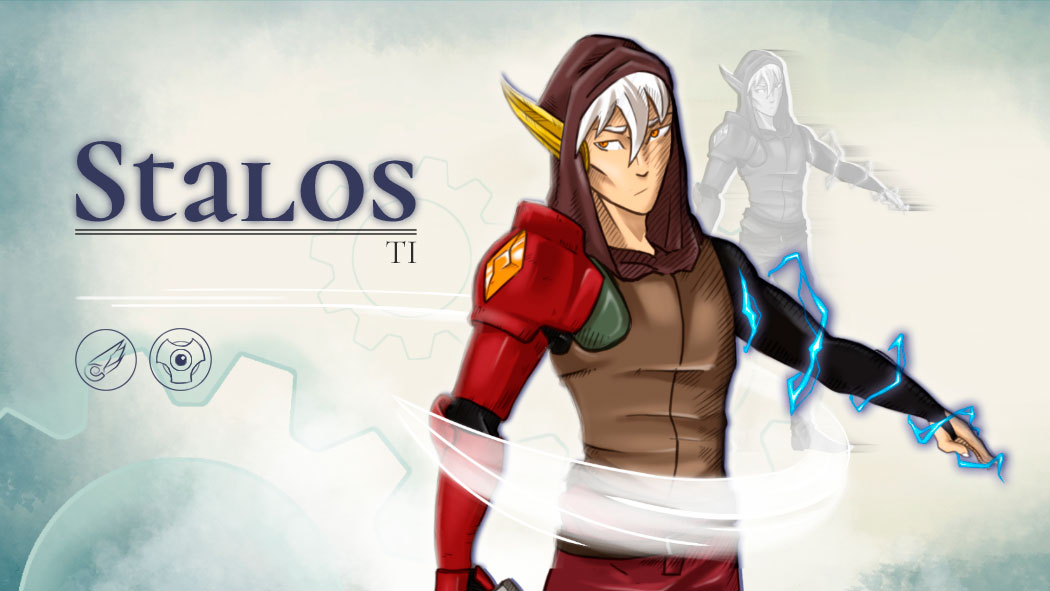 "I couldn't care less for your war".

A very mysterious character, hermetic and too arrogant, always keeping a low profile. He has the strange power to speak to thunder, earth and wind.

The art of Noahmund is inspired by japanese aesthetics, and influenced by manga and anime, while keeping its own and singular style, achieving a very personal vision as a result.

The characters 3D models are based on a chibi style with oversized heads, a nostalgia reminiscent of the (nineties) yet up to date with modern techniques, additionally these characters have handpainted textures that help to establish their personality.

The final result is a singular view into the world of Noahmund, maximizing the personality of its universe, mythology and characters, an art that try to innovate in the conception of its different influences. 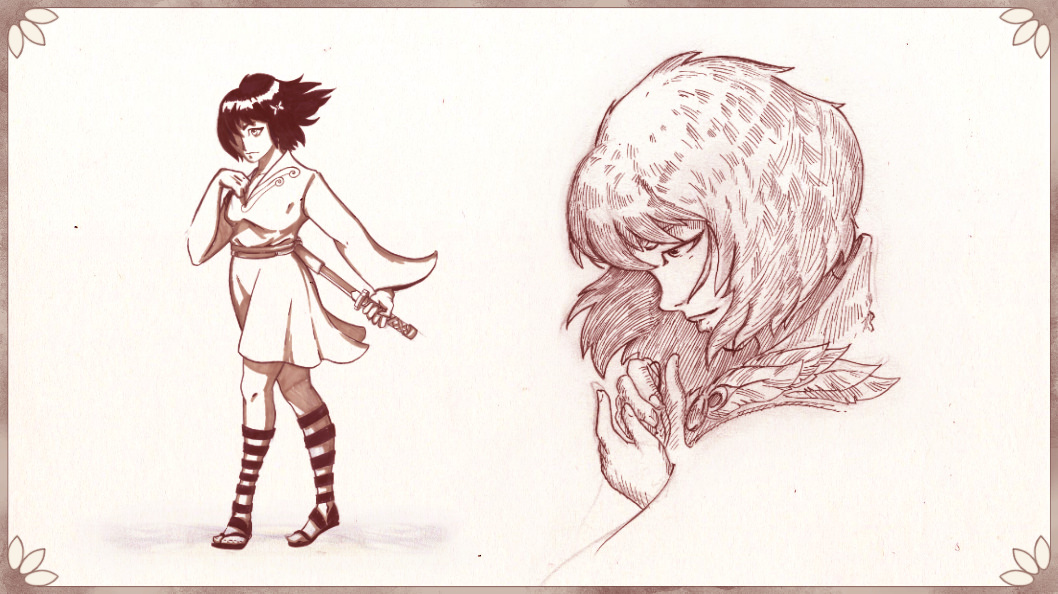 Noahmund is being created by a team of thirteen professionals. We’ve been working on this first project for a year and we’re near the end of the main production part. We’re a hardworking team and we want to share a great experience with the community, we want you to feel every bit of Noahmund with your eyes, your ears and your hands.

Noahmund has got two awards so far, “Best Audio” at Gamepolis 2016 and “Special Jury Award” at Gamepolis 2K17, given by Gordon Walton, one of the most recognized developers around the world.

But for all of that, we need your help! We’re indies and we need your feedback to improve our skills and our game, so please, be welcome to download our demo. Don’t forget to share it and to write your suggestions through here or by email.

You can find more about us and about the game on our webs:

sarannar May 22, 2017 @ 1:43am
I tried a demo and it was really amazing. The battle system is fun and simple to learn, but hard to dominate. Expecting the game! Congratulation.

Noahmund has been Greenlit and is now listed in the Steam store. For the latest information, purchase options, and discussions for Noahmund, please see it on the Steam Store or in the Steam Community.
Visit Store Page
For more details Visit Community Hub
For latest discussions
If you really, really want to, you can continue to the Greenlight page. Information on this page may be out of date, since all the action has moved to the areas noted above.