Greenlight > Games > Wolod's Workshop
Greenlight is being retired. For more information on how to submit games to steam, refer to this blog post.
This item has been removed from the community because it violates Steam Community & Content Guidelines. It is only visible to you. If you believe your item has been removed by mistake, please contact Steam Support.
This item is incompatible with Greenlight. Please see the instructions page for reasons why this item might not work within Greenlight.
Current visibility: Hidden
This item will only be visible to you, admins, and anyone marked as a creator.
Current visibility: Friends-only
This item will only be visible in searches to you, your friends, and admins.
NSI: Operation Zero
Description Discussions1 Announcements2 Comments147 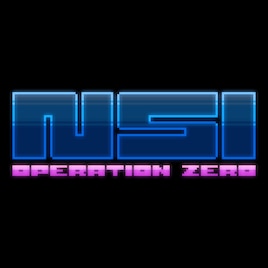 Wolod
Offline
See all 3 collections (some may be hidden)
Recent Announcements View All (2)
Greenlit at last!
May 23, 2017 - Wolod

NSI: Operation Zero has been successfully greenlit! Now I just need to finish developing it. Hope you'll enjoy it after the release and thank you all for your support!

Let's talk about some interesting gameplay mechanics. I'll try to cover this subject fairly comprehensively in this article.

If you can't outgun them, you should outsmart them!
Usually frontal assault will end up with your death. You're not a superhero capable to soak up tons of bullets, but neither are most of your enemies. Sneak behind their backs and take'em out one by one. And don't forget about friendly fire. Use it for your advantage.

Increasing the odds of survival
You'll have to engage your enemies in direct combat sooner or later. Luckily your character has few tricks up his sleeve.

Dodge roll is invaluable if you want to evade enemy's fire.

Combat stimulators boost your reflexes to the inhuman limits. As a result you may experience a so-called "time-bending" effect.

I've never asked for this
You'll be able to upgrade your character with different implants. Also hacking various consoles is required to traverse through levels. It's cyberpunk game after all.

That's enough information for now I guess. If you have any questions feel free to ask them. I'll be waiting for your feedback.

Thanks for your attention and until next time farewell.
Read More
Description
Release date: Summer 2017
About the Game
NSI: Operation Zero is an action platformer with stealth elements set in a cyberpunk world of the near future.

He who controls the information controls the world. We all live in time of the tough competition. And here, at NSI, we understand it like nobody else. It's hard to imagine modern big business without the industrial espionage and sabotage. Sounds like a job for the secret agents, right? You can become one today!

Participate in covert operations against the powerful corporations

Full-scale war has become economically unprofitable back in the XXth century. Modern warfare is not about giant armies or massive conflicts. Nowadays if you want to win you have to strike into the heart of your enemy, take what you need and leave before he can realize what happened. It's just business, nothing personal.

Upgrade your implants and equipment

Modern mercenaries won't be able to survive without hi-tech equipment and implants. NSI will provide you with a LP-14 standard issue laser rifle and cybernetic implants to increase your survivability. But that's not all. NSI guarantees that every useful piece of tech you'll be able to capture may and will be used to enhance your combat performance.
Popular Discussions View All (1)

jota May 17, 2017 @ 8:40am
@Wolod
I understand that I am Brazilian and many other Brazilians do not know these languages ​​so I worried a little .. well taking the translation I will be happy when the game launches if it is paid buy :3