Store Page
Arma 3 >  Workshop > harsinwhite's Workshop
This item has been removed from the community because it violates Steam Community & Content Guidelines. It is only visible to you. If you believe your item has been removed by mistake, please contact Steam Support.
This item is incompatible with Arma 3. Please see the instructions page for reasons why this item might not work within Arma 3.
Current visibility: Hidden
This item will only be visible to you, admins, and anyone marked as a creator.
Current visibility: Friends-only
This item will only be visible in searches to you, your friends, and admins. 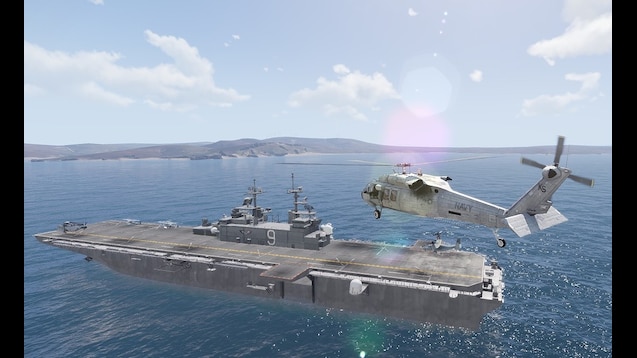 harsinwhite
Offline
See all 38 collections (some may be hidden)

This item has been added to your Subscriptions. Some games will require you to relaunch them before the item will be downloaded.
Description
This is the CUP/MELB version of my previous mission 'SAINT 4-1: Helicopter Pilot Altis'
CUP is required, MELB is optional.

Background:
NATO forces have recently captured Altis Island as a staging ground for invasion of Eurasia. We control the airfields and have established outposts across the island. Mopping up operations are underway. Remaining enemy forces are putting up bitter resistance and continue to receive reinforcement from the mainland. The local population is primarily hostile to NATO.

Situation:
You are an all-purpose rotary wing aircraft pilot in squadron HMU-86 'Saints', callsign SAINT 4-1. Your primary bases of operations are Altis International Airport and the USS WASP, anchored in the inlet to Pyrgos Gulf.

Friendly Forces:
NATO has 5 bases, 6 airfields and 17 outposts strategically located across the island. There are 3 hospitals used for medevac - at Pyrgos, Kavala, and Altis airbase. Artillery support is available throughout the island and mortar support in proximity to some bases.

Instruction Manual:
Execution:
1) Use radio to request / cancel assignment.
2) Helicopter crew can be summoned personally at HQ or via radio when near Altis Airbase helipads or on the USS WASP.
3) Helicopter loadout can be modified at that helicopter's landing pad.

Settings (can be customized at HQ at map stand):
1) Time (weather changes randomly with time)
2) Difficulty -
- no enemy AA
- light AA (armed with 1 rocket each)
- regular AA (armed with 1-4 rockets)
3) Mission Randomization - determines what kind of mission is assigned
- Helicopter specific: Only missions your helicopter type can fly will be chosen. If your helicopter has both armed and unarmed variants, you may receive either mission type
- Completely Random: Random mission assignment
- Choose by Mission Type: When you call in for a mission, you get the option to select a specific mission type from the helicopter action menu
4) Turn Radio off/on: Toggles radiochat text (as seen in cockpit). Turn off for unimpeded view of instrument panel.
5) Transfer to USS WASP - Transports you to the deck of the USS WASP, which becomes your primary base from which you fly missions. On the USS WASP flightdeck you have the option to transfer to Altis Airbase.

Notes:
1) In some helicopters, your crew will not sit in the right seats. It's okay, they're from Oklahoma. I once saw one try to feed hay to the CH53E. Just take a deep breath, speak slowly, and use the action menu to move crew to seats.
2) Opening doors: Some helicopters have moveable doors/ramps, which will need to be opened for troops to enter and exit the helicopter. This is done through the pilot action menu.
3) Rescue winching: Some missions involve rescue winching when helicopter landing is not possible (i.e. ocean rescue). This is done using the slingload function. The slingload assistant will display a 'slingloadable' target at the designated waypoint. Use the slingload command to deploy rope and hover over the target until the action is complete.
4) Anti-aircraft fire: avoid anti-aircraft fire by flying below 25m altitude.
5) Dump fuel: Fuel can be dumped to 75%, 50%, or 25% from cockpit action menu. This will increase your external weight capacity for slingloading missions. Always check the cargo weight versus the weight table on your map menu.
6) Logbook: In radio menu, keeps track of your mission details. Occasionally you fudge your kill numbers. That's your fault, not mine.
7) Gunner View: In helicopter action menu - allows you to switch seats with the gunner to manually operate the weapons. Helicopter will autohover until you take back the controls.
8) CUP - Advanced Flight Model bugs: Using AFM causes various bugs with CUP helicopters. you explode on entering the CH53E and attack helicopters. Sound is missing from the blackhawk. There may be others. Personally, I selectively turn off AFM when using these helicopters and restart it the rest of the time. <br/>

Tips:
1) Carry signalling smoke grenades, IR-strobe (at night), and an explosive charge when you fly in case you crash. These can be found in each helicopters inventory.
2) Navigation: Your journal has an overview of the mission and grid coordinates of the pertinent waypoints. Opening your journal also temporarily displays a real world waypoint marker.
3) On Search and Rescue missions your target will attempt to signal you with a smoke grenade, IR-strobe, or flare if they detect you are nearby.
4) Medevac patient injuries worsen with time during flight, so fly fast! Not everyone can be saved.
5) Position of any enemy near Landing zones will be marked on your map if known, but sometimes the information isn't completely accurate.
6) GPS coordinates will occasionally be inaccurately relayed to you, so if your troops aren't at the map marker, search for them!
7) You will learn useful tips talking to other pilots in the mission briefing room at Altis Airbase HQ. Hahaha no you won't, they're idiots.
< >
102 Comments

Nash Apr 22 @ 1:03pm
anyone having an issue loading with barbed wire or something of the like no longer existing?

Chillinthesnow Apr 12 @ 3:58pm
also all those asking about the radio you press ''0'' not acre or capslock

Chillinthesnow Apr 12 @ 3:56pm
this is the best heli mod i have ever played. would love the exact same on other maps but know the creator has stopped updating

Latt11B Apr 12 @ 8:07am
I would love for someone to create some C-130 pilot missions airdropping troops and supplies.

USMarine012 Mar 24 @ 9:59am
Hey if possible, it would be awesome to see an update of this mod. Especially with regards to the USS WASP. Absolutely love the scenario.

Jayman Mar 3 @ 10:50pm
Absolutely love this mission, was hoping it could please be updated so the USS wasp works, currently it explodes. would also love to see it ported to an afghanistan style map like lythium.
cheers !

Mighty Beast May 1, 2021 @ 3:36pm
Please update this mod with
Civilian presence
Friendly and enemy helicopters and jets when requested by the enemy
and more missions.