Greenlight > Games > humble grove's Workshop
Greenlight is being retired. For more information on how to submit games to steam, refer to this blog post.
This item has been removed from the community because it violates Steam Community & Content Guidelines. It is only visible to you. If you believe your item has been removed by mistake, please contact Steam Support.
This item is incompatible with Greenlight. Please see the instructions page for reasons why this item might not work within Greenlight.
Current visibility: Hidden
This item will only be visible to you, admins, and anyone marked as a creator.
Current visibility: Friends-only
This item will only be visible in searches to you, your friends, and admins.
29
Description Discussions0 Announcements2 Comments70 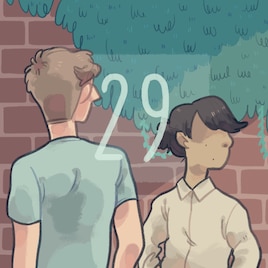 humble grove
Offline
See all 5 collections (some may be hidden)

View 29 in the store In just under a week 29 has been greenlit!
Thank you so much for all your voting and sharing. The response to the game has been really encouraging so far. You can expect a release for 29 sometime late this year, we'll announce a date closer to the time. Details about the rest of No Longer Home will come sometime around 29's release.
In the meantime you can follow the game's development on:

You can also support us via our Patreon[patreon.com], where you can get access to developer posts and rewards including access to any demos we show at events. Currently we're an unfunded team and any of your support helps a great deal.

Thank you for all of your support!

To avoid confusion we thought it be best to do some clarification on 29's price tag.
29 will be released for free as a preview to our game No Longer Home. It acts as the first chapter to No Longer Home and will be included in its eventual release.

No Longer Home will be released under its own price tag and is currently set to for five chapters. It will be released sequentially in a season pass type fashion (similar to the release of Kentucky Route Zero). No Longer Home's price currently is unset, but will likely be in the realm of $20. You can expect a release once the second chapter is complete.

Your 29 save data will work with No Longer Home, so once you buy No Longer Home you can go straight to playing the second chapter.

When chapters are released will depend heavily on our funding, but we'll be doing our best to keep a steady pace.

Thank you for your support so far!

Read More
Description
Release date: Late 2017
29 is a semi-autobiographic magical realist point and click game, that follows the personal experiences of Bo and Ao: two graduates preparing to move out of their flat. Wander through an intimate flat, examining the everyday belongings of the Bo and Ao. Delve into their thoughts and insights, and mould your interpretation of the characters, through branching multiple-choice dialogue.

Originally posted by The Guardian:
"Like memory, everything has a sheen of fiction to it. — 29 showcases the magical in the everyday domestic drudgery."

Originally posted by Kill Screen:
"There is something, not an unease but an otherworldliness, that perpetuates the piece—a finely illustrated work that unfolds like a diorama."

Originally posted by Waypoint:
"29 is a reflection on those precarious few months surrounding the end of university, channeled through a point and click aesthetic in the vein of Kentucky Route Zero."

29 has been Greenlit and is now listed in the Steam store. For the latest information, purchase options, and discussions for 29, please see it on the Steam Store or in the Steam Community.
Visit Store Page
For more details Visit Community Hub
For latest discussions
If you really, really want to, you can continue to the Greenlight page. Information on this page may be out of date, since all the action has moved to the areas noted above.