Comments
Introduction
In this alchemy handbook there are two main types of potions created: POWER POTIONS, which are used solely for leveling up alchemy and making gold. These are not for use of the player, though you may use them if you wish, but it is not recommended. Then we have UTILITY POTIONS, which are relatively cheap potions that aid the player, whether it be in combat, or crafting. These potions are usually to not be sold as they lack in value and are more useful to the player.
General Buisness
Before getting into selling, it's best to maximize your profit by getting speech buffs, as your first potions will be practically valueless. That being said, you will need to get better speech gear and buffs. The easiest speech gear to get is the thieves guild hood and the amulet of zenithar. These can both be found in and around Riften.

TO GET THE AMULET OF ZENITHAR: It is located NORTH-EAST of the Riften Stables in the mountains. See image below: 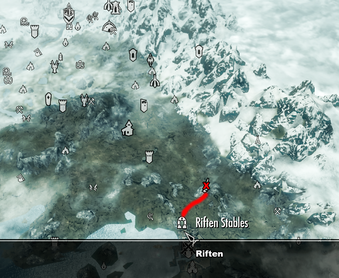 One thing to note about the shrine of zenithar is that it's guarded by a frostbite spider, which could be problematic if you're playing on higher difficulties. The easiest way to dispatch of the spider is to use range to your advantage. For extra measure you could paralyze the spider with your bow and a paralysis potion (see utility potions for more).

Still want to maximize your profit? Great, because gear is just the start of it. To maximize your profit you will need the following: Blessing of Zenithar, The Gift of Charity and a potion of fortify haggling. The Blessing of Zenithar can be obtained at any shrine of Zenithar. This buff will last for 8 in-game hours. The Gift of Charity can be obtained at any beggar when you give them gold. Finally, the potions of fortify haggling can be found randomly adventuring in skyrim, or if you're lucky apothecary merchants may have them. They can also be made by the player if need be, but early on while your alchemy levels are low, they won't be as powerful as store bought potions.

When you have a surplus of potions, it's probably best to sell them and generate income from all this potion mixing. You will notice that most cities do not have an abundance of merchants, or most merchants will not buy potions from you as they are specific merchants (blacksmith merchants, spell merchants, etc). Only alchemical and general merchants will buy potions from you. That being said, the best place to buy and sell alchemical goods is in Riften. The general merchants to go to in Riften are as follows: Bersi Honey-Hand (750), Brand-Shei (750), Elgrim (500), Hafjorg (shared with Elgrim), Grelka (750), Herluin Lothaire (500), Marise Aravel (50), Tonilia (1000 to 4000). I feel Riften is a good city to sell goods in because of the fact that you can just go through the whole town and sweep every merchant making selling less of a hassle.
Buisness Gear
Business gear is a fundamental part of alchemy. It is necessary for progressing in the field of alchemy. There are two types of business gear you will need to make for this guide. The first one being your merchant gear, see [General Business] for an easy start to merchant gear. Unfortunately, the only merchant gear you can make is the amulet, which is capped at 25% better prices, the rest has to be found. Here is the list of all the possible merchant gear that you can acquire:

The ideal set of merchant gear is as follows:

This gear will give you a total of 70% better prices. If you do not have the Dragonborn™ DLC then Volsung is your next best option, which will give you in total 65% better prices. The next ideal set of gear you need to obtain is fortify alchemy gear. This gear has to be made through enchanting and will double the power of your potions.
Power Potions
Power Potions are made solely for leveling up alchemy and getting money. Potions work in the way that: the more valuable they are, the more experience you get for making them. Here is a list of power potions:

Resist Magic
Chickens Egg
Lavender
Free Ingredients
Some stores will offer you free ingredients for competing a quest for them. Usually these quests are miniscule, like fetch quests and such. The added benefit of getting some ingredients from the vendors for free is that they always replenish every 48 hours (2 days). Here is the list of vendors which you can get free ingredients from:

Thaumaturgist's Hut (Morthal) - Complete Rare Gifts
Potion Storage
At some point in your play-through, you may find you have a surplus of potions and ingredients, taking up a lot of room in your inventory. It's best to find a place to store them at this point. Unfortunately, some houses can cost a lot of money. If you're not willing to dump a bunch of money into a house, or just want a temporary solution to your over encumbered self then do not fret. There are a few good places to store your goods for free. The first location is Anise's Cabin. This small shack is located south-west of Riverwood. It comes compete with a small farm plot, an enchanting table, an alchemy table, a bed and a cabinet to store your goods. The next location is the Alchemists Shack, located directly south of Ivarstead. Included in the shack is a bed, free alchemy ingredients that respawn, a bedside cabinet to store your goods safely, and an alchemy lab.
Closing Statements
Alchemy can be a more tiresome task in skyrim, but it is very rewarding for the player that goes through with it. Continue to explore alchemy.
< >
11 Comments

garfield king of indiana (MPNGC) Jan 7, 2021 @ 8:10am
missing what is far and away the most valuable potion in the game. garlic-nordic barnacle-salmon roe. at 15 alchemy with no perks the listed value is over 1,000 and the selling value in the hundreds. all ingredients can be found in riverwood. swim down from lake ilinalta and catch all of the salmon that are jumping up the waterfall; nordic barnacles are located on the sunken ship next to the lady stone and in the small underwater ruin near the lake exit; garlic is hanging from the houses everywhere.

dtt.scanner Mar 2, 2020 @ 7:36pm
Oh, also for the Paralysis potion: Clayjar37 is right... but I use Canis Root, Imp Stool, and Mora Topinella... because they can all be grown in your Hearthfire garden/greenhouse. Human Flesh is too rare to depend on. FYI, my boosted Paralysis/Lingering Damage Health potion paralyzes for around 3 minutes and does over 500 points of damage... which will kill most things except the strongest monsters. It is also worth around 5000 gold, and can be grown/sold pretty easily. This is not even the most expensive potion. Others are almost twice the cash value.

dtt.scanner Mar 2, 2020 @ 7:23pm
New ingredients added since this was written: VERY IMPORTANT
Gildergreen Sap and Red Canis Root will give you Fortify Alchemy. This will basically do the same thing as the Alchemy Loop glitch that was fixed by the patch. Overpower to your heart's content. My Smithing potions are now +300%, and Enchanting Potions +150% (and I stopped there upgrading my gear). Other ingredients have new skill enhancements, but less important for the Alchemist than these two.

Also, one thing that wasn't mentioned for gear was to complete the Aetherian Forge quest to get the Aetherian Circlet (+20% Enchanting). While this doesn't affect Alchemy directly, it does mean that you can improve your Alchemy crafting gear to a higher % with normal skill levels, before doing the Alchemy potion/Enchanting potion loop.

Brush Stroke May 28, 2017 @ 6:40pm
Also, once you have gotten through a couple of the thieve's guild quests, Herluin Lothare has several free ingredients that get restocked.

Brush Stroke May 28, 2017 @ 6:11pm
By the way, the recipe for Restore and Fortify Health does not need the Butterfly Wing; the Blue Mountain Flower and Wheat work fine by themselves. Also, if the Paralysis poison is made using Imp Stool and Human Flesh, a Lingering Damage Health ingredient can be added to create a poison that deals a lot of DOT, as well as paralysis.

batman Apr 27, 2017 @ 12:31am
"Brand-Shei arrested and he will no longer be able to trade, as he is permanently put in jail."
Not really, he gets arrested and after a while returns to his shop. At least that's what happened on my last 6 playthroughs