Greenlight > Games > Navigame's Workshop
Greenlight is being retired. For more information on how to submit games to steam, refer to this blog post.
This item has been removed from the community because it violates Steam Community & Content Guidelines. It is only visible to you. If you believe your item has been removed by mistake, please contact Steam Support.
This item is incompatible with Greenlight. Please see the instructions page for reasons why this item might not work within Greenlight.
Current visibility: Hidden
This item will only be visible to you, admins, and anyone marked as a creator.
Current visibility: Friends-only
This item will only be visible in searches to you, your friends, and admins.
The Pirate Mermaid
Description Discussions0 Announcements1 Comments49 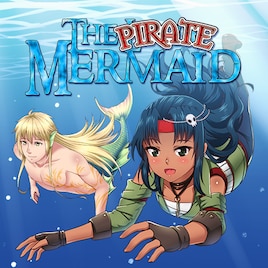 The shiny new demo for "The Pirate Mermaid" is out! Downloads and more info are available on our itch.io page[navigame.itch.io]. Comments, questions, and feedback are all welcome! Let us know what you think via the comments below, Tumblr[navigame-media.tumblr.com], our itch.io discussion board[navigame.itch.io], Lemmasoft[lemmasoft.renai.us], etc. We look forward to hearing from you all!

Read More
Description
~Become the hero or villain of your own fairytale in this fantasy otome visual novel~
Ever since your father died searching for the mermaids' treasure, you've sworn to find it yourself. Becoming a pirate was the best way of accomplishing that goal...until your crew dumped you overboard during a huge storm.

Miraculously, you are saved and find a sorcerer who will make you a magical contract - with a catch. He'll transform you into a mermaid to grab the treasure, if you bring him a red vial from the mermaids. If you fail, you'll be turned into a lobster.

Now, you have six days before the spell ends. Will you become rich beyond your wildest dreams? Fail the contract and become lobster bisque? Perhaps you'll fall in love with a mermaid prince or sorcerer...or corrupt them with your evil pirate ways.

The Pirate Mermaid is a fantasy otome visual novel with many different choices and possibilities. You could become a legendary pirate, mermaid queen, sorceress, or (heaven forbid) lobster dinner. Your actions may make the other characters into your friends or lovers...or perhaps victims and slaves.

The game contains:
Special features include:

Demos for Windows, Mac, and Linux are on our itch.io page[navigame.itch.io].

The demo is about 50k words/several hours long. It contains the entire common route, plus the first day or two from the main character routes. All of the special features (animations, partial voice acting, galleries, hints, etc.) are included, so please try it out! Comments, questions, and feedback are all welcome.

The Protagonist
VA: Danielle McRae (English), Sakuya (Japanese)
A brave, stubborn girl (you decide her name!) who became a pirate to find the treasure from her father’s stories. Her favorite things are fighting and money. Your decisions will determine whether she matures into a better person or turns truly evil.

Mikali
VA: Kodiak Spence (English), meilubin (Japanese)
A shy, gentle merman who saved the heroine from a storm. Though most mermaids hate humans, Mikali is oddly fascinated by them. (Not so) secretly the crown prince of Merrica, the biggest mermaid kingdom in all seven seas.

The Sorcerer
VA: Duffy Weber (English), Naoto Takeda (Japanese)
A magician who lives alone on an island of golden sand. He transforms the heroine into a mermaid in exchange for a mysterious red vial. Though cold and snarky at first, he may warm up over time.

Malik
VA: Valentine Stokes (English), Taichi Tanukida (Japanese)
A young merman who appears to be connected to the royals. But don’t expect him to be Prince Charming. Malik has a sadistic streak and enjoys giving everyone a hard time - especially the heroine.

Jack
VA: Brendan Blaber (English), Taichi Tanukida (Japanese)
The heroine’s greedy (but beloved?) parrot who is always getting into trouble. He turns into a “merbird” after a magical mishap involving his shiny object obsession.

Mimi
VA: Michelle Marie (English), Ayumu Yukishiro (Japanese)
A sweet young mer-maid who works at the palace and may befriend the heroine. Mimi is surprisingly clumsy for a royal servant. She’s constantly worried about getting fed to the tiger sharks by the head butler.

Ceto
VA: Marissa Lenti (English), Miu Kureha (Japanese)
Chancellor of Merrica. Until Mikali is officially coronated as king, Ceto rules in his place. She is a skilled mage and has a low tolerance for fools.

See our latest updates or get in touch with us at any of the following:
< >
49 Comments

Sanne Oct 27, 2018 @ 1:07am
Hi! I played the demo a while ago and I still remember it being really fun to play. Any new information about when the game will come out?

Navigame  [author] Oct 30, 2017 @ 9:36pm
@GCMTX
Yes, I believe so. Luckily, we were Greenlit shortly before Greenlight was retired, so Steam has sent us a submission form to use once the game is ready.

Navigame  [author] Oct 14, 2017 @ 1:31pm
@Worst Nightmare
Sorry for not seeing your comment sooner! We haven't decided the final release date yet, but will definitely make an announcement once we do. In the meantime, you can try our new demo [navigame.itch.io] and let us know if you have any feedback!

psyff101 May 23, 2017 @ 10:29pm
I just came back to Lemmasoft to check what was up with this game because I did not check it out again after playing the demo years ago and now I see that it'll be on Steam! I'm so looking forward to this! Congratulations!

Navigame  [author] May 6, 2017 @ 11:01pm
Thanks so much for helping us get Greenlit, everyone! We're super excited about bringing "The Pirate Mermaid" to Steam in the future and couldn't have done it without your support!

@Yoko
Glad to hear you're looking forward to our game! We're not sure of the release date/pricing quite yet, but will make an announcement once we finalize it.
< >